Fastest Pace Of Downgrades Ever (Since 2002) 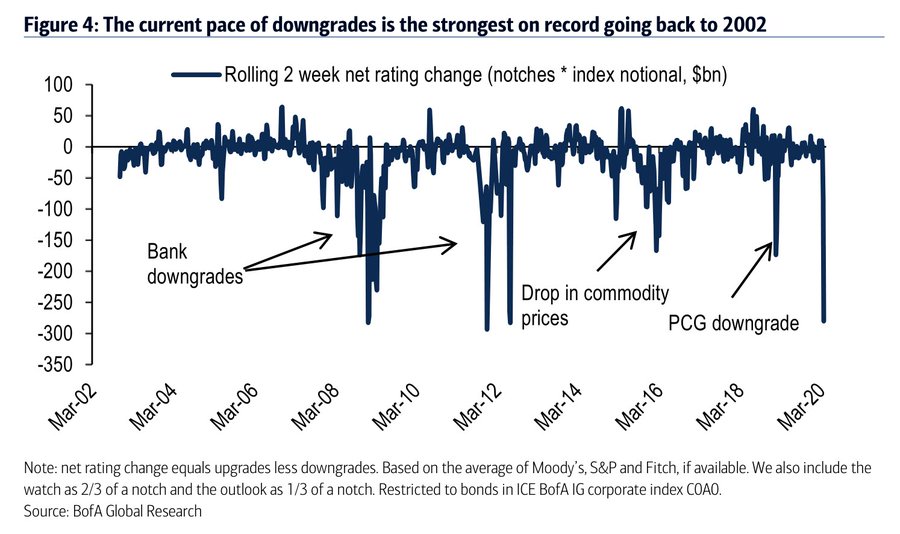 The rating agencies often receive a lot of criticism for downgrading/upgrading businesses after a negative/positive catalyst occurred. This time is slightly different because COVID-19 was an unprecedented event; it’s difficult to have expected preemptive cuts. The biggest source of criticism comes from the 2008 financial crisis in which mortgage backed securities weren’t properly rated. Even so, ratings have a strong correlation with default rates. It’s valuable to review them in a macro sense even if they can be delayed.

As you can see from the chart above, the current pace of downgrades is the strongest on record (since 2002). This is based on rolling 2 week net rating changes; the change is calculated by the number of notches changed (upgrades minus downgrades) multiplied by the notional value of the debt. This has been a record setting recession because everything happened all at once.

It’s very important to not assume the pace of stock market declines will continue at such a rate just because the crisis is only 1 month old in America. Keep in mind, that the housing sector had been weak years before the financial bailouts and Lehman Brothers failed. We got the bailouts and the Fed buying corporate bonds about a month after the crisis hit. The timeline is sped up.

A big reason there have been so many downgrades is the energy companies are highly indebted and are in trouble. Oil prices are falling because of the price war with Russia and Saudi Arabia and because the recession means demand is weak. It’s the worst case scenario for drillers. Plus, these firms hadn’t been in great shape before this as oil prices had been low. Sustained low oil prices are much worse than weak prices for a few weeks partially because of hedging. There have been $84 billion in fallen angels in March. Ford was downgraded to junk ($36 billion). There’s also Occidental Petroleum ($29 billion) which was hurt by the poor timing of its Anadarko acquisition. There also seems to be a very poorly timed acquisition to mark the top in an oil cycle, not that 2019 was close to as good for oil firms as the first half of 2014 was.

The charts below show the changes in spreads compared to the last slowdown from 2014-2016. As the top chart shows, energy high yield spreads spiked quicker than last slowdown and reached a higher point. We need the price war to end to see a serious tightening in spreads. It would also help if the recession ends quickly. Analysts have even gone as far to project negative oil prices because there is a limited amount of tanker storage capacity. Price is based on the marginal barrel and right now no one wants that barrel. Supply is way more than demand. The good news is that will work itself out through a decline in production as Chevron cut its 2020 capex guidance from $20 billion to $16 billion. Low prices should help demand, but people are stuck inside, so demand has become more inelastic than usual.

The bottom chart shows high yield spreads excluding energy. Energy dominates the high yield market as fracking was a debt bubble. Surprisingly, we’re seeing another downturn even though the bubble already burst somewhat. Notice the bottom chart has lower yields as the scale is different. Relatively speaking, other high yields have wider spreads now than the last slowdown which makes perfect sense because the 2014-2016 slowdown was about energy. This time it’s because of the oil supply shock and COVID-19. There is a recession this time unlike 2015 and 2016 which escaped one.

There was a mini scuffle on Wednesday about the fact that some workers will be making more money as unemployed than working, but the amendment to cap unemployment pay at 100% failed. It will be great for the economy if some workers earn more money. They will probably save that extra money (or pay down deb) because everything is uncertain when you don’t have a job.

The chart above is shocking because it shows 25% of households who make over $150,000 per year had no emergency savings in 2018. If you make that much money and don’t have an unusual number of dependents or very high debt levels, save your money for a rainy day. While the value of money changes depending where you live (NYC & Los Angeles are expensive), you should still be able to save some money with a high income. Tough choices might need to be made, but that’s preventing even tougher choices if you lose your job.

Markets don’t need there to be a cure to COVID-19 to stop panicking. They need uncertainty to end. Because the Chinese data wasn’t fully trusted and Italian cases were exploding, many had no idea what COVID-19 would do to the population. Now we have a better idea. There will be economic shutdowns that last a few weeks or months which help stem the growth in cases. That’s great for stocks. Italy’s stabilization correlated with the decline in volatility. The chart on the left shows the daily case growth falling. The number of new cases per day peaked on March 21st in Italy which helps us model out other countries. It’s great that the death rate in America hasn’t been as bad as Italy. (NOTE: Italy had an increase in cases on March 26th, but it stayed below its March 21st peak).

There has been a huge slew of bond downgrades especially in the energy sector which has been hit by the price war and demand destruction. This time, energy and non-energy spreads are spiking because it’s a recession and 2015-2016 was just a slowdown. Unemployment insurance will help prevent a complete economic collapse. Unemployment insurance is cyclical. It’s better to lose your job in a recession than the end of an expansion when benefits can be taken away or hard to get. Now it’s hard to file because of the call volume, but once you reach someone, you will get your benefits. Italy’s stabilization is key for stocks because it helps investors model America’s infection rate.