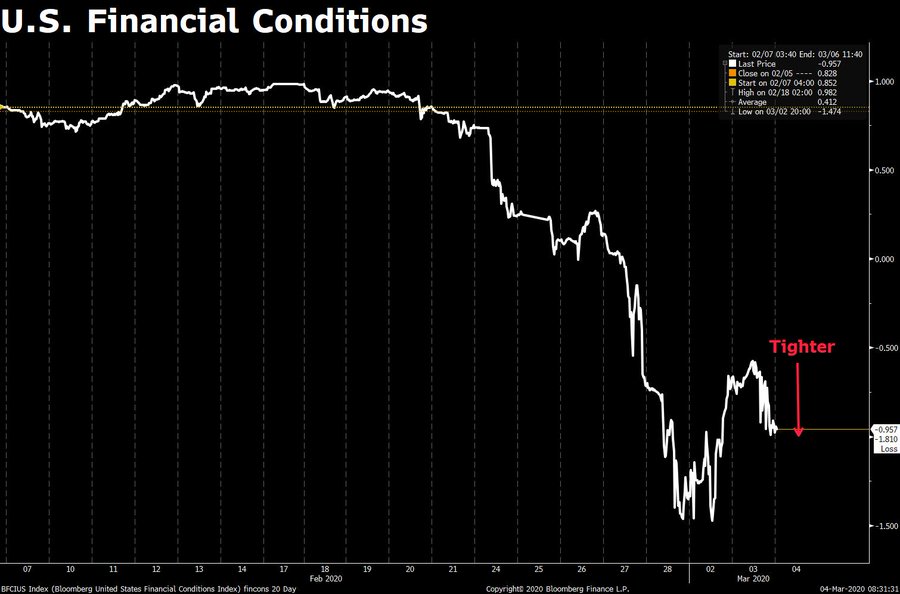 The Fed decided to use the little ammo it had to combat economic weakness by doing an emergency 50 basis point cut on Tuesday. This caused stocks to rally for a few minutes before they cratered back down. As you can see from the chart below, financial conditions have been tightening and the Fed’s rate cut did nothing to change this. That’s because despite this being the Fed’s first emergency cut in 11.5 years, the market anticipated it.

The market knows rate cuts won’t prevent the coronavirus from spreading. The help to financial conditions should have come when rate cuts were being priced in, not when they occurred. Neither happened as the antidote didn’t worked. The next step is globally synchronized fiscal measures to help small and medium sized firms deal with the temporary blow to business as many aren’t well capitalized and don’t have enough access to credit to deal with a substantial decline in earnings even if it is short term.

We didn’t expect the Fed to have emergency rate cuts before the meeting since it was just 2 weeks away. The treasury curve saw cuts coming. The entire curve was below the Fed funds rate. The inverted curves have predicted rate cuts rather than recessions. If the coronavirus spreads further, the odds of a recession will increase, but we aren’t there yet.

Some are claiming the Fed’s rate cut scared the market. We disagree because acting as expected shouldn’t be scary. Furthermore, if you suggest rate cuts cause panic, then rate hikes should cause confidence. Obviously, a rate hike would be a disaster. Perhaps what was concerning was that the Fed decided to have emergency cuts before the meeting instead of using forward guidance. This rate cut is going to help borrowers. The decline in long rates is helping home buyers and those wishing to refinance. The Fed is expected to cut rates another 25 basis points at its March 18th meeting. That would give it just 3 more cuts before hitting the zero bound. Clearly, the Fed is more concerned with the current economic issue than the amount of rate cuts it will have left after this passes.

At his press conference, Powell stated, “For us, what really matters of course is not the epidemiology but the risks to the economy. So we saw a risk to the economy and chose to act.” Furthermore, he added “The magnitude and persistence of the overall effect on the U.S. economy remain highly uncertain and the situation remains a fluid one. Against this background, the committee judged that the risks to the U.S. outlook have changed materially. In response, we have eased the stance of monetary policy to provide some more support to the economy.” The Fed’s quiet period before its rate decision later this month starts on Friday. Powell needed to get this presser right. Ultimately, the action was scoffed at by the market.

On Tuesday, the WHO raised the estimated death rate of the coronavirus from 2.3% to 3.4%. While that’s bad news, it’s good to see China has effectively suppressed its growth. There were only 119 new cases and 38 new deaths in China on the 3rd. The growth is in countries outside of China, principally in South Korea, Italy, and Iran which have 5,254; 2,263; and 1,824 active cases. Unfortunately, after falling slightly on the 2nd, the number of cases outside of China rose from 1,734 to 2,453. When the number of deaths in America increases, it undoubtedly spooks traders.

We don’t expect a lockdown scenario, but if it occurs, there would be 0% growth. At that point, few would even care about GDP growth as the loss of life is far more important. According to JP Morgan, markets are predicting a 90% chance of a recession this year and it sees a 50% chance the Fed cuts rates to 0%. It makes sense that the bond market foresees a recession, but a 12.76% decline in the S&P 500 probably doesn’t fully price in a recession yet.

The Massive Decline In The Long Bond

Long term treasury yields have been crashing. They have continued their long term trend lower in rapid fashion. As you can see from the chart below, the 10 year yield’s 14 day RSI hit 16 which is near a record low. The 10 year yield fell to 92 basis points on Wednesday morning. The decline has been accelerated by the flight to safety trade. The yield has also been falling because the dollar has been weakened by the expectations for rate cuts.

As you can see from the chart below, the US dollar Euro exchange rate has recently become correlated with the difference between the 10 year treasury yield and the 10 year bund yield.

The difference between the treasury and bund yield has fallen to the lowest point since 2017. The yields differ because of currency rates. However, it’s possible U.S. yields join most of the rest of the developed world in negative territory in the next economic slowdown.

The chart below is the same as the one above except it zooms out a few decades to help you grasp the historical significance of the move.

The peak difference between treasury yields and the bund in late 2018 was the highest since at least the last 1980s. The current difference is closer to normal. That’s the least abnormal aspect of the 10 year yield falling below 1% for the first time since at least 1871.

The Fed didn’t start with a lot of ability to deal with the current tightness in financial conditions due to the coronavirus, but it still cut rates 50 basis points on Tuesday. Its expected to cut rates again on March 18th. The Fed’s emergency cut didn’t ease financial conditions because it was expected and because it won’t prevent the coronavirus from spreading. That doesn’t mean the cut caused fear. It didn’t cause fear; it will help the economy, but not immediately. It just didn’t have an immediate impact on markets. The long bond is in the midst of an unprecedented rally as the 10 year yield fell to 92 basis points which is the lowest level in US history. Negative yields are possible.