Do Stocks Always Win In Longterm? 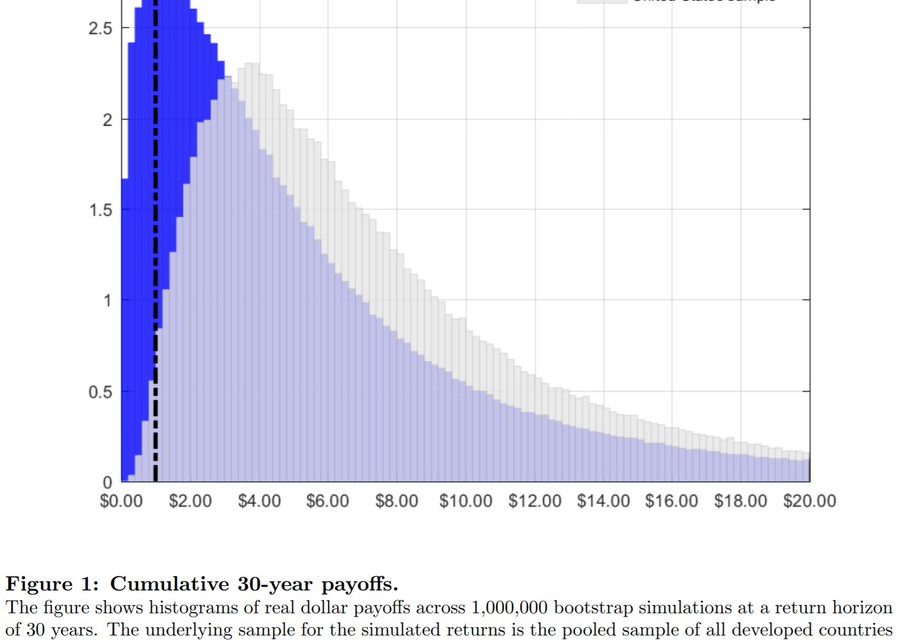 Retail sales in December were weak as headline growth was -0.7% and core growth was -1.9% (both monthly). Headline yearly growth excluding food services fell from 6.5% to 6.3% which isn’t bad. However, sales growth including food services fell from 3.7% to 2.9% which is weak. That’s to be expected because COVID-19 shutdown restaurants. Many places expanded their ‘outdoor in name only’ seating, but it’s not as comfortable as eating outside in the summer. We say in name only because there isn’t much of a difference between outdoors and indoors the way many places have it set up. This isn’t a criticism; it’s just a fact.

The chart above breaks down monthly growth in the major categories. Online sales growth was very poor probably because it’s being compared to November which was great for online retailers (Cyber Monday). This data is seasonally adjusted, but November was better than normal for online stores because of the virus. Non-store yearly sales growth fell from 26.3% to 19.2%. Food services and drinking sales growth fell from -16.6% to -21.6%. It will be even worse in January.

However, all the comps will turn on their head in March which is also when the economy might start opening up. Finally, motor vehicle and parts sales growth rose from 5.9% to 10.1%. Remember, in January card data shows apparel doing well and electronics doing poorly. Logitech just reported 85% sales growth in its Q3. We might be near a cyclical peak in spending on work from home products. January retail sales will be helped by the $600 checks. We don’t think the $300 weekly unemployment checks will have a large impact on January retail sales because most haven’t gone out yet. It could be a boon for February’s data.

14.7 million vaccine doses in America have gone out which equates to 4.5% of the country. This has catalyzed a peak in hospitalizations at exactly the time you’d expect. As you can see from the chart below, Europe is set to hit herd immunity by June. The region currently has strong lockdowns. These vaccines can’t be given out soon enough. European cyclicals will likely report weak earnings this quarter and have poor next quarter guidance.

The manufacturing sector is ramping up quickly. The slowdown the consumer experienced in December had no impact on industrial production. Yearly growth is set to be very strong when we lap the weak numbers of last spring. Monthly industrial production growth was 1.6% in December. Manufacturing growth was 0.9% despite the 1.6% decline in autos. Mining growth was 1.6% as oil showed signs of life. This might only be the beginning of mining production growth now that oil prices are in the low 50s. Utilities growth was 6.2%.

On a yearly basis, manufacturing fell 2.8% and industrial production fell 3.6%. As you can see from the chart above, 68% of manufacturing sectors were in contraction. This is still the beginning of the cyclical recovery. Look for it to accelerate when the economy fully reopens. We could easily be talking about a cyclical peak 6-12 months from now because these cycles are so short.

Wake Up Call To US Speculators

Americans have been privileged to invest in the greatest stock market ever. We’re not referring to 2020. We’re talking about the past few decades. Stock performance isn’t typically this great if you look at all countries and as far back as the data goes. According to a recent paper that used data from 39 developed countries from 1841 to 2019, there is a 12% chance a diversified investor lost to inflation in a 30 year period. That’s pretty bad because stocks are high risk. This paper questions the popular mantra that stocks always win in the long run. Depending on your time horizon, based on the past, only US stocks have more or less won in the long run. The question is whether it will be true for the future?

You can see in the chart above how much better America has done than the rest of the world. America still has a lot of great qualities that make it a great place to invest, but in the short term, there might be weakness because of the high participation among retail investors. Fintech startups love to say they are democratizing financial markets. However, getting everyone in eventually lowers future returns, depending on your time horizon. There is no golden goose where you can get everyone in and have great returns. It’s sad to say, but it’s impossible for everyone to win. It’s the same thing with index funds. If everyone invests in them, it can skew the risks of holding them as investments.

We might be near the apex of the SPAC bubble. Out of 361 SPACs since 2010, just 10 have liquidated without a deal.  Now it is tougher to find a good private company to merge with because there are so many promoters searching. For now, whatever money losing company promoters can find to do a reverse merger is beloved by the market. As you can see from the table below, Friday’s SPACs averaged a 1 day gain of 7%.

The December retail sales report was poor. It will be interesting to see how the $600 stimulus checks help retail sales in January. The recovery will come quickly as hospitalizations have peaked and the vaccine is being deployed rapidly. Europe should hit herd immunity by June and America could get there earlier. The industrial production report was great. Cycles are so short; the next thing to look for will be a peak in a few quarters. Excluding American stocks in the past, owning stocks for the long run is far from a guaranteed way to beat inflation. The SPAC bubble got even bigger in January.