Credit Card Delinquencies Not A Problem? 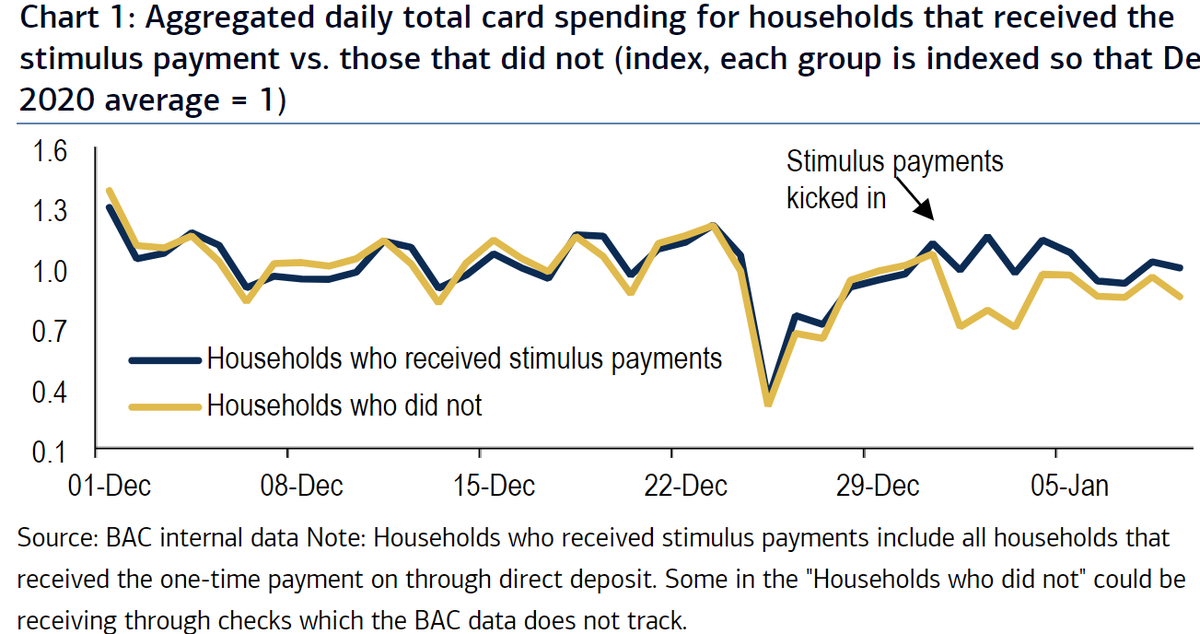 We’ve discussed in prior articles how consumers aren’t leveraged. However, when someone loses their job even if they only owe a small amount on their credit cards, it becomes a big problem. Luckily, last year the government came to the rescue with very strong unemployment benefits that paid some people more than their normal job did.

The slide above from Bank of America shows the latest developments. Credit card delinquencies fell from March through July as we had a recovery along with $600 weekly unemployment checks from the federal government. From August to early Q4 delinquencies increased maybe because the unemployment checks expired. Since then, they have fallen (outside of 90+ day delinquencies). That’s surprising because the economy got much worse in December as there were job losses for the first time in the recovery.

Amazingly, in Q4 2020 the population 5-29 days past due was 31% lower than the prior year. It mostly worked out for consumers because they came into the recession deleveraged and the government came to the rescue. The recession was so bad that it forced the government to act which allowed us to avoid a lot of the weakness.

Retail Sales Should Bounce In January

In the week of January 16th, Redbook same store sales growth only rose a tick to 2.2%. However, we think spending increased more than that. Congress dithered last year, but it just managed to do the right thing in time as the labor market has been weakening in the past few weeks.

If it wasn’t for the 2nd stimulus, there could have been a double dip recession threat. Instead, the consumer will manage to get through this weak period which probably will end in about two months which is about how long it should take until the economy reopens. As you can see from the chart above, in mid-January, the $300 in weekly unemployment checks just started going out. They should all start going out by the end of the month (through mid-March), meaning consumer spending should ramp throughout the month even though some have already spent their $600 checks.

As you can see from the chart below, the stimulus payments kicked in at the start of the year. It looks like rather than seeing a bump up, consumers who got the checks didn’t see a downturn. This is likely a seasonal issue as people probably typically spend less money in the first few days of the year (follows a holiday). Since the retail sales report is seasonally adjusted, we can expect a bounce in January especially compared to December which was weak. Of course, restaurant sales will still be in trouble until the economy reopens sometime around March.

The chart below shows the same data, but adds in the growth gap (and has a different scale) to emphasize the difference. In a not so shocking turn of events, the working poor, lower-middle class, and middle class will all spend money after they get it.

If you invest in retail stocks and care about quarterly results, you will want to pay attention to the chart below. It shows the changes in spending habits between the first stimulus checks which were $1,200 to the $600 checks that just went out.

As you can see, those who got the checks last year had large spending growth in online electronics as compared to people who didn’t get the checks. People were just getting used to the work from home situation which meant they needed to buy computers and electronic accessories. Intel just reported a large jump in profits related to strong PC sales. In the quarter ending in December, PC sales with Intel chips inside were up 33%. That’s the backdrop for January as millions of people already bought electronics the prior year. That being said, with the 2021 checks, there was still a jump in spending on online electronics. It just wasn’t as large as the last one.

This time, there was a much bigger spike in spending on clothing from people who got the checks versus people who didn’t. Bank of America card data shows spending on clothing increased 19.5% (yearly) in the week ending January 9th which was up from 15.1% growth in the prior week. We think people anticipate a return to normalcy later this year, so they are preparing for gatherings by buying clothing. If that’s the case in January, we think the trend will further exacerbate in the $1,400 checks that will be given out in Biden’s stimulus. Depending on when those checks go out, we might get a large jump in spending on clothes and at restaurants. Little additional spending will be on online electronics and home improvements.

We don’t know exactly when the $1,400 checks will go out, but it definitely won’t be in January and probably won’t be in the first half of February. The chart below shows the survey responses to where people say they will spend the money.

Only 3% said they would buy non-essentials, but the “pay bills” option is a bit vague. Many traders were expecting to see a spike in risky stock investing in early January due to the $600 stimulus. That has happened, but it may have happened without the stimulus. We might not see the same speculation with these $1,400 checks because people will have more spending options such as going to restaurants indoors. The chart shows that 3% would speculate in stocks and another 3% would put it in their retirement funds. A lot of that decision will be determined by how stocks are doing. If the S&P 500 falls 15% (hypothetically), people will be less likely to invest new money.

The Bank of Japan now owns 53.3% of all Japanese government bonds. That has caused net debt to fall to 89% of GDP from 140% in 2011. The BOJ owns close to 7% of all Japanese equities. You can see all those data points in the chart below. The Bank of Japan is in a quandary because buying more stocks will have negative consequences. This is no longer about theoretical monetary policy. The BOJ could own everything. You can see in the first few months of 2020, the BOJ didn’t increase its ownership percentage. Maybe that will continue.

Credit card delinquencies aren’t signaling an issue. The weekly $300 unemployment checks started to go out in mid-January. Those who got the $600 checks spent more in the first half of January compared to those who didn’t relative to how much they were spending before the checks went out. The $600 checks were spent differently than the first round. The next round ($1,400 checks) will show further differences as the economy will be reopened or close to reopening when they go out. If the BOJ buys more stocks, it will cause big issues in the Japanese economy.