Is The Consumer Credit Cycle Turning?

Before we get into the details of this article which will be on the consumer credit market, it’s important to review the valuation of the stock market because the more expensive it gets, the riskier it becomes. If default rates were rising and the stock market was cheap based on normalized earnings using the average historical margins, it wouldn’t be cause for concern. It’s weird to think of that possibility now because most investors associate a recession with a collapsing stock market like what happened in the early 2000s and 2008. The recession in the early 2000s wasn’t traumatic by most historical measures, but stocks fell sharply because they reached the most expensive valuations ever. Unfortunately, due to central bank interventionism in the form of quantitative easing, we are once again in an expensive market where a recession could cause crashing stock prices. The Shiller PE is at 30.60 as of September 2017 which is nearly double the median of 16.12 and average of 16.76.

The chart below is one differentiated example of how expensive stocks have gotten this year. It shows a breakdown of various markets’ performance across the globe. 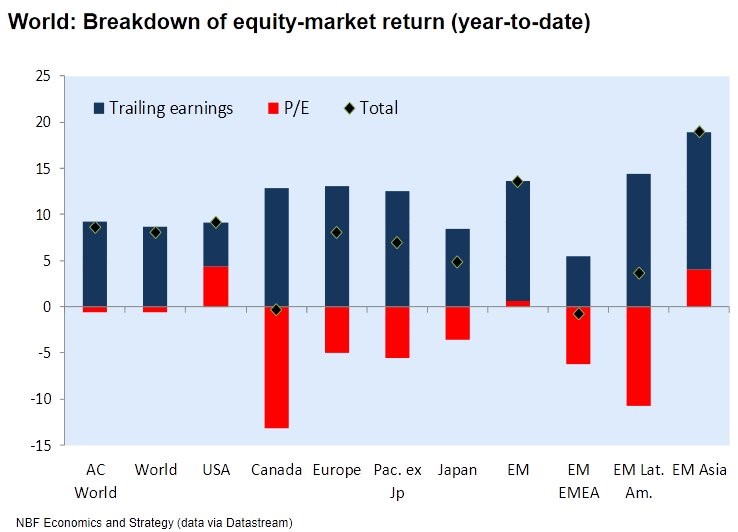 Changes In Earnings And Multiples

The black dot is the performance year to date. The blue and red bars combined get you there. The red bar is multiple expansion/contraction meaning when investors pay more/less for the same earnings. The blue bar is earnings growth/declines which is when firms earn more/less profits than the prior period. The chart shows that multiple expansions in the US were the largest this year out of every area in the world. That’s a dangerous trend which likely won’t continue as investors find value internationally.

Moving on to the consumer credit side to get a better understanding of the timing of the credit cycle, the chart below shows the relationship between jobless claims and consumer loan charge-offs.

Let’s look at two example of consumer credit firms to get a detailed picture of what is going on in the market. This will show us results from Q2 which will help us figure out what will occur in the next economy-wide report. The chart below shows the net charge-offs from Capital One. They are increasing, which is a bad sign. 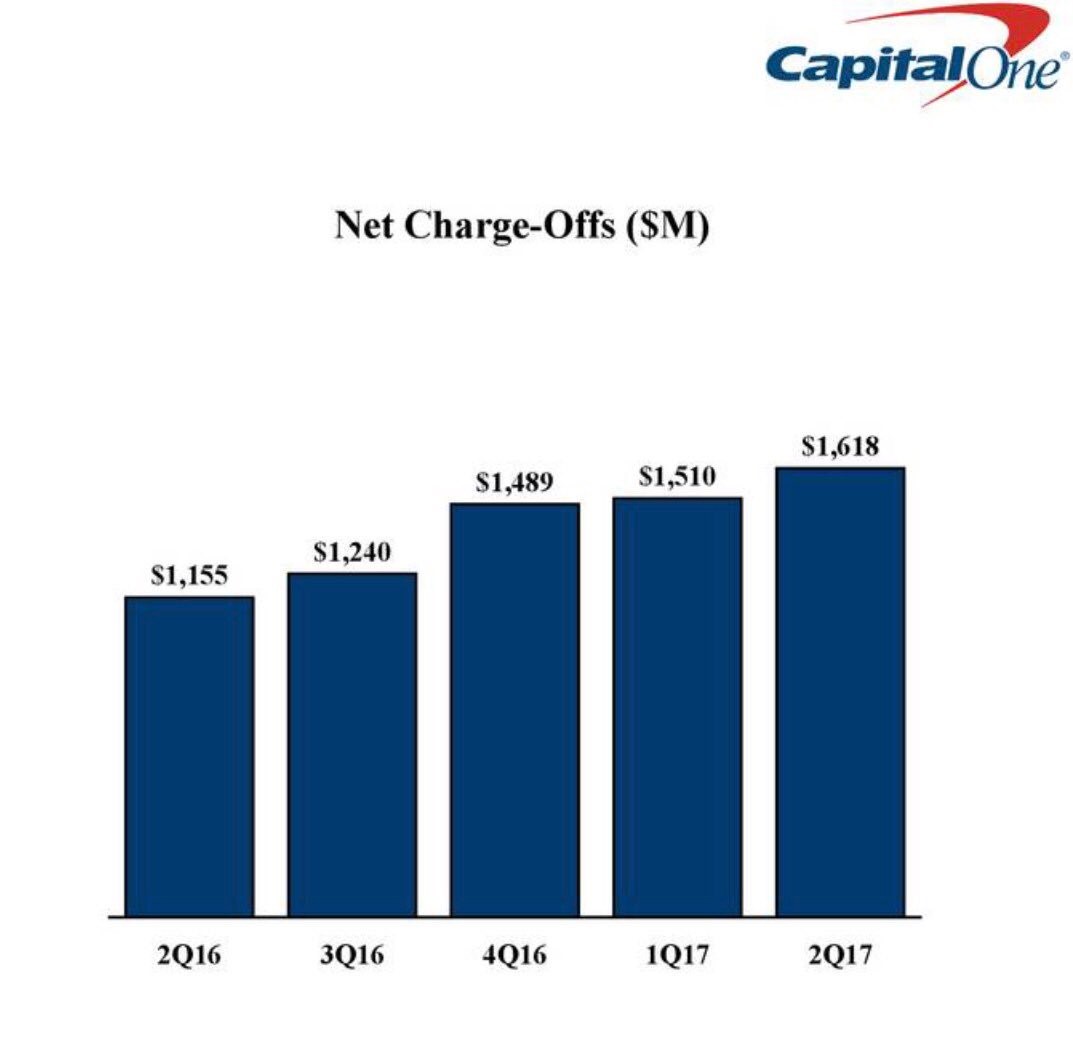 The domestic credit card charge-off rate is 5.11% which is down 3 basis points from last quarter, but is up 104 basis points from Q2 2016. Comparing the numbers to last year’s data is better because it corrects for seasonality. Clearly Capital One is underperforming the overall market and signals potential deterioration in the consumer credit market. The auto loan charge-offs were up 6 basis points sequentially and 50 basis points from last year. The auto loan bubble is $1.2 trillion. It along with student loans can cause credit card default rates to spike as the consumer’s balance sheet is weak and it runs out of cash despite a strong labor market. Current jobless claims are 233,000. Comparing this cycle to the last one, the charge-off rate on U.S. Capital One cards was 4.31% when jobless claims were 360,000 in Q4 2007. Jobless claims were higher and charge-offs were lower. This indicates that the jobless claims data might be a false flag making the economy look better than it is.

The chart below is from Synchrony Financial which is another consumer credit firm. 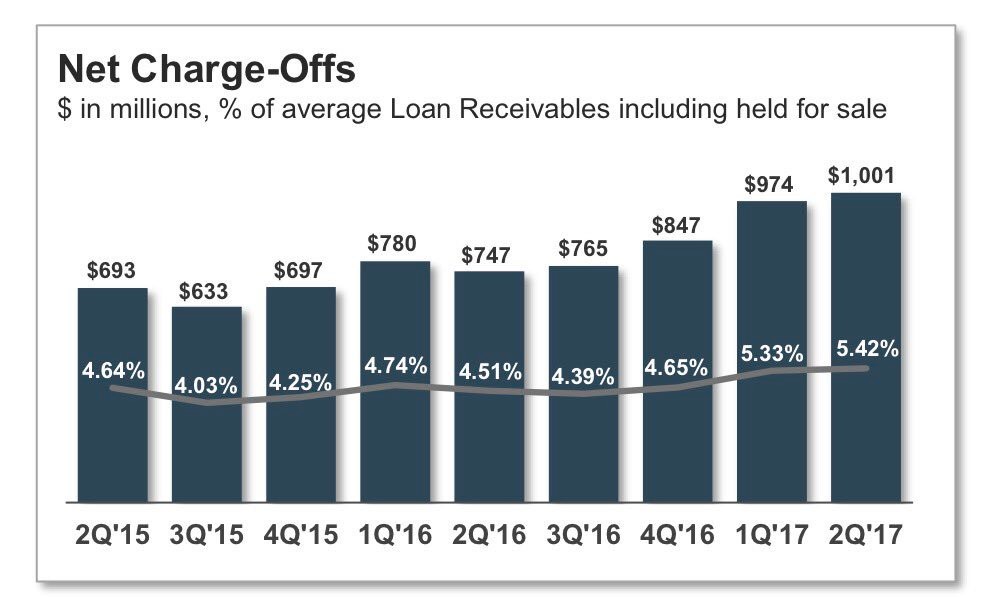 Finally, let’s look at the retail unsecured debt market to see a potential catalyst for weakness in the corporate debt market. Retail has been decimated by Amazon and Wal-Mart as their economies of scale allow them to offer the lowest prices. The chart below shows the recovery rates of unsecured retail debt compared to the whole market. 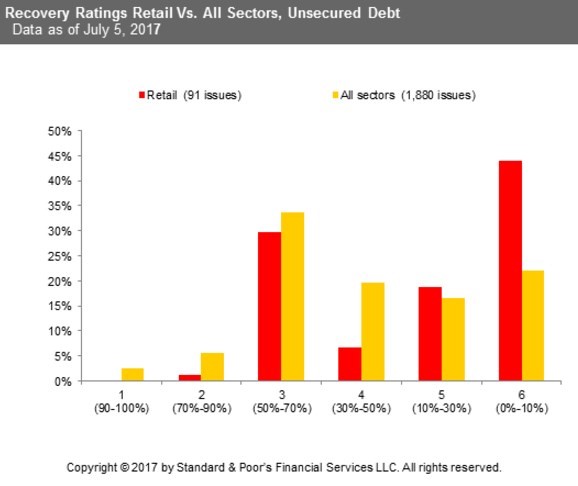 The recovery rates are lower. A recovery rate is the amount of capital a lender receives after the borrower defaults. The reason for these low recovery rates is that retailers are asset light. This makes borrowers dependent on cash flows. When the firm is defaulting, the cash flows run dry and there’s not much for the lender to seize. Recoveries are 50% lower than average. That will put a dent in the market when these firms default. 18% of retailers have a CCC rating or lower which is about double last year, meaning trouble is brewing.

The stock market is following the labor market so it is moving higher. However, the labor market might be a false flag because the consumer credit market is showing increases in defaults. Even though the corporate bond market is strong, retailers are threatening it with their low recovery rates. These are the negative catalysts which might force the stock market’s expensive valuation lower.