Can US Continue To Outperform Global Equity Markets? 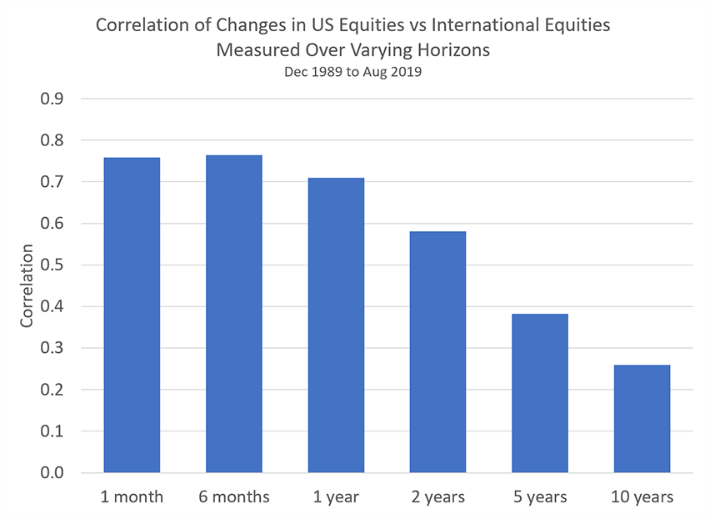 It’s common for the Fed’s long term projections for the economy to change cyclically. The long term isn’t so long. It’s not impossible for new information to change your opinion on the long term, but you shouldn’t change it because the economy is going through a normal cycle. As it turns out, on earnings growth, fund managers have this same issue as the chart below shows.

This explains why you need to know the ins and outs of how forecasts change. Earnings estimates usually start out in the double digits before falling when guidance and economic data give us a better idea of where estimates should be. Then the estimates are lowered just enough that they are beaten soundly.

The most important takeaway from this section is that predictions are very difficult to make and there is a myriad of ways they are faulty. Try to understand how things usually work to get a grasp on what matters. Demographics matter as they alter the labor force participation rate. The rate of change of earnings estimates and how much firms beat estimates matter. Long term EPS estimates don’t matter.

One of the most common investment calls now is that long term S&P 500 returns are going to be low. S&P 500 returns beg to differ recently. It’s a big mistake to invest solely on valuations and act as if there is no cyclical timing element to investing. To be clear, it’s not wrong to say the annual return on the S&P 500 will be 4% in the next 10 years based on valuations. However, it’s wrong to immediately change your investments based on that because if the cycle doesn’t oblige, you could miss out on a few years of gains. If someone would have sold U.S. stocks a few years ago because they were expensive, they would have had a huge opportunity cost. There’s nothing wrong with looking at valuations, but just know that there could be a few years where the trend goes against you if you don’t look at the cycle.

US Stocks Have Outperformed For Years

Even the relative performance of the US stock market versus international equity markets is cyclical. The chart below shows the point we made earlier about US stocks outperforming other markets.

It’s not just that the S&P 500 is up in recent years. It has been a great relative bet compared to international stocks. It’s important to understand that one can maintain the fact that the US market should have a higher multiple than most markets, while still calling for it to underperform because you expect the relative valuation gap to shrink.

The US stock market includes more tech than Europe which gives it a higher multiple. America is also a more stable country than most emerging markets. Steer clear of those who don’t understand why the US gets a premium and ignore those who think the US market will always outperform because of the reasons it gets that premium.

Just by looking at markets daily, it’s confusing to see how far US stocks have gotten from international markets because it seems like they usually trade the same way. Many times the Asian markets follow what American markets did the previous day and many times US markets follow what Europe did earlier in the day. It turns out, this is true as since 1989, U.S. equities have a high correlation with foreign markets over 1 month, 6 month, and 1 year time frames. When you move out longer, correlations break down as the fundamentals and even cyclical factors play a role in differentiating performance.

At the meetings in late October where the Fed cut rates, “most” Fed members stated they see the recent rate cuts as enough “to support the outlook of moderate growth, a strong labor market, and inflation near the Committee’s symmetric 2 percent objective.” Current policy “likely would remain as long as incoming information about the economy did not result in a material reassessment of the economic outlook.” In other words, the Fed doesn’t see the need to cut more with the current backdrop. Since then, the economic data has gotten worse and stocks have rallied. If the Fed just follow stocks, it will do nothing. Obviously, that policy would be based on the premise that investors are right to call for growth to accelerate next year. The Fed is waiting to see how its cuts impact the economy since it thinks there is upwards of a one year delay from when policy is set to when it impacts the economy.

The Fed stated policy isn’t on a pre-set course because of Powell’s mistake late last year when he said the balance sheet unwind was on autopilot. That was a big mistake on his part. Without the autopilot comment and the hike in December, the 20% decline in the S&P 500 could have been avoided. In the October Minutes, the Fed said the economy was in a fairly strong position. The Fed prognosis could look poorly if Q4 GDP growth is very weak. It cited the strong consumer and the healthy labor market. It must not be looking at the decline in demand for temporary workers. That existed a month ago.

Finally, on risk factors, the Fed sees, “the downside risks surrounding the economic outlook as elevated, further underscoring the case for a rate cut.” It stated, weak business investment and exports came from “weakness in global growth and elevated uncertainty regarding trade developments.” Then it said, both issues have “eased somewhat.” The Fed was bullish on trade a month ago since the prospects looked much better than they do now. The Fed probably wouldn’t say the same thing today. On October 11th media headlines stated that the phase one deal was done in principal. Now the deal doesn’t look nearly as close to being done.

It’s no surprise earnings growth was weak in 2019 because of the tough comparisons. Be careful of investing just based on long term valuation calls as they have failed us in the past few years. Pay attention to cyclical changes as well. Not only have U.S. stocks rallied, they have outperformed international stocks. Global markets are correlated in the short term, but diverge as you go out longer. The Fed doesn’t plan to cut rates or hike them soon, according to the October FOMC. Markets will probably react negatively if the Fed isn’t planning on cutting rates if the Q4 GDP report shows low growth. However, it might still be the right move if growth rebounds.