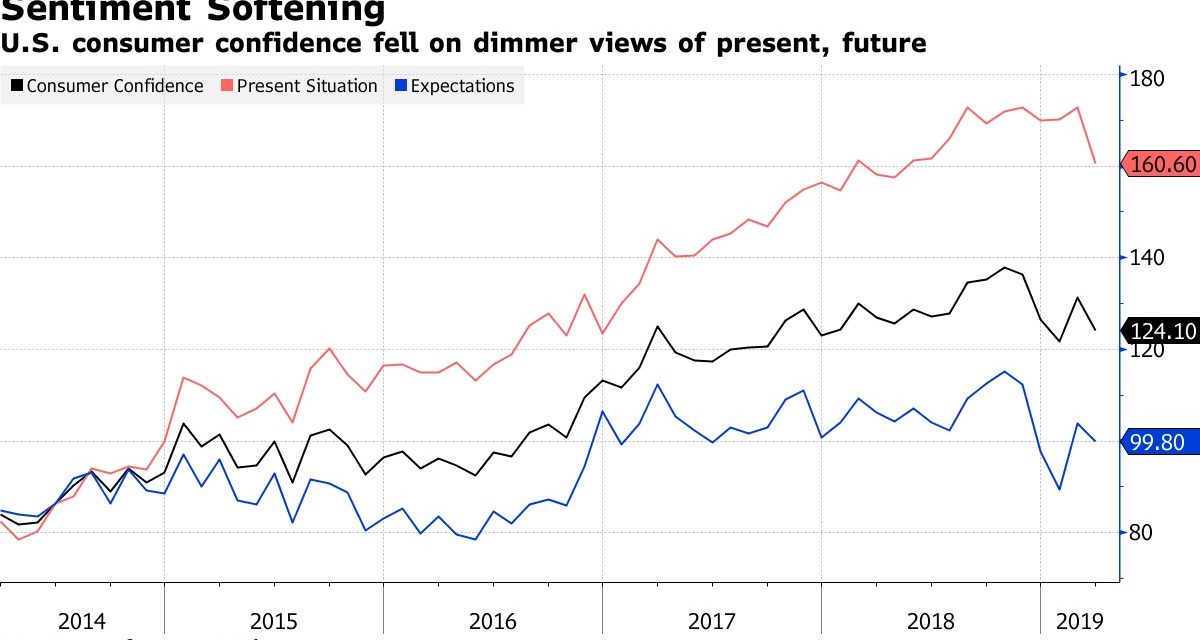 On the heels of an improvement in consumer confidence as shown in the preliminary University of Michigan report, the Conference Board report showed weakness. As the chart below shows, the overall index fell from 131.4 to 124.1 which missed estimates for 133.

Some economists only follow what consumers say about the labor market because that’s what consumers know best. This was the weakest part of the report as those saying jobs were hard to get increased 2% to 13.7% and those saying jobs are plentiful fell 3.7% to 42%. Those results are still okay, but the differential was the weakest since July. This sentiment reading echoes the February BLS report which showed only 20,000 jobs created, but differs from the solid jobless claims readings.

The cutoff date for the confidence survey was March 14th. That means this weakness is in tune with the Redbook same store sales report. Same store sales growth was just 4.2% to start March which was the weakest reading in 8 months. The good news is it has rebounded since then as growth was 5.3% in the latest report. That provides hope for retail sales and consumer confidence.

Another interesting tidbit from this report is buying plans for houses and autos increased. Plans to buy a house increase 0.7% to 6.1%. Maybe the decline in interest rates and the decline in home price growth is finally motivating buyers to enter the market. There was a big 1.7% increase in buying plans for cars as it is now 14.1%. The auto industry has been very weak to start the year, so any sign of improvement is good.

The March BLS report will be the most important monthly labor market reading in a while because there are legitimate questions about the job market given how weak the February reading, which showed 20,000 jobs created, was. As you can see in the chart below, mentions of labor market costs on quarterly earnings calls have been elevated in the past few quarters.

Consumer confidence should improve if the labor market adds more jobs than it did in February. Job creation needs to meet its 3 month average to help confidence. Keep in mind, this tight labor market will continue to be tough on labor intensive industries even though it hasn’t elevated overall inflation.

Speaking of inflation, the Conference Board report showed inflation estimates increased from 4.3% to 4.5%. That’s an odd reading considering the weakness in yearly CPI inflation and core CPI inflation. The February PCE inflation reading that the Fed focuses on the most will be released this Friday. Expectations are for yearly PCE inflation of 1.4% and yearly core PCE inflation of 1.9%. These estimates are usually met given how delayed the report is. However, as you can see from the chart below, gas prices could increase headline inflation as the national average price of gas has increased 43 straight days without declining. That’s the longest streak since 2011. Higher gas prices could hurt the consumer.

February housing starts were weak because of the West which had a near record amount of rain. Housing starts were 1.162 million which was down from 1.273 million and missed estimates for 1.201 million. At least the January reading was revised up from 1.23 million. Permits fell from 1.317 million to 1.296 million, narrowly missing estimates for 1.3 million. January permits were revised lower from 1.345 million. Somehow, even though both missed estimates, the Atlanta Fed GDP Nowcast reacted to this report by increasing its expectation for real residential investment growth from 0.6% to 1.3%. That pushed the overall estimate for GDP growth from 1.2% to 1.3%.

The charts below break down how bad the housing market was in the West because of bad weather. To be clear, SF stands for ‘single family’. Starts in the West fell 9.4% year over year and permits fell 22% even though permits usually aren’t as affected by the weather as much as starts.

On a yearly basis, starts and permits were up 7.8% and 10.7% in the South. The South is the biggest housing market, implying this would have been a decent report if the West didn’t have weather issues. Despite the weakness in the West, single family permits were the same as January (an 821,000 rate). Single family starts fell 17% monthly to 805,000. That’s terrible for residential investment despite what the Nowcast implies. Multi-family starts increased to 357,000, but permits fell to 475,000. Total countrywide completions increased 1.1%; the increase was driven by multifamily units.

The Chinese manufacturing economy is in disaster mode as industrial profits at large scale firms fell 14% yearly in January and February. That’s compared to a 1.9% decline in December and 10.3% growth in 2018. China’s stimulus isn’t doing anything to improve growth. Profits in the manufacturing industry fell 15.7% with a 42% decline in the auto industry.

As you can see from the chart below, Chinese manufacturing new exports orders are declining at the quickest rate since 2009.

The IHS Markit Chinese business outlook increased slightly in February from its record low in October. A net 16% of businesses expect activity to increase in the next year which is up from 14%. Earlier in the month, we saw China’s services PMI fall from 50.9 to 50.7 which was the slowest growth in 4 months. Marginal growth in services and big declines in manufacturing aren’t a good combination.

Consumer confidence was mostly weak, but the Redbook same store sales growth improvement in the back half of March signals retail sales growth could be solid. Wage growth is high and gas prices are falling. The March BLS report is huge. February housing starts and permits weren’t bad when you exclude the West which dealt with extreme weather. The Chinese manufacturing sector is cratering. 2019 GDP growth is set to be worse than 2018 growth despite the stimulus.