A V-Shaped Recovery In Housing? 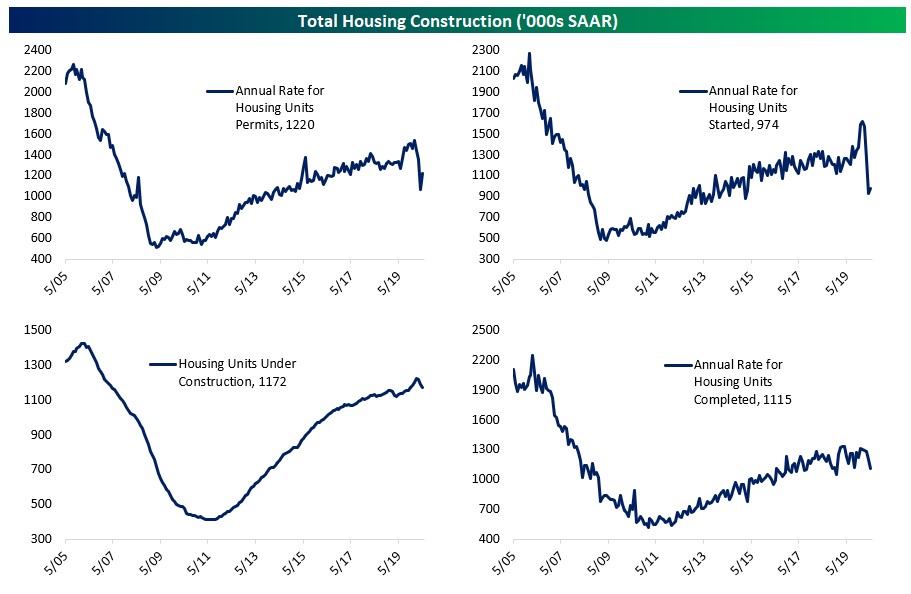 The economy as a whole certainly hasn’t fully recovered from this recession, but some housing stats already have. The housing market came into this recession in fantastic shape and is coming out of it right where it left off. Housing’s strength supports the theory that whatever caused the previous recession is the most likely to do well in the next cycle. This is similar to how tech has had monster returns ever since the 2007-09 recession because it catalyzed the 2001 recession. Massive weakness leads to better practices and only the strongest firms surviving. It’s difficult to say what will be strong after this current recession because no sector caused it. The leisure and hospitality industry was dealt a blow, but there weren’t enough failures to compare it to the past 2 recessions. The other possibility is energy. These firms dealt with very low oil & gas prices.

The MBA housing applications index in the week of June 12th was amazing again. Weekly growth in the composite index was 8% which followed 9.3% growth the prior week. Refinancing was up 10% weekly after increasing 11% the prior week. This is due to the exceedingly low 30 year fixed rate. The average rate in the week of June 18th was 3.13% which was a record low. The fear and uncertainty which is causing investors to pile into the long treasury bond is boosting housing demand. Refinances provide a nice decline in monthly expenses for home owners with a mortgage.

We’re more concerned with purchases since buying a home signals that person’s economic situation is strong and signals the lender is willing to give out loans. Banks have a record amount of cash because of government stimulus and because of the high uncertainty. Retail customers saved at a 33% clip in April which was a record high. People have had less products and services to spend money on as checking accounts with less than $5,000 now have 40% more money in them than before the pandemic. The PPP money also went to banks accounts. Essentially, this is the opposite of a banking crisis as banks have more cash than they can lend. There was a record $865 billion increase in deposits in April as the chart above shows (that size of an increase never occurred in one year).

As you can see from the chart above, home purchase applications hit a new cycle high. This is already more than a V-shaped recovery as the index is at an 11 year high. The banks should lend to a qualified buyers as certainty improves. As of May, standards were still tightening as the chart below shows. The mortgage credit availability index fell 3.1% (falling is tightening). That being said, the housing demand that temporarily went away in March and April is back. It looks like very few people who were considering buying a home before the pandemic gave up on the idea. They just delayed the purchased. The purchase applications index was up 4% weekly after increasing 5% the previous week. Yearly growth was 8%.

Real Estate Showings Are Back

Obviously, one of the biggest problems with buying a house in a pandemic is being able to go out and see it in person. As you can see from the chart below, real estate showings are back now that the economy is mostly reopened. The current weekly average is above last year’s average. When the economy is fully reopened and more people are comfortable, we might see showings spike even further.

Besides the banking system and the consumer, the housing market is important because of its impact on GDP growth. The Dow Jones Homebuilders index reflects the improvement in this part of the economy. It’s up 81% since the March low. The May housing starts report was weak. High demand and a small increase in supply means higher prices which eventually increases supply. The chart below shows the drop in inventory across major metro areas. This implies housing starts have room to increase.

There were 974,000 housing starts in May which was up from 934,000 in April and missed estimates for 1.1 million. Housing permits were 1.22 million which was up from 1.066 million which slightly missed estimates for 1.25 million. The initial period after the worst of the COVID-19 crisis passed was a boon for home improvement as people worked on improving their homes since they couldn’t go out. Home Depot stock is now up 12% year to date, wildly outperforming the S&P 500’s 4% loss.

Whenever something new happens, people speculate on what this means for the long term. Optimistic stock investors, for instance, are completely looking past the economic impact of the virus. Many have been wondering for weeks if people will leave cities. Remember, the virus worries are combined with the increased ability to work from home. According to realtor.com, searches for houses in suburban zip codes are up 13% which doubled the growth rate in cities. Over half of the top 100 cities are seeing increased interest in the suburbs.  That being said, cities are more likely to have COVID-19 restrictions which would temporarily discourage people from buying houses there.

As you can see from the chart above, contracts to buy Manhattan co-ops fell 80% and condo deals fell 83%. However, the lockdown outlawed face to face real estate showings. Realistically, this type of decline won’t continue. This data is emblematic of a market that isn’t working. We’ll see a better picture in June as phase 2 of the reopening started Monday. New York City is a great case study because this is the hardest hit area by COVID-19. If its real estate market recovers, markets in all cities will also recover.

The MBA purchase applications data suggests a full V-shaped recovery in housing. If deposits are so strong, you might be wondering why bank stocks are weak. It’s because rates are so low. Default rates could increase and lending can’t possibly match the spike in deposits. Despite this mostly great housing data, 30% of Americans missed housing payments in June according to Apartment List, which is an online rental platform.

It’s quite amazing that amidst this great rush to buy houses due to low rates, 37% of renters and 26% of homeowners are at least somewhat worried they will face eviction in the next 6 months. This amazingly correlates with the euphoria in stock buying despite the decline in the fundamentals. Finally, we have some initial data on housing, but it’s way to soon to say if there will be a mass exodus from cities. According to our Twitter poll, 53% of 75 followers said people will not move away from cities en masse because of COVID-19 (47% said they would).