The Economy Needs Another Stimulus 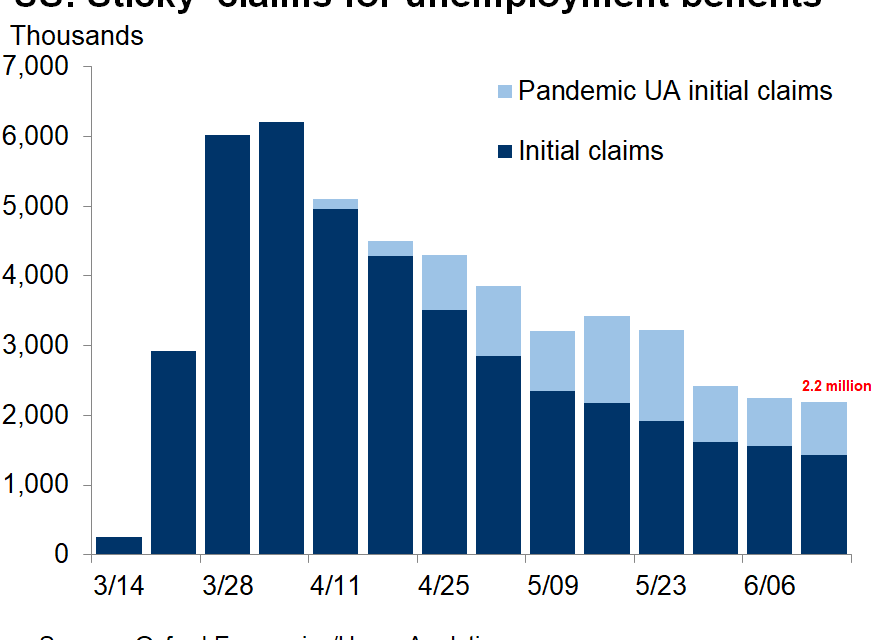 The jobless claims report was terrible on a rate of change basis. This is only one week of bad data, but if it continues, we won’t see anywhere close to a V-shaped recovery. Firstly, in the week of June 6th, initial claims were revised up from 1.542 million to 1.566 million. In the week of June 13th, claims only fell to 1.508 million which was a 3.7% decline. While this was the 11th straight decline, which is the longest streak ever, this was the lowest decline on a percentage basis (since the streak started). Claims were dramatically above estimates for 1.22 million. It would be a disaster to see claims stay this high. The economy is in a recovery phase, but this recovery is worse than the peak of every recession since 1967 based on claims.

Furthermore, as you can see from the chart above, there were 761,000 pandemic assistance claims which is 66,000 above the prior week. The total is 2.2 million which is only a slight decline from the first week of June. This initial claims report is the survey week of the BLS June labor report. That could be a bad sign for that report. It’s very difficult to predict that because the data is so volatile and the response rate to the survey is low. It will be interesting to see how the recent spike in COVID-19 cases in the South and the West impact the labor market over the next month.

Continued claims were also very high as they fell just 62,000 to 20.544 million which is a 0.3% decline. This reading is from the first week of June. Next week’s report is the one that matches the BLS survey week. Last month’s survey week had a huge decline in continued claims which may have related to the great reading. Since that survey week, claims are only down 297,000. Just like how Apple closing some of its stores made the prospect of a renewed shutdown real for stock traders, a weak labor report would tell them a quick V-shaped recovery isn’t a guarantee.

The U.S. economy only avoided a disaster in April and May because of fiscal and monetary help. To be sure, the economy was weak, but when we mention a disaster, we’re referring to a hole that can’t easily be climbed out of. The housing crisis was a disaster for the people who foreclosed for years. In contrast, during this recession, because of fiscal help many people made more income than normal.

It would be terrible for the economy if Congress decided the Federal unemployment insurance and direct checks need to end. That’s probably unlikely because this is an election year. Keep in mind, just because the economy bounced off the low doesn’t mean it’s in good shape. Current initial claims are double the previous record (triple if you include pandemic claims). The extra $600 per week in unemployment benefits end in the end of July. If paying most people more than they usually make from working is a problem, maybe adjust the benefit to $300 per week. Given the recent stock market rally, it’s obvious the market expects another fiscal stimulus. Therefore, if a mediocre one passes, it could be fall. The argument that people are staying home even though they could get a job (without virus risk) is hampered by the recent spike in cases.

The chart on the left shows past and projected quarterly disposable income growth with and without additional stimulus.

The chart on the right shows the projected GDP trajectory with and without stimulus. Without stimulus, the economy would take a step back and it wouldn’t recover the lost growth even by the end of 2021. There will probably be some deal; the variable is its size. The clock is definitely ticking though. Look for added volatility in stocks if there is any doubt about a package passing. There is probably slightly less of a chance of a bill passing compared to last time because the stock market has recovered and the economy is in better shape. If the stock market needs to fall to get something to pass, it will!

Powell Will Not Shrink The Balance Sheet

Fed chair Powell said the Fed will freeze the size of the balance sheet when QE is over. It doesn’t plan to shrink it like it did at the end of the last expansion. He noted, “There have been market reactions when we try to shrink the size of the balance sheet.” For the very small amount the Fed ended up shrinking the balance sheet compared to the large reaction it got from markets in Q4 2018, it makes little sense to shrink it. Keep in mind, this statement applies to markets in a few years as the Fed wouldn’t think of QT until at least 2022-2023 anyway. Powell might not even be chair at that point.

As you can see from the chart below, Morgan Stanley sees the Fed’s balance sheet reaching $10.3 trillion by 2021. The small decline like what occurred in 2018 and 2019 won’t happen in the future. By freezing the balance sheet, it will shrink as a percentage of the economy (because the economy grows almost every year).

The jobless claims report was bad. If we see continued claims stagnate in the next report, it increases the likelihood that the June labor report won’t be that strong. The economy needs fiscal help. The Congress is likely to deliver it. The size of the help will determine the market’s reaction. If Congress can’t work something out, we will see a sharp decline in stocks. The Fed isn’t planning to do QT in the next expansion. Obviously, we are years away from that even being a consideration anyway. Powell just wanted to assure the market. Forward guidance is meant to impact today’s market. The prediction might not come true. It’s possible a new Fed chair could do QT a few years from now.