Will Stocks Underperform In 2020? 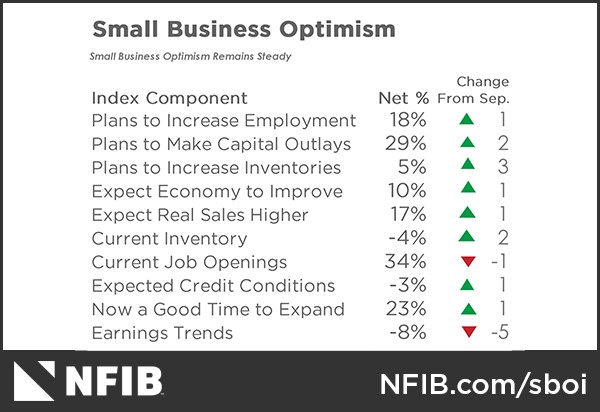 The NFIB small business index is significantly off its cycle peak, but it’s still relatively strong. In October, it increased from 101.8 to 102.4 which beat estimates for 102. In the past 3 cycles, the readings before recessions were 98.3, 98.3, and 94.4. Small business confidence isn’t a leading index. It coincides with the weakness in the economy. It didn’t really fall much in the 2001 recession, but was hit hard in the recessions in the early 1990s and the late 2000s. The NFIB index tends to do better under Republicans. If a Democrat wins the election in 2020, expect this index to plummet. That shouldn’t make you bearish though as firms still need to respond to demand (not politics). That being said, the 2020 election has been listed by firms as a catalyst for uncertainty. Let’s see if it replaces the trade war as a common complaint.

The table below shows the components of the NFIB survey.

This one is tough to read because even though 8 out 10 components increased sequentially, the net percentage expecting improved “earnings trends” fell 5 points to -8%. That’s a really important component. It’s arguably more important than the 3 point increase in plans to increase inventories and the 2 point increase in current inventory. However, you can say real sales and capex expectations are better than last month and the main reason earnings are expected to fall is the tight labor market. 25% of small businesses mentioned labor quality as their most important problem. This is one of the highest readings since the survey was started in 1974. Wage growth is surpassing margins, but firms still have plans to increase employment.

The NFIB employment survey tells us the same thing the September JOLTS report did. Both showed openings are off their peak, but the labor market is still tight. As you can see from the chart below, the percentage of firms with “1 or more hard to fill jobs” is falling. It’s usually inversely correlated with the unemployment rate.

Check the right y axis to see the rate going down as the index gets higher. On the other hand, 60% of small businesses stated they were hiring or trying to hire which is up 3 points from September. Furthermore, 88% of those hiring or trying to hire stated there were few or no qualified applicants for the positions they need to fill. Maybe some openings are being removed because firms don’t think they can fill them. This is all because the labor market is nearly full.

Sometimes fund managers in the Bank of America poll accurately predict changes to the economy. This is one investor sentiment survey which shouldn’t be approached from a contrarian mindset most of the time. Often times, assets listed as the most crowded trade underperform after being named. The November report shows managers have capitulated on their positions as they have gone bullish. The recession predictions are mostly gone as managers have bought this market. Many managers probably had to catch up to their benchmarks because they underperformed by being bearish this summer/fall. All these funds going bullish limits the upside potential for the market because there are fewer bearish investors to turn bullish. When the bulls win, they really lose because stocks climb the wall of worry, not the wall of confidence.

Fund managers lowered their cash position from 5% to 4.2% which is the biggest monthly decline in cash since Trump’s 2016 election. Recently, we saw the biggest rise in the 10 year yield since Trump’s election. Keep in mind, that this isn’t about politics. The cyclical economy bottomed in early to mid 2016. Investors feared the election so they didn’t buy stocks as quickly as they are now. Investors see a cyclical turnaround in 2020 just like they saw acceleration in 2017. In tune with our point that this bull market has a bit less fuel, the cash positioning was the lowest since June 2013.

S&P 500 predictions have improved. The level it’s expected to peak at increased from 3,166 to 3,266. That’s 5.6% more upside instead of just 2.4%. That’s still relatively bearish. Why even talk about a peak if a recession isn’t expected soon? As you can see from the chart below, the percentage saying the S&P 500 peaked already at 3,030 fell from about 29% to about 8%. Those predicting a top at that level were wrong.

The Global Cyclical Expansion Of 2020

The theme of the past few articles we’ve written is that markets see a new global cyclical expansion in 2020. This Bank of America survey supports this thesis. Fund managers were very bearish on the economy earlier in the year. As you can see from the chart below, in late 2018/early 2019 the net percentage of managers expecting a stronger real global economy in the next year was the lowest since the financial crisis. Lately, there has been a change of heart.

The net percentage expecting a stronger real global economy in the next year rose from -37% to 6% which is the biggest monthly increase ever. The survey was started in 1994. Getting to our point that this survey is valuable to follow not fade, the ISM PMI has increased 8 to 9 points on average in the following 6 months after major resets to growth expectations. The previous resets were in December 2001, June 2005, and May 2009. This implies the ISM PMI will rise to 56.

The small business index improved slightly. The results were mostly positive although firms soured on earnings trends. Fund managers have reversed course as they have become more bullish after being pretty bearish earlier in the year. On the one hand, there are fewer bears to convert to bulls. These conversions provide fuel to rallies. On the other hand, substantial changes to growth estimates usually mean there will be a big jump in the ISM PMI. Stocks do well when the manufacturing PMI is low and poorly when it is high. That means stocks might rally as the PMI starts to increase, but run out of momentum when it gets higher.