Valuations In The 98th Percentile 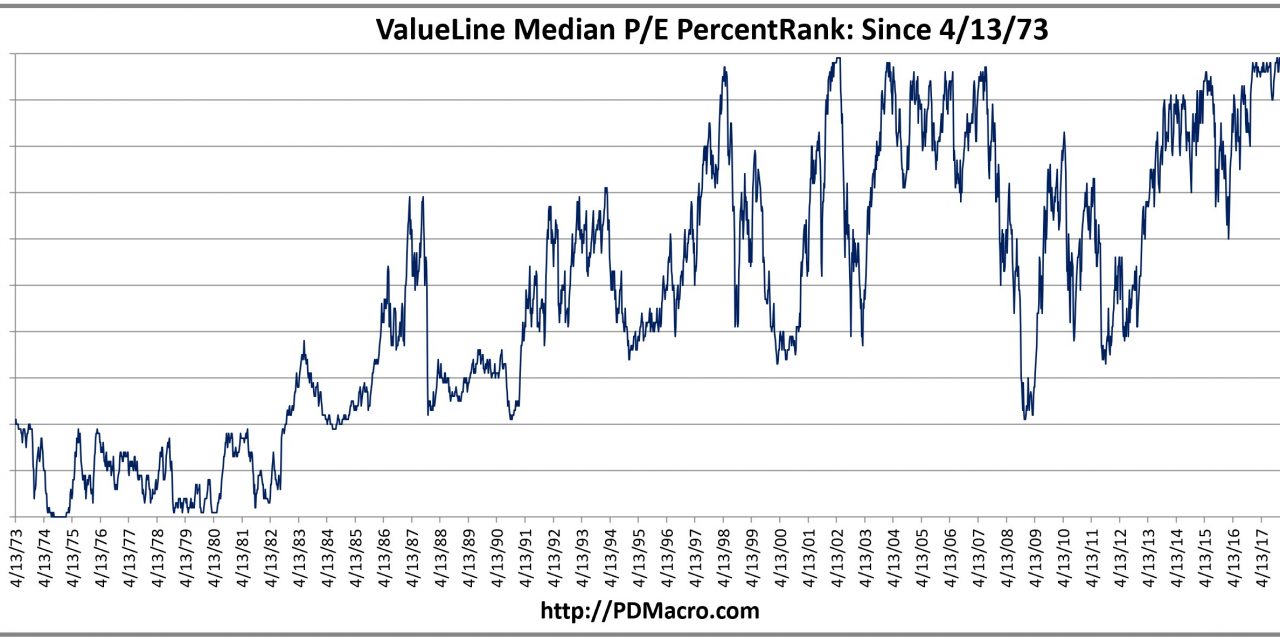 COVID-19 is still a crisis for a few southern and western states as the graph of new U.S. cases now has a 2nd hump. This isn’t a 2nd wave. This is a spike in cases in areas which weren’t as deeply affected by the spike in April. The 3 day moving average of new cases per day spiked to 35,299 which is slightly below the peak in April which was 35,513. Cases have spiked recently because the declines in the northeast and the Midwest can’t overcome the spikes in the west and the south. The 7 day average of daily deaths didn’t fall as it stayed at 620. That’s still the lowest since March 31st when the virus was in its initial ascent.

Deaths lag new cases, Houston has seen a spike in hospitalization. As the number of people in the intensive care unit increase, so will deaths. The good news is doctors have more experience treating this virus which might be lowering the death rate. The other aspect that is lowering deaths is the people who are getting it are younger. As you can see from the chart below, the weekly median age of people who tested positive in Florida fell from 50 on May 3rd to 35 on June 14th. Young people are less likely to die, so they are taking more risks by being social.

It’s extremely important to note that the number of deaths shouldn’t be the threshold by which we measure success. Thousands of people overrunning hospitals and getting very sick doesn’t mean the virus is over. Even if the new deaths per day don’t increase much, economic activity will still decline in the areas most impacted by this virus even if there isn’t a shutdown. People don’t want to end up in the hospital.

Remember how everyone makes a big deal about the death of value stocks and the greatness of growth stocks, but the performance is highly correlated to sector weighting? The same issue might be in place for ESG investing. To be clear, ESG investing stands for environment, and social, governance. This means companies don’t try to make a profit at all costs (hurting the environment) and enrich management rather than shareholders. The goal is to take care of the environment and align management incentives with long term performance.

ESG is the 2nd most important trend in finance with the first being the movement to index funds. You can see how strong the trend is by looking at the performance of MSCI stock which benefits from it. In the past 5 years, MSCI stock is up 420%, while the S&P 500 is up 44%. The goal of ESG investing isn’t necessarily higher performance, but it wouldn’t hurt. JP Morgan made an interesting point with the chart above. As you can see, The US ESG index has almost identical performance to the tech sector in relation to the energy sector. All that work was done almost for nothing if you’re looking at returns. However, it does motivate firms to take care of the environment and shareholder rights, so it probably does have a positive impact.

On the one hand, energy companies produce a lot of carbon dioxide and other pollutants. The shale industry is known for management teams getting rich even as their firms go bust. On the other hand, tech firms like all firms use the energy produced. Should energy get a bad reputation because it produces the substance or should the users get the bad rap? If tech companies didn’t demand energy, energy firms would be out of business. Furthermore, tech companies are known for giving out juicy stock-based compensation packages, making them not look like expenses even though they are. This dilutes shareholder value.

On Twitter we have discussions with bulls who like stocks because the economy is on a cyclical uptrend. We counter that valuations are high. This counterpoint is ignored. Normally, it’s a great time to buy stocks right after recessions, but stocks have never gotten this expensive this quickly. The Nasdaq hit a new record high, even though not everyone even agrees the recession is over. It seems wrong to ignore the size and scope of this rally especially since it has led to high multiples. On the other hand, interest rates are low which lowers the discount rate in discounted free cash flow analysis. It also lowers the cost of capital.

2 weeks ago, the ValueLine median stock’s PE ratio hit a record high of 21.5. The median stock had a higher PE ratio than ever before. This data goes back to 1973. The median PE ratio is now in the 98th percentile as the chart below shows. On the other hand, you can’t expect stocks to be as cheap as they were in the 1970s and 1980s when interest rates were much higher.

Not Smooth Sailing For Small Firms

With the stock market doing well, it’s easy to forget about small firms which are still struggling. The good news is median cash balances for small firms are only down at about a 5% annualized rate as of the end of April which is near the decline before the crisis. On the other hand, revenues are down over 40% (expenses are down almost 50%). The city with biggest median decline in small firm cash balances was Atlanta which is in the mid teens. Seattle had over a 4% increase by the end of April which was the best city. As you can see from the chart below, restaurants and personal services had over 30% declines in cash balances. Revenues for personal services firms fell almost 80%. Healthcare had the biggest increase in cash balances (almost 15% gain).

COVID-19 remains an issue for much of the country. Younger people are getting it which is resulting in fewer deaths. However, we should want to lower hospitalizations along with deaths. ESG investing equates to going overweight tech and underweight energy. The median stock’s PE ratio is in the 98th percentile going back to 1973. Small businesses were in bad shape as of the end of April.