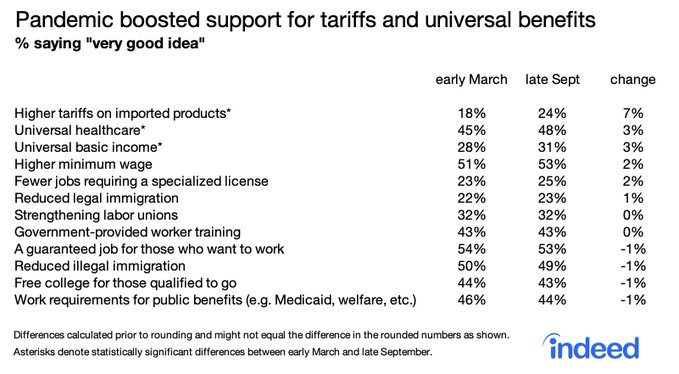 The yield curve (2s & 10s) recently became the steepest since June and the 10 year yield is at its highest point since June. As you can see from the chart below, the 10 year yield hit 82 basis points which is just below the 6 month high of 90.2 basis points on June 5th. That peak in June was right before the spike in COVID-19 cases this summer which we now call the 2nd wave. Back in early June, there was hope for a full economic recovery. There were worries about a 2nd wave in the winter, but few expected one to occur so soon.

Now we see in the new COVID-19 economy that many cyclical stocks don’t do well and the consumer needs stimulus to keep spending. From that top in the reopening stocks & yields in early June until the end of August, the stay a home stocks rallied further. We discovered that the rate of change of COVID-19 cases and deaths don’t matter much to the market. What matters is that there are enough cases to keep the new normal going. Even when COVID-19 cases & deaths were low in August, the economy wasn’t back to normal. That’s partially because businesses don’t want liability risk and politicians are afraid of putting constituents at risk. The other issue is when cases are falling people are afraid they will increase again because they have in the past.

Speeding up to October, we see the long bond is selling off because of a potential fiscal stimulus. The debate between the White House and Nancy Pelosi is mostly theater. The markets know a stimulus is coming one way or another. Both sides support it; no matter who wins the election, a plan is coming early next year. Of course, there’s also a chance one passes before the election. Investors don’t care when in happens as long as the uncertainty of whether it will happen is gone. Actual people facing economic hardships don’t have that privilege.

The other aspect of the long bond selloff (reflation trade) is the potential for the economy to reopen next year because of therapeutics. If you believe yields will increase and the curve will steepen, the best way to play that is buying banks.

The housing market is one fire. We have been singing the same tune for a few months. Interest rates are low, some people are leaving cities for single family homes in the suburbs, and millennials are at the age where people buy their first house (lower 30s). Demographics power long term housing trends. However, keep in mind, this is made possible by low rates.

There were 1.415 million housing starts in September which was down slightly from the original August reading, but up from the negative revision of 1.388 million. Permits rose from 1.476 million to 1.553 million which was a new cycle high. As the chart below shows, the spike in permits is coming along with the spike in residential construction spending.

As the chart shows, permits are much lower than the last cycle boom. Don’t fear a bubble burst just because homebuilder optimism is at a record high. The truth is new home supply isn’t coming nearly as fast, so we don’t need to worry about a bubble. As you can see, record low interest rates have created the most affordable housing market in 45 years in terms of monthly payments for workers. This is slightly misleading because higher prices brought by lower rates make it harder to put 20% down. First time buyers put 7% down on average which means they need to pay PMI (private mortgage insurance) which adds to the monthly cost.

Because of income inequality and the MMT (modern monetary theory) movement, which isn’t concerned with fiscal deficits, there has been a shift on the left of the political spectrum towards a universal basic income and other benefit programs. As you can see from the Indeed table below, 31% of people think a universal basic income is a very good idea. That’s up 3 points from early March. The big surprise is the shift came from Republicans. This plan has likely become more popular because COVID-19 caused more government dependence and because the fiscal stimulus worked well.

One Day The Money Was Gone

Sometimes even after following markets for decades, you see something new. You always need to expect the unexpected. As you can see from the chart below, world oil and gas dividends fell 60% which made the decline after the 2014-16 bust look puny.

Fracking & OPEC (temporarily) created excess oil supply and the COVID-19 crash crushed demand. The safest dividend payers such as Shell cut their payments for the first time in decades. Times have changed dramatically. We’ve previously discussed how energy has underperformed every other sector here.

This Is Not Normal

We’ve noticed after every decline this year retail speculators keep coming back. They have been well trained by the market to buy the dip. This is textbook human psychology. Only the most skeptical investors have been able to withstand the tidal wave of buying. Small investors are all in again. As you can see from the chart below, this is the 3rd spike in the single stock call to put ratio from small traders this year. Each spike this year has been the highest in 5 years. This isn’t normal just because it keeps happening in 2020. This won’t last. There are too many optimistic retail traders.

The reflation trade is here because of the hope for a fiscal stimulus and therapeutics that allow the economy to fully reopen next year. The 10 year yield doesn’t move as easily as stocks do, which shows the hype might be for real. It makes sense because both sides of the aisle support a stimulus. Housing permits hit a new cycle high. Low rates have made housing more affordable. The COVID-19 economy made Republicans more likely to support a universal basic income plan. Oil and gas dividends fell by 60% this year. Retail speculation is here again. The speculators know to buy the dip. They are back asking the market for more profits.