Overseas Earnings and Technology Is Rallying The Stock Market Higher 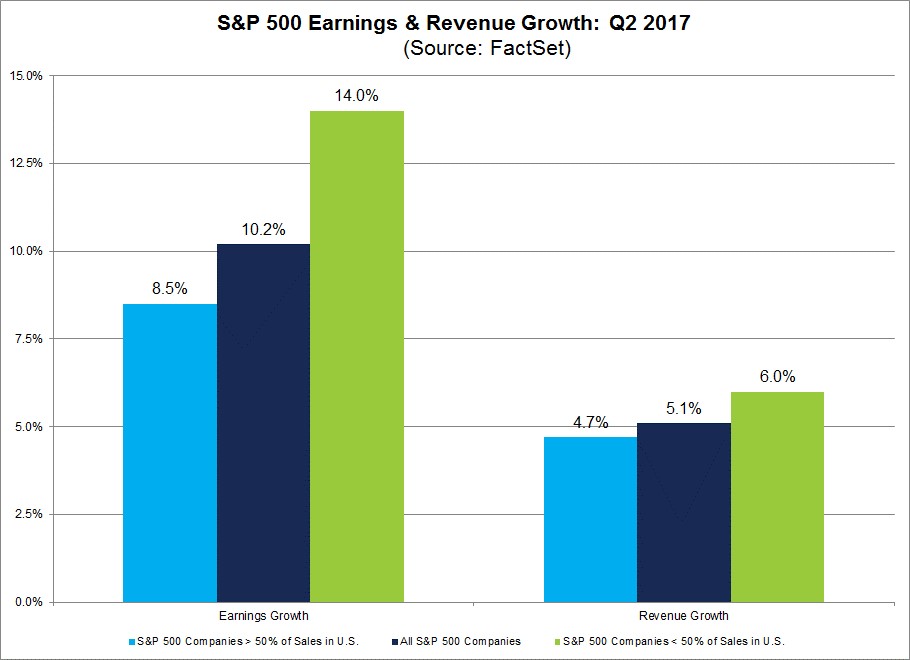 Earnings season is almost over as Q2 showed mostly great results. We’ll look at the trends this earnings season to forecast where the economy is headed. Sagging corporate profits spur layoffs, while earnings growth continues economic expansion. First let’s look at the specific results of the quarter. It was a great one as reported bottom up S&P 500 earnings were $26.99. That’s 15.9% year over year growth. After the multiple expansion we had in 2015-2016, there has been a slight multiple compression as earnings grew faster than stock prices rise. However, stocks are not solely affected by earnings. They are also affected by sentiment.

Speaking of confidence, the indicators which measure it have become less reliable when it comes to reflecting the performance of the economy. The correlation of consumer confidence to the economy is non-existent. President Trump has given us a great experiment in what would happen if not much economic reform is passed, but the rhetoric is improved. What you end up seeing is a rising stock market, improved credit markets, and higher consumer confidence. While those are good things, actual consumer spending improvements and economic growth without monetary policy stimulus would be better. Unsurprisingly, talk doesn’t work as much as action. There have been some regulatory changes, but nothing has been done on healthcare or taxes. 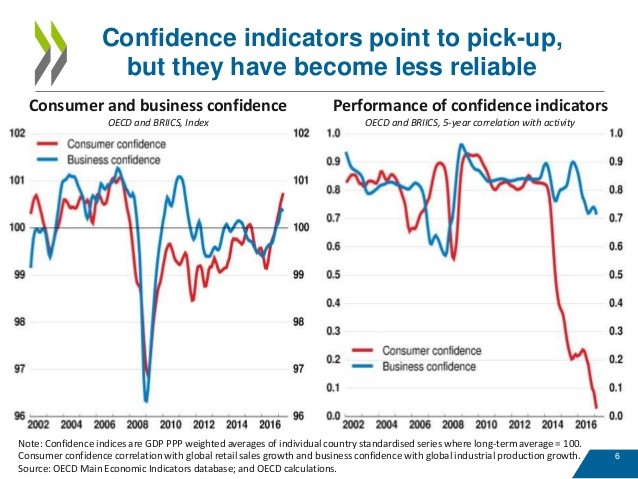 The most interesting statistic of the earnings season is that, for the first time since Q2 2000, firms that beat EPS and sales were down the next day after they reported compared to the S&P 500. That’s an unusual stat which might be reflective of excessive optimism not being met. If a stock goes down on an earnings beat, it’s likely because the run-up in anticipation of the report was too much and the “whisper numbers” were too high. Earnings are usually judged compared to company guidance and analysts’ expectations. However, they aren’t always what the market is looking at. Whisper numbers are often higher than estimates as the market looks to clues such as the competition or channel checks to make what it feels is a better guess on earnings and sales. This excessive optimism doesn’t mean stocks are bound to fall in the near future because we’d probably need earnings to weaken for a sizeable correction to occur. 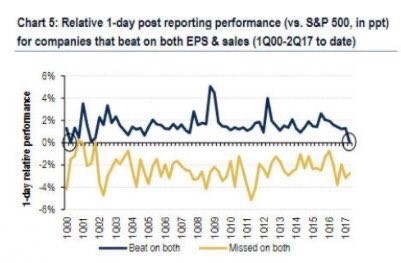 Looking at future results, the value of the dollar will determine where sales growth is headed in the future. This isn’t a perfect correlation like the chart indicates because during 2008, the recession caused the flight to safety trade where investors bought dollars and sold stocks. This is a case of the tail sometimes wagging the dog. President Trump’s goal appears to be to weaken the dollar as he said “I think our dollar is getting too strong, and partially that’s my fault because people have confidence in me. But that’s hurting — that will hurt ultimately.” He likes a weak dollar because it helps exports. Keep in mind, the chart’s right hand side showing the DXY index is inverted meaning a weak dollar helps sales growth. The reason why all three examples have the dollar falling year over year is because the dollar has been falling for the past 6 months. 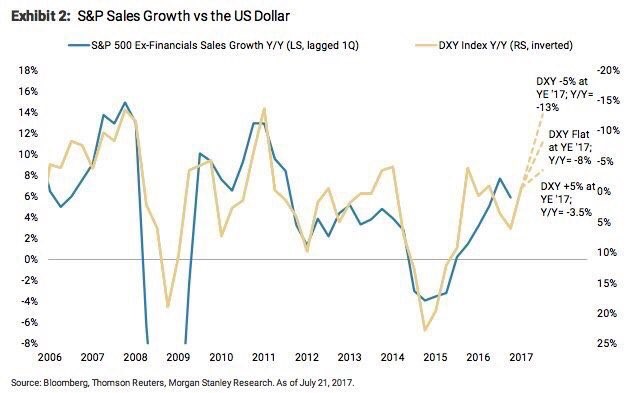 Sales Growth Is Greatly Impacted By The Dollar

We know that the source of earnings growth is margin improvements and the weak dollar. Breaking that down further, the firms with the most sales abroad are doing the best, signaling international economies are stronger than the US economy. Firms with greater than 50% of sales abroad had higher sales growth as well as greater margin expansion. Looking at this from a micro perspective, these results are driven by technology. Not only are global firms doing well, but on the flipside these numbers show international profits were up because of firms like Alphabet and Microsoft who have large overseas businesses which are doing well almost everywhere.

There has been a big turnaround in the past year in global semiconductor billings and major advanced computer and electronics output which is spurring increased profit growth in the tech sector. Technology is the leading sector in most countries. It might be time to break up the technology sector into different segments for purposes of analysis because it is growing so rapidly. Don’t confuse this with excessive optimism in the 1990s. If you look at most sectors, they all have technology related to them. For instance the computing power in cars just shows how the world has evolved since the tech boom of the late 90s. Plus, you have a sector with firms which are unrelated. Should Texas Instruments, a semiconductor firm, be in the same sector as Facebook which is an advertising company which has a virtual reality division? The point is recognizing that the strength in the technology sector is broader based than it’s given credit for if you just look at it as one sector among many. The profit numbers support this as the sector contributed 20.92% of profits in Q2 2017 to the S&P 500 which is more than any other sector, including energy, materials, telecommunications, utilities, and real estate combined. 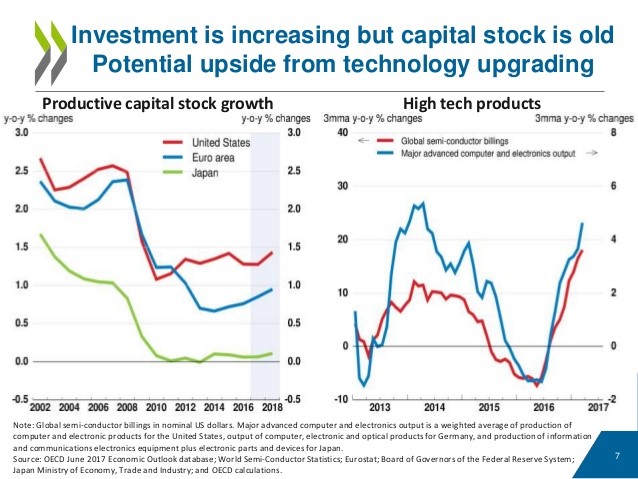 Earnings season was great in Q2 as technology drove results. It’s worrisome that stocks fell when they beat earnings and sales estimates. It implies the market is overheated. Don’t conclude that the market is in the same position as Q2 2000 because we’d need an earnings slowdown to accompany excessive optimism to have a stock market crash like in 2001-2002. One way to have an earnings slowdown would be for the dollar to strengthen. That doesn’t look to be happening soon as Trump’s goal of pushing it lower is being reached in an effort to boost exports in the short-term.