Optimism Prevails Despite Near Recessionary Data 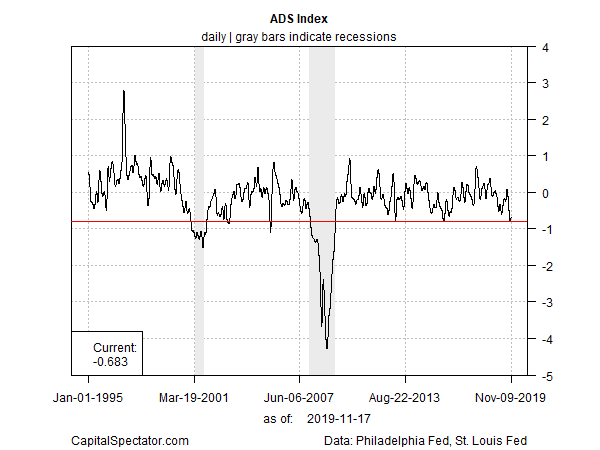 The recent action in markets and the projections from investment banks show there is complacency about the expected economic growth acceleration in 2020. It has become a mainstream thesis as prognosticators have followed the price action. In theory, they are supposed to predict markets, but that’s difficult. Many have played catch-up in the past few weeks driving stocks to new record highs.

As you can see from the chart below, there has been a big decrease in the 21 day moving average of the equity only put to call ratio.

The arrow points to the peak euphoria in this expansion which was in January 2018. As of Friday, the 14 day relative strength of the S&P 500 hit 74.82 which is the highest point of the year. This index has only hit 80 or above twice in the past 10 years. Unsurprisingly, the 10 year peak is in January 2018. The major difference between January 2018 and now is that was the end of the cyclical expansion, while currently we are expected supposedly to be at the beginning of one. 2017 was a global synchronized cyclical expansion, while 2019 was mostly a slowdown.

As we mentioned, investment banks have gotten on board with the price action. Credit Suisse initiated a 2020 S&P 500 target of 3,425 which represents 9.8% upside. The firm expects stocks to rally on multiple expansion and a “reversal of decelerating economics.” That’s a very fancy way of saying increased optimism and growth acceleration. It’s difficult to expect increased optimism following a year where the S&P 500 has risen almost 25%. The firm expects industrial production growth to bottom this quarter.

This thinking explains why stocks ignored the bad October industrial production report. If the consensus is that Q4 is going to be terrible and 2020 is going to show improvement, no one will care about October’s industrial production report. The 3 month moving average of the percentage of manufacturing sectors in contraction is the highest of this expansion. This manufacturing recession is wider, but not as deep as the last one. Credit Suisse recommends buying financials, industrials, materials, and energy; it recommends going underweight staples, utilities, REITs, and communications.

Similarly, Goldman Sachs expects cyclicals to outperform the market because of the economic rebound. This is basically a recount of what has happened rather than a prediction as the S&P 500 is up 8% in the past 3 months and cyclicals are up 12%. The firm recommends CBS, Snap-On, Kohl’s, Urban Outfitters, and TCF Financials among others. One of the principal reasons for optimism is the expectation that rate cuts start to help the economy after 3 quarters. That implies there will be a positive impact in Q2 and Q3 2020.

The ADS business conditions index shows the economy is on the precipice of a recession. As you can see from the chart below, as of November 9th the index was at -0.683. Anything at or below -0.8 is consistent with a recession.

This period of weakness is very close to the troughs seen in the prior 2 weak periods in this expansion. James Picerno filtered this index through a probit model which shows there is a 23% chance of a recession. The peak was above 30% in October. The previous 2 slowdowns had similar peaks.

The good news is the ECRI leading index is improving. In the week of November 8th, the index improved from 145.6 to 146.2 which boosted the growth rate from -0.4% to 0.4%. On the one hand, this index doesn’t signal a further slowdown in 2020. On the other hand, it doesn’t see a major growth acceleration that the optimists see.

On the negative side, the Cass Freight index signaled the slowdown continued in October. The shipments index was down 5.9% yearly and the 2 year growth stack was -0.1%. So much for tough comps driving weak growth. The expenditures index was down 4.1% yearly, while the 2 year growth stack was still 7.4%. Cass Information Systems still predicts negative GDP growth by the end of the year. The latest direction of the Q4 GDP tracking estimates is consistent with this projection.

As you can see from the chart above, the current 4 week average of yearly growth in staffing demand is below the trough in the 2015-2016 slowdown. This is one of the signals that implies this is the worst slowdown of this expansion. The yearly growth in temporary help services in October was -0.2% which is the lowest reading since December 2016 which was the trough of the last slowdown which had growth of -1.2%. Growth went negative 8 months before the last recession and 3 months before the 2001 recession. Prior to the last slowdown, this index had never gone negative without a recession occurring right afterwards or right before. The data starts in 1991.

There is high optimism in the market as evidenced by the 14 day RSI and put to call ratio. Investment banks are following the price action with their predictions for 2020. If the rate cuts help the economy after 3 quarters, there should be improved growth mid-2020. The ADS business activity index narrowly avoided giving off a recession signal in October. The good news is the ECRI leading index hasn’t been predicting a big slowdown in the past 7 months. It’s just not predicting a big expansion in 2020. On the negative side, the Cass Freight index signals the potential for negative growth by the end of the year and temporary staffing demand growth is the worst of this expansion.