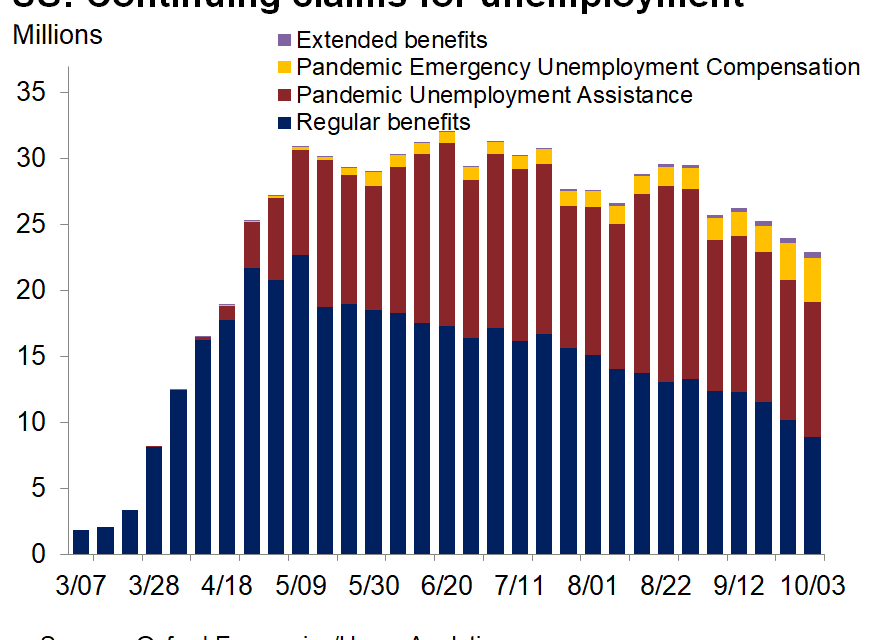 By now, we all know the Fed wants 2% average inflation for the cycle which means it needs to rise above 2% to make up for the past few years of mostly low inflation. It sounds like it’s extremely dovish, but in reality, it’s closer to keeping to its original goal than raising rates the minute inflation rose above 2% ever was. The only reason to raise rates right after inflation gets above 2% is if you think inflation is going to rise out of control. The Fed doesn’t want high single digit inflation. That possibility sounds like a dream right now to them; the Fed doesn’t address such unlikely possibilities.

The chart above demonstrates the Fed’s plan. It’s literally just calculating averages, but it’s still interesting to review. PCE inflation would need to steadily stay just below 3% until the end of 2026 for the long term 2% target to be hit. Even though we expect a dovish Fed, not hiking rates until early 2027 sounds absurd even in this environment. If inflation stays close to 4%, the Fed could hike in early 2024. That would be an unreal scenario. To be clear, inflation will undoubtedly spike next year because of easy comps. None of the inflation spikes in the past expansion occurred on top of tough comps. It has been virtually impossible to get a 4% two year inflation stack. Remember, this chart uses headline inflation, but the Fed focuses more on core inflation which is even harder to get to rise above 2%.

Based on the past couple unemployment claims reports, it seemed like the labor market was taking a step back. Instead we got a strong downward revision and a decline in claims. California’s data started being reported again after a 3 week hiatus. The first week they accepted claims, there was probably a huge backlog. Now that that’s over we can see the numbers. California claims were down 17,000 to 159,000. That’s down 67,000 from before the data was put on hold (226,000 before the hold).

National seasonally adjusted claims were revised down from 898,000 to 843,000. Furthermore, in the week of October 17th, claims fell to 787,000 which was below the consensus of 865,000. This improvement in claims data supports the reflation trade which has mostly been reacting to the stimulus; it doesn’t hurt to have another supportive argument to the thesis.

On a non-seasonally adjusted basis, claims fell from 830,000 to 757,000 which isn’t the recovery low. The low was 2 weeks ago at 731,000. The labor market is improving at a lower rate, but that was expected. It’s amazing the labor market is doing this well with COVID-19 cases spiking in the Midwest. If we get better treatments to lower the death rate, imagine how low claims will fall. As you can see from the chart below, there was a 6% decline in unadjusted claims & PUAs this week; that followed a 5% increase. PUAs were up 8,000 to 345,000 as Florida had a 22,000 spike.

The Labor Market Is Actually Improving

Continued claims fell from 9.397 million to 8.373 million. Claims could fall below the peak in the last recession in 2 weeks if the recent pace continues. The problem is this decline is being driven by people running out of their 26 weeks of benefits. Most of the people who lost their jobs this year did so from March to May. Without the economy fully reopening, we will be faced with a class of disillusioned former workers. This group of workers, mostly in leisure and hospitality, is in trouble.

The good news is the point we made last week about pandemic continuing claims increasing quicker than continued claims are falling no longer is true. In the week of October 3rd, there were 1.22 million fewer continued claims. There were 510,000 more PEUCs and 90,000 more people on extended benefits. As you can see from the chart below, the combination has been falling. The labor market is improving slowly.

This is a bizarre stock market because it is exhibiting late cycle behavior even though the economy is just starting to exit a recession. The best evidence of this being near the end of a bull market is seen in the prevalence of SPACs. As you can see from the chart below, there was a 185% increase in SPACs in Q3 to 77. Gross proceeds from these SPACs was $28.8 billion. There is an onslaught of companies trying to do reverse mergers with private firms. The quality of deals can only fall further. Excess capital is chasing anything that can grow sales, regardless of the sustainability of the business model.

The COVID-19 crisis in the Midwest has escalated as it is causing the national numbers to increase. Hospitalizations have risen over 10,000 since the bottom late this summer (to 41,010). The good news is part of the reason there have been so many cases is the increased prevalence of testing. A higher percentage of people who have the virus, but don’t get symptoms or get mild ones are being tested than in prior months. The chart below shows the proportion of COVID-19 cases in the U.K. that sent people to the hospital has crashed to the high single digits (likely the same trend in America). When you combine that with better treatment at the hospital leading to a lower death rate, you get lower nominal deaths.

The Fed has years to go with zero percent interest rates if it really is going to stick with its plan of allowing the cycle average of inflation to get to 2%. The unemployment claims report was actually good. There was a downward revision, claims fell, and continued claims fell more than pandemic claims rose. The SPAC bubble is still going. It signals we are near the end of the bull market. That could just mean growth stocks are set to underperform. COVID-19 is a major issue in the Midwest. The good news is a lower percentage of cases are putting people in the hospital and fewer people are dying once they go to the hospital because treatment is improving.