Can The Fed Help Turn The Economy Around? 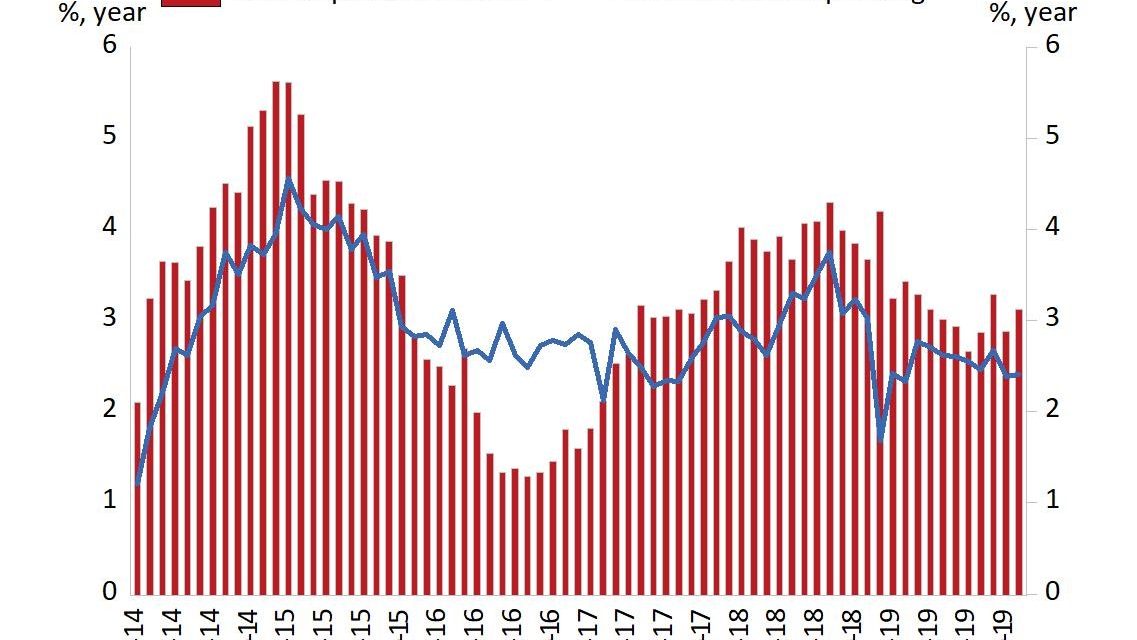 We have already reviewed the leading economic index in a previous article. The chart below brings new context by showing its historical yearly growth rate and the Fed funds rate.

The green boxes show Fed easing helping the economy avoid recessions. The mid-cycle easing in the mid-1990s successfully rekindled growth in the leading index. The box in the late 1990s simply delayed the 2001 recession. The current box is the third one on the right.

We’ve seen 2 prior mid-cycle slowdowns reverse in this expansion without Fed rate cuts to help them, but rates were lower. We think the leading index will turn up with these rate cuts helping because the U.S. Markit PMI and the global PMI are giving early indications the manufacturing sector is turning. The ISM manufacturing new orders index was the biggest drag on this report. The Markit November global manufacturing PMI increased from 49.8 to 50.3 which was a 7 month high. Finally, another reason the leading index’s growth rate should improve is the easing comps. The 11 month growth rate was 0.27% which was 0.18% more than the 1 year growth rate. All things being equal, yearly growth in December should improve.

Q4 GDP growth isn’t expected to be recessionary because the manufacturing sector doesn’t have a huge impact on GDP growth. The consumer is driving the economy. As you can see from the chart below, Q2 and Q3 consumer spending’s contribution to GDP growth was close to 80% of the share of positive drivers.

The final December consumer sentiment index increased 0.1 to 99.3. That’s 2.5 points higher than November’s reading. Current conditions rose from 111.6 to 115.5 and expectations rose from 87.3 to 88.9. It’s very interesting that last year had a slightly higher current conditions index, but December retail sales and PCE growth were terrible. The consumer sentiment index took longer to react to the negative catalysts which were the government shutdown and the crash in stocks.

Unlike the shutdown, consumer spending likely won’t be impacted by the impeachment as just 2% of consumers mentioned it in this survey. It’s interesting that even though production and non-supervisory wage growth is much higher than wage growth for managers, those in the top third income distribution had a 7.5% increase in confidence, versus a 0.8% increase for the bottom 2/3rds. This is likely because of the rapid rise in stocks. There’s nothing like a 28.5% rise in the S&P 500 year to date to get the top third more confident.

The November PCE report was solid when you consider that we already knew retail sales disappointed potentially because of the timing of Thanksgiving. Plus, we’d rather see income growth expanding than spending growth. Spending growth can always catch up when the consumer is confident, but it’s a lot harder to get the labor market on strong footing. It’s interesting to see a confident consumer saving more around the holidays. It doesn’t add up. This supports the narrative that the late Thanksgiving pushed some sales into December.

Specifically, monthly real personal income growth was 0.5% which beat estimates for 0.3%. The October reading was revised up one tick to 0.1%. As you can see from the chart below, yearly real disposable income growth improved from 2.88% to 3.12%.

The 2 year growth stack rose 7 basis points. Overall real personal income growth was a bit stronger as it increased from 3.04% to 3.34% which was the highest growth since February. The 2 year stack was up 6 basis points.

However, yearly real spending growth only increased 3 basis points to 2.41% and the 2 year growth stack fell 17 basis points. The December reading will have a very easy comp which is unlike income growth which will have slightly tougher comps. As you can see, a temporary blip lower in spending that’s not supported by income growth can quickly reverse. A temporary spike in savings can easily be spent in the future. It’s a lot tougher to get income growth back up if people lose their jobs.

The personal savings rate last December rose from 7.2% to 8.8%. Unless consumers were fearful of a cyclical change that came into fruition, this spike was obviously going to reverse. You could tell the situation was temporary because government shutdowns always end and stocks tend to rally after they get extremely oversold. Obviously, we also had the help of the Fed which reversed course quickly after hiking rates in December. In this November report, the savings rate increased 0.1% to 7.9% which is relatively high compared to the past 20 years of data. You’d think with no government shutdown, a rising stock market, and an easing Fed you wouldn’t see a rising savings rate in a holiday shopping month. It could have increased because of the Thanksgiving shift. We will see in the December retail sales report which comes out on January 16th.

The Fed is nowhere near hiking rates. This suppresses the short end of the curve and steepens the curve when the long yield increases. Recently, long yields have increased mainly because of higher inflation expectations which is mainly related to oil prices. The 10 year breakeven inflation rate went from 1.6% on November 20th to 1.77% on December 20th. Inflation has been low this cycle, but core inflation could increase closer to 2% (temporarily above it even) next year because of easier comps (March & May) and the potential cyclical upturn.

The Fed cut rates in hopes it can turn the economy around. Rate cuts don’t always prevent recessions, but they can help the economy turnaround if it’s just a slowdown. The current slowdown is similar to the previous ones in that it’s driven by manufacturing which is cyclical and bounces back quickly. The ECRI coincident index saw its growth rate stop falling in November as it stayed at 1.8%. In 2016 the rate troughed at 0.9%. Real income growth was solid in November, but spending growth wasn’t great. We should see an increase in consumption growth in December because of the late Thanksgiving and easy comp. Core inflation is nowhere near causing the Fed to hike rates soon. That’s why the Fed fund futures market shows there is a 1.9% chance of a hike in 2020.