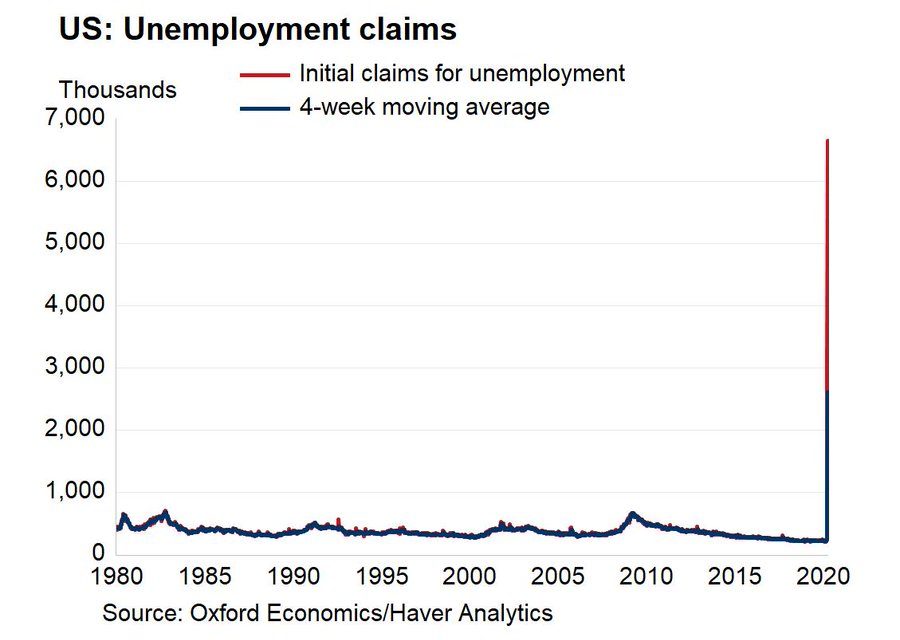 The March Challenger job cut announcements report is supposed to be a leading indicator for the labor market since announcements occur before actions. The report showed there were 222,288 new job cut announcements which was up from February’s 56,660. That’s the highest monthly total since January 2009 which had 241,749 cuts. March had a 267% yearly increase. This report doesn’t include the hundreds of thousands of workers who were furloughed. In Q1, there were 346,863 cuts which was up 82% from last year and the highest quarterly total since Q1 2009.

The pandemic caused 141,844 of the cuts in March. The hardest hit industry was entertainment/leisure which had 83,234 cuts as you can see from the table below. Autos had 11,991 cuts and services had 8,430. Services might see more weakness in April because the sector involves human to human contact.

Once again, we saw stocks rally on the same day a record jobless claims report came out. This signals the weakness is priced in. You can argue it’s good news claims were up because it means people are getting the help from the government they need. We already know demand for unemployment insurance is up; it’s just a matter if people are getting the money. With the extra $600 the federal government is adding to state aid, some are seeing a pay increase. In New York state, from March 23rd to March 28th, there was a 10-fold increase in website visits to 35 million on the Department of Labor’s site. There was a 161-fold increase in phone calls to 8.2 million to the NYS Department of Labor (people likely called multiple times).

Specifically, claims in the week of March 21st were revised from 3.283 million to 3.307 million. In the week of March 28th, there were 6.648 million claims which beat estimates for 3.35 million. The highest estimate was 6.5 million. As you can see from the chart above, there have been about 10 million claims in 2 weeks. The economy only lost 8.6 million jobs in the entire 2008 financial crisis. In February, there were 5.787 million people unemployed people and the rate as was 3.5%. That number increased 9.955 million in the past 2 weeks which is a 172% jump. If the unemployment rate increases by 172%, it will be at 9.5%. The peak last recession was 10% and the peak since the Great Depression was 10.8% in 1982. It’s notable that the size of the labor force and participation rate won’t stay the same from February (latest data as of the writing of this article) to April. The April report will have a higher than 9.5% unemployment rate because we still have 2 more weeks of data that will go into that report.

What Can The Fed Do?

The next Fed meeting is April 29th, but the typical Fed schedule has been thrown out the window because the Fed has made intra-meeting decisions in response to the volatility and lack of liquidity caused by the panic related to COVID-19. All eyes are squarely on the COVID-19 data in terms of testing and new cases because the Fed has done its job so far but may have to do more if the dollar continues to rise. The market has calmed down, credit is available, and the muni-bond market has gotten closer to normal.

The fact that the maligned Carnival Corp was able to raise money, shows financing is available. The firm sold $4 billion in secured bonds which was above the $3 billion targeted. The coupon was cut from 12.5% to 11.5%. That’s very high for a BBB rated firm, but it’s to be expected because the company can’t earn money. This debt offering leads to the obvious question. If the cruise companies can raise money, why can’t other firms do so without getting help from the government? The answer is free money will always be taken if offered.

If markets get into trouble, the slide below shows you what the Fed can do to solve the problem. Remember, the Fed never runs out of tools. Buying corporate debt wasn’t thought to be a probable outcome before a few weeks ago.

The labor market is in terrible shape. This was a 2 week spike in initial claims for the ages. It makes every other increase look tiny. In March there was a spike in job cut announcements. There will be even more in April. The Fed has done its job, but has other tools if need be.