Will The Housing Market Strength Last? 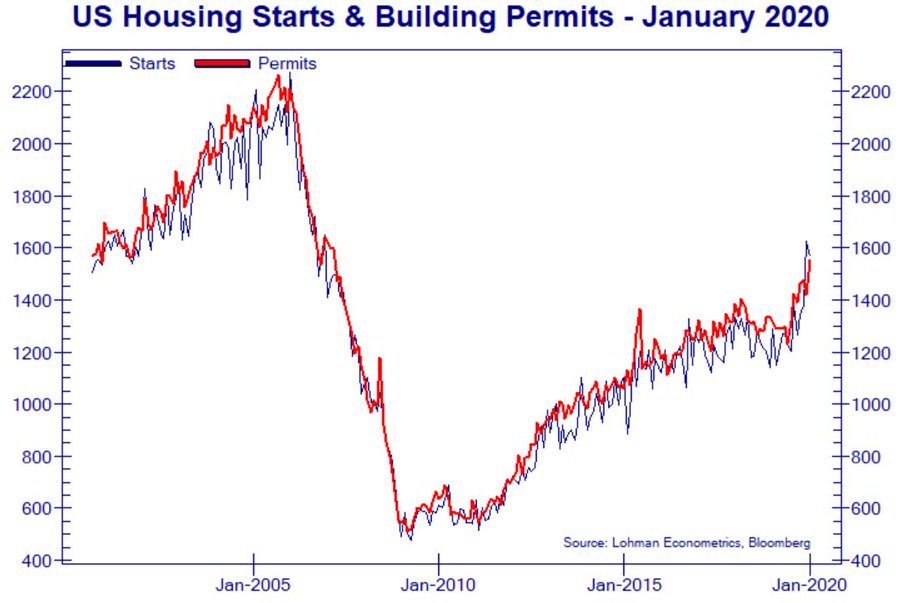 The February housing market index fell from 75 to 74 in February which is still a very strong reading as the index is now 2 points off its expansion high. The housing market is quickly becoming one of the hottest areas of the economy. Homebuilders were helped by the warm weather in December and January, while buyers love the low mortgage rates.

In the week of February 14th, the MBA composite applications index fell 6.4% weekly after it rose 1.1% in the week before. The purchase index fell 3% weekly after falling 6%. However, yearly growth was 10% as the housing market looks strong heading into the spring buying season. The refinance index fell 8% weekly after rising 5%. With the recent decline in rates refinancing has increased in the past few months. This is great for consumers because they lock in lower mortgage payments for the life of the loan.

The housing market was helped by warm weather in January, just like the prior month. Starts fell slightly, which was much less than they were expected to fall, while permits exploded higher. Last month, permits indicated starts were about to come in. Now that’s not the case, although, we’d still advise caution because the warm weather was a one-time benefit that happened to occur twice in a row.

December housing starts were revised higher from 1.608 million to 1.626 million. In January they were 1.567 million which was down from last month, but beat estimates for 1.42 million. The highest estimate was beaten as it was 1.48 million. No one thought starts could stay that high, but then we had a warm January. Q1 GDP growth will be helped by residential investment. Even if starts stay strong, that won’t move the needle nearly as much as consumption though.

Even though overall starts fell, multifamily starts were up from 531,000 to 547,000 which was the highest total since July 1986. Millennials are moving into apartments in cities. There were 522,000 multifamily building permits which was the most since June 2015. That’s the 2nd highest reading of this expansion. The table below shows the details on the results. As you can see, multifamily growth was strong and growth was great in all geographic regions. To be clear, the South is the biggest region by far. It’s followed by the West, then the Midwest, and then the Northeast.

The best way to summarize the January Fed Minutes is that the Fed is giving no indication that it will change rates in the next couple meetings. The Minutes said, the “current stance of monetary policy was appropriate.” That’s despite the market pricing in 1-2 rate cuts in the next year as the chart below shows.

The Fed stated, keeping rates the same “would give the Committee time for a fuller assessment of the ongoing effects on economic activity of last year’s shift to a more accommodative policy stance and would also allow policymakers to accumulate further information bearing on the economic outlook.” The Fed has a few more months to asses the impact of last year’s cuts if it takes a full year for a rate change to impact the economy like it thinks.

The Fed also discussed various ways it can set an inflation range it would be okay with rather than just having a 2% target. It will unveil its decision in mid-2020. Such ranges make sense because as it looks now, the Fed is consistently missing its target based on core PCE. The Fed keeps saying it would be okay with above 2% inflation, but it keeps coming in below its target. That’s very odd positioning. Why say you’re okay with the exact opposite side inflation has been on for years?

There were 3 options the Fed discussed. The first was an uncertainty range which would tell markets how wide inflation could vary and still be consistent with its target. The 2nd was an indifference range which emphasized an inflation range policy wouldn’t need to respond to if it stays within it. The third was an operational range which could be used when the Fed wants to favor one side. Whichever the Fed chooses will be a new approach to monetary policy.

The Fed appeared to be living in the past when it mentioned that “keeping policy rates low to achieve both of the Committee’s dual-mandate objectives may contribute to a buildup of financial vulnerabilities, especially at times when the economy is at or above full employment.” We say this because the low unemployment rate and accommodative monetary policy hasn’t led to a big spike in household leverage as consumers deleveraged after the financial crisis.

The housing market is doing well according to the housing market index, consumer sentiment on housing, the MBA applications index, and housing starts & permits. The Fed doesn’t plan on hiking or cutting rates anytime soon. Based on recent inflation data, it appears core PCE inflation will rise to 1.8% in January which isn’t enough to move monetary policy. The Fed will update its inflation target by coming out with a new range in the middle of this year. The Fed is wrongly concerned about full employment causing a buildup of financial vulnerabilities.