Will The Economy Recover Quickly? 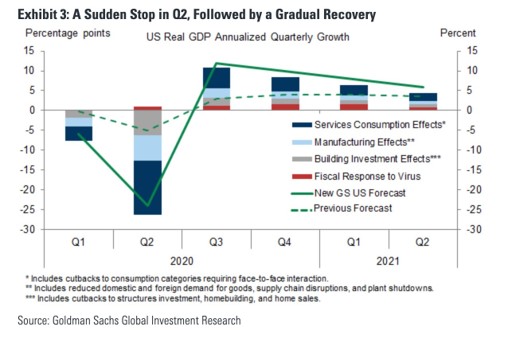 Small businesses drive the American economy as about 47% of people are employed by them and they represent 45% of GDP. Small firms make the economy dynamic and give people the opportunity to climb up the economic ladder. They inspire people and create community. They are now on the brink of disaster because of the economic shutdown due to COVID-19.

As you can see from the chart above, 21% of small businesses would survive less than 1 month if sales stopped completely. If this is accurate, nearly 21% of small businesses are about to fail. Grocery chains and other essential services will do okay, but the others are in dire straits. Another 34% of small firms will be in trouble if this shutdown lasts 3 months. Let’s stick with the first segment though. One thesis put out by investment banks is this will be a quick slowdown that is followed by a sharp recovery. If 21% of small firms fail, it won’t be a quick recovery.

This recession is much worse than a normal one because business is being completely shuttered. It’s not as if business is down 20-40% because there are job losses and the economy is weak. This time businesses can’t open. That’s why businesses will fail much quicker than they usually do in recessions. Some firms might decide to shut down because of the uncertainty. They might not want to take the risk that the economy won’t open for an undefined period of time. People are scared. They might want to use the money hemorrhaged by their small business to spend on their family’s necessities. It sounds hard to give up on a business that has been going for years just because of a short term disruption, but no one even thought such a shutdown was possible a few months ago. The level of uncertainty has been amplified to unprecedented levels.

Restaurants Are In Dire Straits

This economic shutdown will last longer than 13 days. These firms are in deep trouble. The median is 27 days of cash reserves which might be around how long this shutdown lasts if we are lucky.

Restaurants are in disaster mode. They only have 16 days of cash reserves. According to Open Table on March 19th, restaurant bookings were down 98%. It’s tough to plan for a 98% decline in bookings. It’s impossible when you didn’t see it coming a few weeks prior. Small restaurants employed almost 7 million people in 2013. Small retailers employed almost 5.5 million. Retail is in a similar cash position as these firms have 19 days of cash. These firms are losing out to Wal-Mart and Amazon as Wal-Mart stock just hit a 52-week high and Amazon just hired 100,000 workers. Many analysts think Amazon will keep most of the market share it gains in this recession. If you’re curious how much of a bailout small firms need, the median average daily cash balance of small firms is $12,100 and it’s $16,000 for restaurants. Small firms in New York have 28 day cash buffers. New York state just shut down all non-essential services.

Goldman Sachs did a survey on how small firms are coping with COVID-19. 51% said their business will only be able to continue operating for 0-3 months. 75% of these 1,500+ small firms said COVID-19 caused them to have fewer sales. Only 13% are confident about their contingency plan to meet their business’ needs. Small firms don’t plan to be shut down.

The Most Negative Prediction On Wall Street

Estimates for 2020 economic growth are widespread and keep changing because negative news keeps coming out and because investment banks are very uncertain about the future. The estimates for Q2 quarter over quarter annualized GDP growth range from -12% to -24%. Goldman Sachs has the most negative estimates on Wall Street. (UPDATE: Morgan Stanley is predicting -30.1% Q2 GDP growth & 12.8% unemployment).

Goldman sees growth being the worst in April at -10%. If investors thought growth would improve in May, they’d probably be buying stocks. The fact that they are selling them shows how uncertain this prediction is.

Goldman Sachs sees 2020 S&P 500 EPS coming in at $110. In our most viral tweet of the year, we stated that the S&P 500 could fall 28% to 1,650 if the S&P 500 had a 15 PE on $110 in earnings. Some replied that investors would throw out this period’s results. That’s fair, but recognize that the decline in earnings will push stocks lower because buybacks are being pulled back, dividends are being cut, and shares will be issued. McDonald’s recently suspended its $15 billion buyback and Boeing cut its dividend. The goal of this insight is to come up with what we view could be a reasonable worst case scenario for stocks.

Small businesses are facing an apocalypse. You might be surprised to find out that being shut down for just a few weeks is enough to put thousands of small firms out of business. If 21% of small firms go bust and they represent 45% of the economy, that’s wiping away 9.45% of the economy in a few weeks. They won’t come back soon. It’s not easy to have your small business fail. It will be tougher to compete with Amazon and Wal-Mart after the impact of COVID-19 is over (compared to before it shut down the economy). The economy will recover after the shutdown ends, but it might become less dynamic in the long term. Many of these small firms won’t come back.