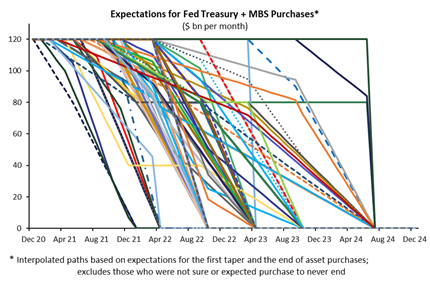 The Fed’s plans for low rates and QE will be questioned by the market once the vaccine goes out and the labor market recovers. Even though the unemployment rate has become more normal, there are millions of displaced workers in the COVID-19 economy. When those people get jobs again, the market will immediately look to the Fed to make plans to end its QE program and provide updated guidance on when it will raise rates for the first time. The market determines Fed policy more than some think. The Fed is only allowed to raise rates when the market says it can. The best way the Fed combats this is though forward guidance. It wouldn’t have a chance versus the market if it only set policy though actions.

As you can see from the chart above, there are varying views on how QE will be unwound. The Fed won’t give guidance on ending QE and raising rates in the near term until the pandemic is over. The Fed looks at actual economic data. Much like oil prices, actual economic performance can’t jump ahead of reality. In other words, oil prices can’t spike until demand actually comes from an improving economy next year.

Hotels and restaurants can’t go on a major hiring spree until demand comes back. The Fed can’t even talk about ending its recessionary policies until the economy regains its form. 62% of small businesses stated in early November that the worst is yet to come with COVID-19’s economic impact. Markets love to price in the future when uncertainty wanes. If investors knew a vaccine would come by early 2021 back in March 2020, there wouldn’t have been as big of a crash.

Despite the recession and the pandemic killing 300,000 Americans, this has been a good year for stocks. In fact, the S&P 500 has had the most days where it has gained 1% or more this year (64 times) since at least 1950. None of the tech bubble years had this many solid winning days. That’s in part because of help from the Fed. The other bullish aspects are the understanding that this virus will pass and that growth software names have done well in this environment. The composition of the index is critical. If we had a recession that only benefited energy stocks, the index would crash.

We are in a unique period where Main Street is still getting hurt while Wall Street flourishes. In fact, just 40% of small business owners said their business can operate indefinitely in this environment. On the other side, the chart above shows financial conditions are near the loosest ever. Speculation among retail investors is sky high as they treat the stock market like a casino. If the Fed were to raise rates and end QE, there would be a big hit to the stock market and a modest hit to Main Street.

The Fed works with the tools it has. It’s up to fiscal policy to fill in the major gaps. This week the government will pass a spending bill that includes $900 billion in COVID-19 relief that includes 16 weeks of $300 in unemployment benefits and $600 to $700 checks. Someone on financial Twitter mentioned a stimulus could cause the Fed to pull back on easy monetary policy. That is very wrong because the Fed knows this is a small stimulus. If the vaccine rollout goes wrong, there will be a problem, so it’s best to stay with current policy until the virus is gone. The Fed has no wiggle room to get more hawkish now.

The November industrial production report was good especially after you adjust for the weakness in utilities which was caused by warmer weather. Monthly industrial production growth was 0.4% which beat estimates by a tenth. However, October’s growth fell from 1.1% to 0.9%. Yearly growth fell from -5% to -5.5%. The comparisons will get much easier starting in March. The capacity to utilization rate rose from 73% to 73.3% which is a cycle high. There is still plenty of room for it to rise (to the high 70s at least).

Manufacturing growth was 0.8% monthly which doubled estimates. Furthermore, last month’s growth rate was revised up by 0.1% to 1.1%. Yearly growth fell from -3.3% to -3.5%. Motor vehicles production was up 5.3% monthly. Primary metals, computers/electronics, and aerospace were all up. Mining production was up 2.3% and utilities were down 4.3%.

As you can see from the chart above, the manufacturing diffusion index shows 66% of manufacturing industries are in decline. The 3 month average is 69% in decline; this means this month was better than the past two. This month had a broader based recovery above the flatline. This is how all post-recessionary manufacturing recoveries look. 2021 will be a good year for manufacturing and the cyclical stocks. By 2022, we might already be looking for a slowdown. That’s how quick these cycles are. We had multiple manufacturing recessions in the last expansion.

The market is getting with the program when it comes to a cyclical recovery which generates inflation. As you can see from the chart below, inflation was rated as the 2nd biggest tail risk. The Fed has no problem keeping rates at zero in all of 2021, but by the end of the year questions will mount on how it will deal with inflation if the vaccine rollout is successful. The poll has fiscal policy drag as a risk, but there will be another stimulus passed this week (survey respondents didn’t know this at the time). Future action will depend on the Georgia Senate races which are tossups.

The Fed is managing the fact that Wall Street and Main Street are in different stratospheres. Fiscal policy support is coming, but of course the best way to heal Main Street is for the vaccine to be distributed quickly. Financial conditions are about as easy as they have ever been, but the Fed isn’t going to hike rates in 2021. Manufacturing growth in the industrial production report was quite good. We will see more cyclical manufacturing strength in 1H 2021. Inflation was rated as the biggest tail risk by the 2nd most fund managers in the December survey.