Why Jobless Claims Are Still So High 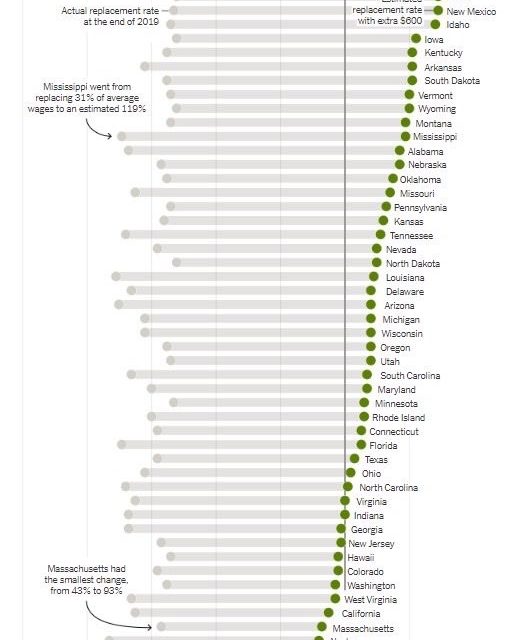 We received some criticism for saying initial jobless claims had peaked in late March. Now that’s virtually assured as they fell for the 5th week in a row. In the week of May 2nd, initial claims fell from 3.846 million to 3.169 million. This is all about the situation getting worse at a lower rate. The labor market is still worsening, but it’s not worsening at as quick of a rate as it was in late March. Furthermore, as we will get to later, many of these claims are from the backlog, meaning these aren’t newly unemployed people. As you can see from the chart below, initial claims are expected to fall to 2.48 million in the next report.  It also shows continued claims rose from 18.011 million to 22.647 million. They are expected to rise to 28.979 million in 2 weeks. When continued claims peak, it means the recession is near its end or ended. We aren’t at that point yet.

To be clear, prior to this recession, the record high in initial claims in a week was 695,000. Even with claims falling for 5 straight weeks, they are still more than 4 times the previous record. Obviously, claims are still high because the economy is in dire straits. Most states haven’t reopened yet and the ones that have reopened aren’t operating like normal. There are 2 other reason claims are so high. The first is there was a huge backlog in claims created when the economy fell into a recession in March. The systems were overwhelmed. It’s not surprising state government’s websites couldn’t handle this many applications because there hadn’t been a recession in 11 years (websites not updated) and nothing like this could have been expected. It took 3 years for the unemployment rate to reach its high in the Great Depression. This peak, which will be higher than the Great Depression peak, will be reached in a few months.

Backlog Being Worked Through

The chart below shows unemployment claims as a percentage of the labor force by state. We don’t know exactly which claims were new and which were from backlogs, but we can get an idea from this data.

For example, Florida had problems with its website. The labor market in the past 2 weeks likely wasn’t worse than it was in March. It just took time to process all the claims. Georgia, which just opened its economy, processed the most claims as a percentage of its labor force, putting it in the lead for this recession. Both Georgia and Michigan shockingly have over 25% of their labor force receiving benefits.

It’s good news that the backlogs are finally being worked through, but it’s bad news it took this long. People without savings heading into this recession probably faced severe woes without any benefits for a month or two. Washington has a backlog of 265,000 claims which it will get through by June. That’s a tragedy because this state was one of the first to deal with the COVID-19 crisis. 57,000 of those backlogs are in adjudication where there is a discrepancy in the application. It usually takes 21 days for that to get fixed, but it has taken several weeks in this case.

The governor of Illinois claimed the state doesn’t have a backlog, but reports show it has a 12,000 backlog. There is a story of someone who called at 7:30 AM being forced to wait until 5 PM to get through. The system is still overwhelmed. The governor of New Jersey said the state would get though the backlog of gig workers by next week. Keep in mind that as the number of claims in backlogs falls, the number of states reopening will increase. That’s a double effect that will work to lower initial claims. That might be why Pantheon Macro is predicting jobless claims per week falling below 1 million in June. Almost all of the rise in the unemployment rate will have taken place by the May BLS report which is next month’s report.

Getting Paid Not To Work

Initial claims are also still high because many people are getting paid more not to work than to work. If the economy was fine and the government said people making $60,000 or less would get paid more if they didn’t work, initial claims would spike. People are incentivized not to work. This wasn’t the case in the last recession; benefits were instead extended to 99 weeks. This situation is interesting because the government is probably willing to extend benefits. However, you can’t judge the need for an extension by the number of people unemployed, if people are being incentivized not to look for a job. That government decision should probably be based on the COVID-19 situation. To be fair, many people don’t want to stay unemployed because they know the benefits will run out eventually and if they chose to stay unemployed, someone might take their old job.

The chart below shows workers in more than half the states on average will receive more benefits than they get in their normal paycheck. 9 states have people making at least 20% more via unemployment benefits than they would be working. There’s a mistaken political narrative that workers aren’t being helped. The backlog is a problem, but the policy certainly is good.

This will probably be the fastest decline in continued claims ever because it was an exogenous event. The biggest quarterly average decline ever was 700,000 per week. If that speed occurred in the coming expansion, it would take 7.5 years for a recovery. That doesn’t sound bad, but recognize that the way declines occur, the fastest part is the beginning of the expansion. That means if we saw a similar average cycle decline, it would take decades for the labor market to normalize. The peak decline in continued claims will be the largest ever by orders of magnitude.

Initial jobless claims have fallen for 5 straight weeks, but they are still the highest ever outside of this recession. They are high because the economy is weak, there is a huge backlog still being worked through, and because people are incentivized not to work. The government is going to need to end this help when the labor market still looks weak because it will never look strong when people are getting paid more not to work than to work. The coming decline in continued claims, which will mark the end of the recession, is about to be the most severe ever. It needs to be or else this recovery will take decades.