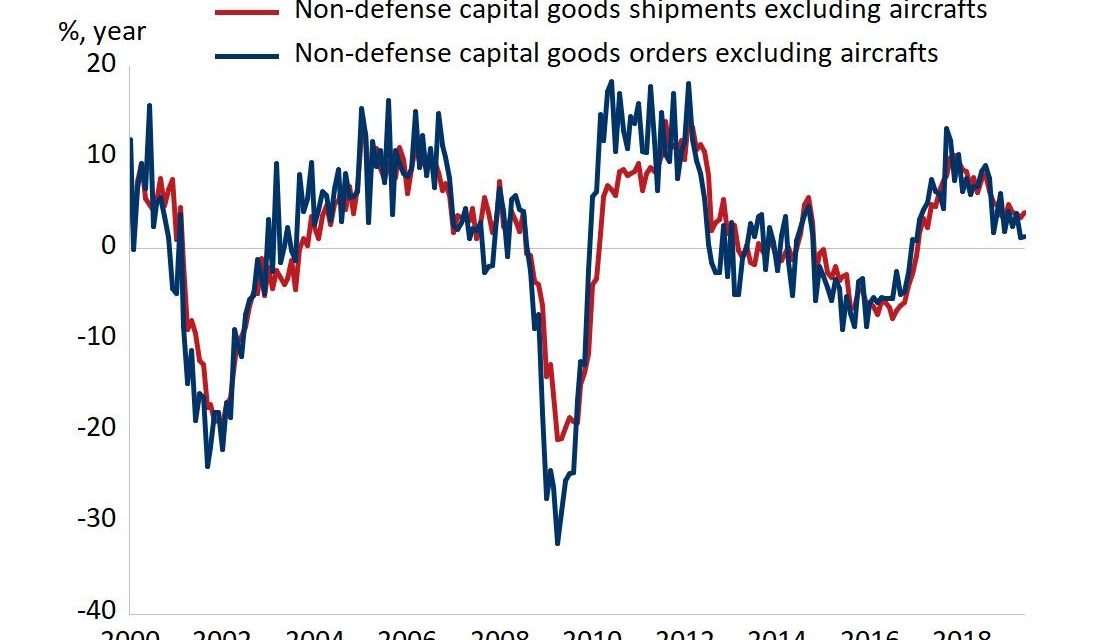 With the disappointing new home sales report we discussed in a previous article and the disappointing headline durable goods orders reading we will discuss in this article, the U.S. economy has seen a continuation of economic reports not meeting estimates. As you can see from the chart below, the U.S. economic surprise index is at -68.1 which is near the low for the year.

It’s not close to the big decline in 2011, but it’s far from good. To be clear, missing estimates doesn’t directly equate to weakness because estimates can be high. However, in this case most economists know the economy is in a slowdown, but results still aren’t matching estimates.

After the latest economic results, the Atlanta Fed GDP Nowcast lowered its Q2 GDP growth guess from 2% to 1.9%. Goldman Sachs raised its estimate from 1.4% to 1.5%. Finally, Bank of America lowered its estimate by 0.6% to 1.9%. It seems likely growth will fall from Q1’s rate, but if inventories and trade don’t help the headline reading, Q2 could have stronger underlying results than Q1. As much desire some have to call for a recession after avoiding one for 10 years, the Q2 advanced GDP report probably won’t signal the economy was in a recession. The economy has successfully outlasted the 1990s expansion.

The chart below does a great job of showing you how the economy can be in a slowdown without a recession.

Results aren’t even as bad as they were in the 2015-2016 slowdown. However, they are headed in the wrong direction which is an issue especially if there isn’t a trade deal soon. Monthly May durable goods orders, which were hurt by aircraft orders, were down 1.3% which missed estimates for a 0.1% decline. The April decline was revised from 2.1% to 2.8%, making matters worse. Yearly growth fell from -0.7% to -2.8%.

The monthly results ex-aircraft orders look better, but that’s partially because of weak comps. Monthly ex-transportation growth was 0.3% which beat estimates for 0.1% and the April decline of 0.1%. Core capital goods orders were up 0.4% monthly which doubled estimates and was on top of the 1% decline in April. As the chart above shows, non-defense ex-aircraft durable goods orders growth was just 1.3% yearly; that’s up from 1.2% in April. Yearly core shipments growth was solid as it was 4% as you can see from the chart below.

Since overall inventories rose 0.5% and overall shipments rose 0.4% the inventory to shipments ratio stayed at a favorable 1.67. Further good news is motor vehicles and parts orders increased 0.6% monthly. Year to date they are up 7.5%.

Economists usually focus the most on core orders because aircraft orders can be volatile. If you focus on those, then this report shows the slowdown is still in play, but didn’t get significantly worse. Nothing dropped off a cliff except aircraft orders which will likely rebound shortly. Keep in mind that durable goods orders is a leading indicator and doesn’t directly affect GDP growth. These are just orders, not actual production. However, they signal where production is headed.

As you can see from the chart below, the net percentage of fund managers taking out protection from a stock market decline in the next 3 months is higher than it was in 2008.

Sometimes when everyone sees a negative catalyst and prepares for it, the results aren’t as devastating as they were feared. Black swan events cause trouble because they are unforeseen by most investors. This skittishness among fund managers could be seen as a good sign for stocks because it means there are plenty of bears who can turn into bulls, driving stocks higher when they buy them.

This survey is all part of the very negative results seen from fund managers in June. The trade war was seen as the biggest tail risk which means that’s why many of these managers took out protection against a decline in the next 3 months. It has already been over a week since this survey came out and nothing terrible has happened yet. In this survey, long treasuries was the most crowded trade for the first time ever. There has been euphoria amongst treasury bond investors as the economy’s slowdown continues.

Once the G-20 summit ends, investors’ attention will shift to what the Fed will do on July 31st and the start of Q2 earnings season. As you can see from the table below, the early results are looking good. With the first 14 firms reporting Q2 results, 13 beat EPS estimates. The average beat was 6.37% and the average growth rate was 5.14%. That’s better than last quarter at this time when growth was only 3.53% from these same firms. We are seeing growth acceleration. Sales growth hasn’t been as strong as 71% of firms have beaten results on growth of 2.65% which is below the 4.64% growth rate in Q1. Q2 sales have only beaten estimates by 1.22%.

Many economic reports are missing estimates, but Q2 GDP growth is still expected to be about 2% which is far from a recession. The durable goods headline reading was hurt by aircraft orders. If you ignore them, growth was weak, but that’s nothing new. The slowdown is intact, but it’s not transitioning into a recession. Fund managers were very bearish in June as they bought protection against a decline within 3 months, thought the trade war was the biggest tail risk, and thought long treasuries was the most overcrowded trade. So far, EPS estimates have been beaten solidly in Q2 earnings season. More earnings results will come out in the next few weeks.