Who Bears The Brunt Of This Recession? 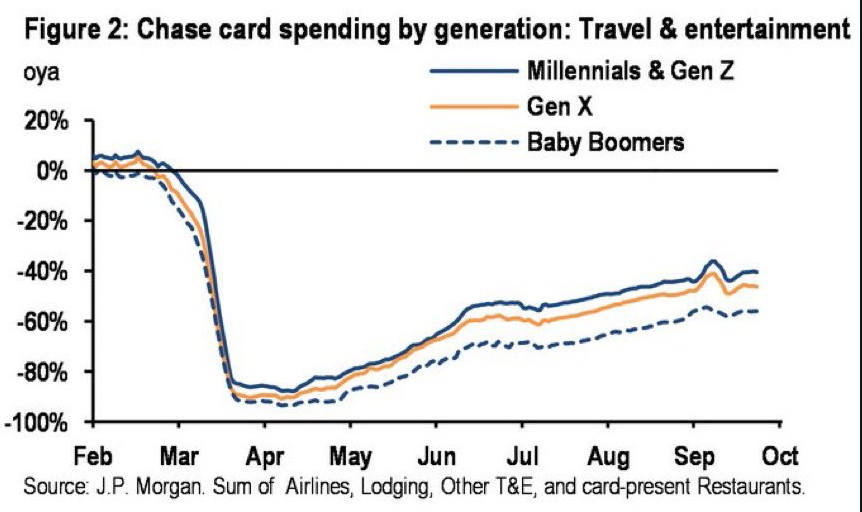 Redbook same store sales growth fell one tenth to 2.1% in the week of October 3rd. Growth is still low. It’s better than where it was at the worst of the recession and late in the summer, but that’s not saying much. Deloitte is projecting November to January sales growth will be just 1% to 1.5%. That growth is coming from online sales which are projected to rise 30%. ShopperTrek expects retail traffic in stores to fall 22% to 25%. That because of the virus. It’s irresponsible to gather in large crowds. This is bad for Black Friday which should have a lower percentage of holiday sales compared to most years.

Cyber Monday will be the key date to watch. The holiday shopping season isn’t long, but the timeline will be interesting. On the one hand, the virus could get worse as people gather indoors in the late fall and early winter because of colder weather. On the other hand, the virus could become less deadly with better treatments. There are supposed to be 150 million tests by the end of the year which could limit the spread. The world is undoubtedly heading into this winter with more fire power to treat and limit COVID-19 as compared to 10 months ago.

The younger a person is, the less likely they are to lower their spending on travel and entertainment. That makes sense because younger people are less at risk to dying from the virus. There is over a 10 point spread between the decline in spending on travel and entertainment by millennials/gen z versus boomers. Both are still down over 40% though. We don’t want to minimize the pain industries are going through.

The chart above shows this in more depth. As you can see, movie theaters are barely seeing any spending at all, while specialty food and beverage sales are up over 50%. Movie theaters are in trouble because production companies aren’t releasing new films since theaters aren’t being opened in the big markets: California and New York. It makes more sense to delay the release of these movies until 2021 when all the theaters are open.

It would benefit the theaters greatly if we knew exactly when it will be safe because they have already delayed reopening a few times. Many independent theaters are only a few weeks away from bankruptcy. The key is to avoid the big companies from getting into trouble as it would lead to more permanent job losses. The industry is in modest secular decline because of streaming, but there would have been many years left for these jobs if it wasn’t for this virus.

In August job openings were 6.493 million which was down from 6.697 million and beat estimates for 6.25 million. It’s not the best for openings to fall. This was the first decline since the recovery started. However, recognize that this stat almost fully recovered prior to this decline as there were 7.004 million openings in February. In contrast, it took about 5 years for openings to recover after the last recession. Hires were very volatile in this recession and recovery as the chart below shows. Hires in May were already above that of February.

In this report, hires increased very slightly to 5.919 million which is slightly higher than where they were before the recession. This was the quickest labor market recovery ever. The leisure and hospitality industry had a wild ride this year as hires were 1.091 million in February, 490,000 in April, 1.759 million in June, and now they are 955,000 in August. With all the jobs that were lost, we need to see more hirings than there were in August. The September JOLTS report might be better as the industry had less weakness than normal for that time of year according to the BLS report.

It’s very obvious we need to see widespread adoption of a vaccine, better treatments, and better testing before this industry gets back to normal. The good news is the chief scientific advisor for Operation Warp Speed in the Trump Administration stated there will be 1 or 2 vaccines in a month or two (November to December) which can be given to 30 million people.

There is confidence in vaccines coming very soon. Furthermore, in France the 7 day average of new cases as of September 15th was 8,512, yet the current 7 day average of new deaths is only 68. We used a 3 week delay to compare the 2 data points because it takes a few weeks to die after contracting the virus. As you can tell, the death rate has fallen sharply from where it was in March/April. The key is to get the American death rate down as its 7 day average is still 719.

Married women lost 949,000 jobs in September, while single men gained 1.2 million jobs. That’s because of the school delay. The good news is many schools have since reopened. Of course, many kids are going to school online, so many moms still need to stay home with their kids. This is yet another example of where getting more testing, vaccines, and better treatments will allow the economy to go back to normal. Just because the unemployment rate has fallen to 7.9% and the stock market is near its record high, doesn’t mean we are close to normalcy.

The consumer is doing okay, but there isn’t robust enough spending to inspire high estimates for this holiday shopping season. Trump suggested there won’t be a stimulus until after the election. The good news is better treatments, testing, and vaccines are coming soon. The bad news is independent movie theaters are about to go bankrupt. We need COVID-19 to be handled before the leisure and hospitality industry and married women can get back to normal. We’ve already seen the death rate kept low in France even though it has more new cases than the outbreak in the spring (because of more testing). The number of new deaths has fallen to 719 in America which is too high for the economy to get back to normal.