What The August BLS Headline Miss Didn’t Tell You 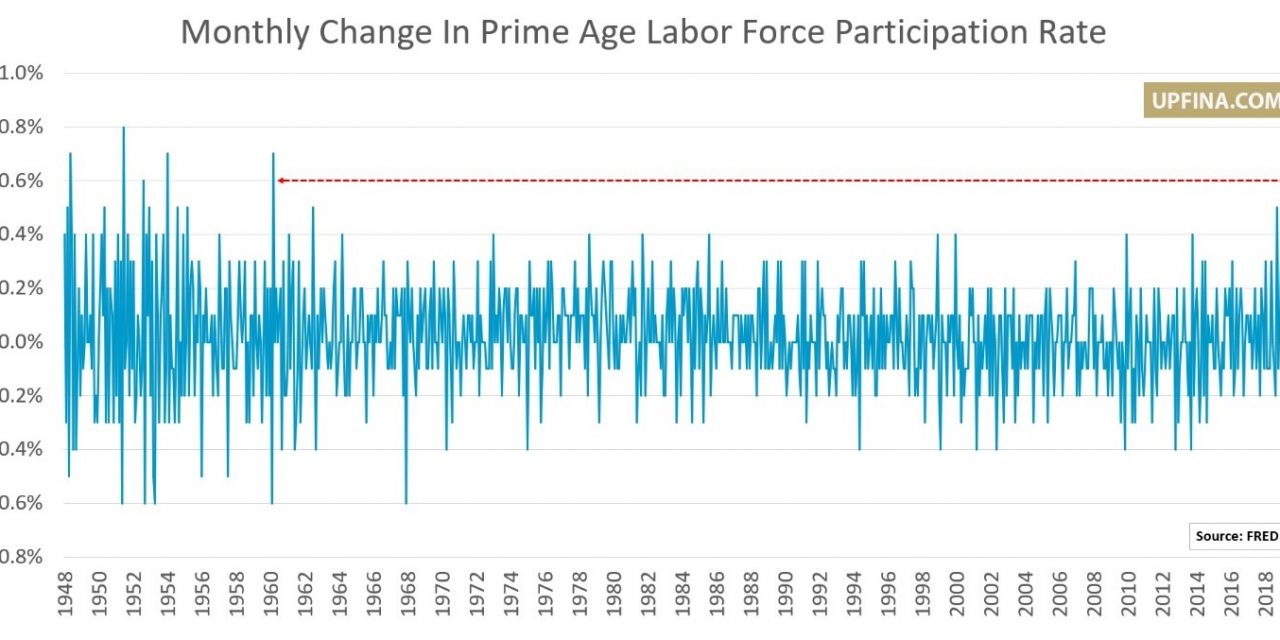 Since the labor market is nearly full, a wide swath of workers is seeing solid wage growth. With headline inflation low, real wage growth continues to be positive. Many bearish investors point out the low single digit real wage growth, but it’s solid relative to the past few decades of data. Just because it doesn’t seem high, doesn’t mean it isn’t a positive now.

The worst part of this report was private sector job creation. There were only 96,000 private sector jobs added which missed estimates for 150,000 and was widely below the ADP reading of 195,000 jobs created. The market reacts to the BLS results.

As you can see form the chart below, 34,000 jobs were created by the government.

You know there is a problem when the government is creating the second most number of jobs. The government created so many jobs primarily because of the census as there were 25,000 temporary federal workers hired. There won’t be as many census workers hired for this census compared to previous ones because of the advances in technology and because the labor market is nearly full. Because satellite imagery was used to verify 65% of addresses, the Census Bureau is hiring 40,000 workers instead of the 150,000 they hired in 2010 for this task. It’s also difficult to find workers. Census job creation will be the strongest in April and May of 2020. If there is a recession next year, this will provide a mini temporary stimulus to the labor market.

The overall labor force participation rate increased from 63% to 63.2% which is a big deal because the rate rarely increases due to demographics. Expectations were for 62.9%. Just to give you an idea of the size of this increase, in the past 10 years, the rate has only increased 0.3% from the previous month twice. In tune with this increase, the prime age labor force participation rate increased 0.6% to 82.6% which matched the highest rate of this cycle (assuming the cycle started in 2015 when the rate bottomed). This increase is an even bigger deal than the overall increase. As you can see from the chart below, this is the largest monthly increase since April 1960.

It might be revised lower because it was a very wide swing. If it doesn’t get revised much lower, it supports the notion that the labor force is relatively full.

Wage growth is probably the most important figure in this report because the labor force is nearly full. A bigger group of workers is getting a raise than earlier in the cycle when the unemployment rate was higher. As we mentioned earlier, the prime age participation rate is at a multi-year high.

Now we have a good news bad news situation. Take your pick. We will show both perspectives. The good news is in the past 10 Augusts, the payroll revisions have been positive 9 times. Obviously, with the recent historical negative revisions, everyone is wondering what the truth is. In this case, the truth might be better than the reported information. As you can see in the chart below, the average delta is 67,000 which means 197,000 jobs might have been created.

Now let’s look at the bad news. As you can see from the chart below, the payroll diffusion index hit the lowest level since May 2016. This means job growth is being spread across fewer industries.

Breadth might be hurt by the global slowdown, the trade war, or the manufacturing recession. Interestingly, out of 39 OECD composite leading indicators, just 13.5% are above 100 (meaning they are showing improvement). This level of breadth in monthly private payrolls is typically closer to 50,000 jobs added than 100,000 jobs added. Maybe a positive revision will improve breadth?

This was a solid jobs report even though private sector payrolls added missed estimates. We already knew job creation growth would slow this year because the labor market is filling up. However, the great news is positive real wage growth is providing fuel for the consumer. It could limit the impact of the tariffs. Solid real wage growth explains the amazing 4.7% real consumption growth in Q2. If there is another quarter of great real consumption growth in Q3, it will come as a shock to anyone expecting a recession.