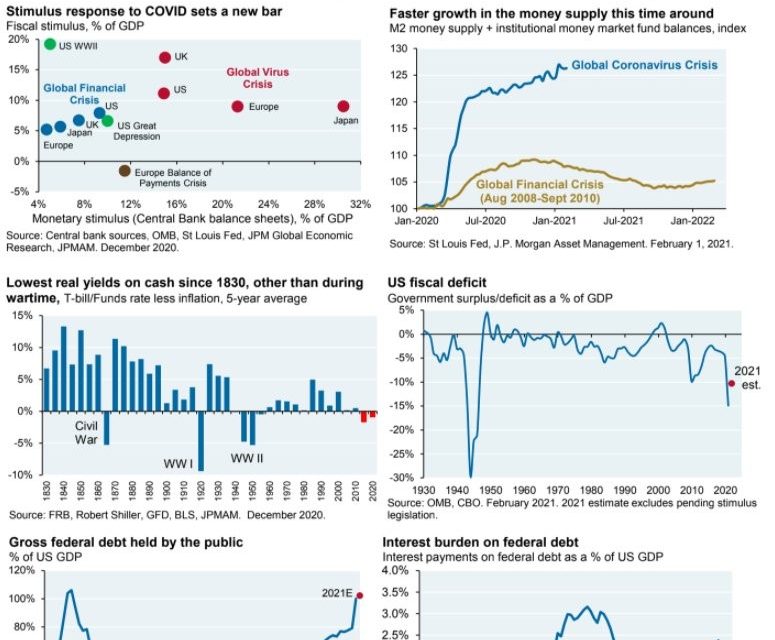 There are no hard feelings with investing. Making predictions is hard. The goal is simply to avoid making the same mistakes. If you’re going to be wrong, at least do it in a new way. The chart below looks a lot like the market’s historical predictions of the Fed funds rate. The market constantly predicted hikes too early last expansion; we think it’s making the same mistake this time. There won’t be any hikes through 2023 if the Fed gets its way.

This chart looks just like those wrong predictions, but it’s a different metric. It shows the historical debt to GDP predictions by the CBO from 2007 to 2021. The black line is actual results. The CBO has dramatically underestimated the growth in the debt to GDP ratio which is quite scary now because the CBO is currently predicting it to increase over the next 10 years.  The recent trend in the past 12 years has been for it to increase during recessions and not fall during expansions. Of course, the CBO can’t predict recessions, so it is usually wrong before them. Due to the new popularity of MMT and the aging population, we aren’t holding our breadth that the debt to GDP ratio will fall from 2022 until whenever the next recession hits.

We are in a new world where monetary and fiscal policy are extremely easy. In theory that should create a lot of inflation even with tough demographics. It’s possible recency bias is making people not believe in the inflation story These are unprecedented policies; using the recent past to gauge your thinking might not work. The top chart on the left is one of the best charts we’ve seen in measuring this unprecedented policy response.

As you can see, central bank stimulus as a percentage of GDP has been much larger in developed nations during COVID-19 than it was during the financial crisis which itself was unprecedented. Furthermore, the fiscal stimulus is larger all areas. The US fiscal stimulus during WWII was much larger than the stimulus during COVID-19, but the monetary policy expansion was much smaller. We’ve never had the Fed backstop corporate debt along with the government giving out three rounds of checks of this size.

Essentially, all the ideas that were mulled over in the past 10 years were tried. This recession was an excuse to go overboard with easy policy. That being said, the Fed managed to calm financial conditions and the government made sure no income group’s net worth fell. The consequence is the gross federal debt held by the public as a percentage of GDP is the highest since the late 1940s. We are about to set a new record.

Real yields were the lowest ever other than during wars. Will real yields turn positive once COVID-19 is over or are real yields a function of extreme monetary policy? We will find out in the next 12 months. If the 10 year yield starts to rise towards 3%, it will become a deficit issue. Currently, investors care a lot more about how rising rates will impact certain sectors in the stock market than how they will impact the government. That probably wouldn’t change if rates were to rise to 3%. It would exacerbate the decline in tech.

Rent Inflation Is Back

CPI should start to increase in the March report. It could get above 3% this summer. Shelter inflation is set to spike. The vaccine has reversed the trend in rents. As you can see from the chart below, the median rent in San Francisco rose 3.4% monthly in March. Yearly comps should get easier throughout the year. We are very interested to see how well the trend in San Francisco rents translates to the rest of the country.

A Massive Boost In Consumption Is Coming

There has been a wealth shock in America do to rising asset prices and transfer payments. Housing prices have exploded, stock prices have exploded, and even alternative assets like baseball cards have exploded. Forget about limiting the saying to ‘stocks only go up’. All assets have done well. Furthermore, the bottom half of the country got another $1,400. This growth in savings and net worth will inspire a huge increase in consumption. According to the analysis below, growth in household net worth causes PCE to expand 2 quarters later. Since wealth increased by 17%, we should expect a 12% increase in consumption. This boost will probably be greater than the historical average correlation because of the economic reopening.

According to OpenTable, in the week ending March 29th, the decline in restaurant walk-ins and reservations was only 26.7% as compared to 2019. If the recent trend in the last few weeks continues, we could see positive growth by May. About 77% of restaurants are taking reservations in America. The 7 day average of daily deaths in America has fallen to 1,003. We should see a complete return to normalcy when it falls below 500.

The CBO expects the debt to GDP ratio to rise over the next 10 years to above the peak during WWII. It gets dicey when you consider how the CBO has forecasted a debt to GDP ratio much lower than what has been reached recently. It could be interesting to see if there are any ramifications from higher rates. Does the government just accept higher deficits and do nothing or does it raise taxes? At this point, no one expects government spending to decline. Rent inflation is back which means CPI will spike in the coming months. We should see it get near or above 3%. There will be a massive boom in consumption this summer unlike anything we have seen or will see in a long while.