We Will Never Reach Full Employment? 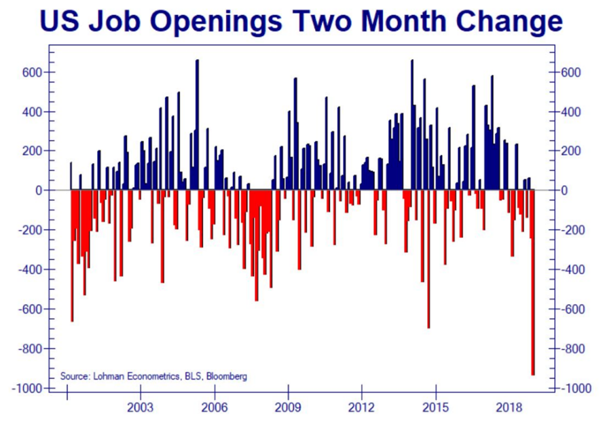 In the December JOLTS report, job openings fell from 6.787 to 6.423 million. Openings were the lowest since December 2017. They missed estimates for 6.775 million and the low end of the estimate range which was 6.7 million. This was the largest negative surprise ever. As you can see from the chart below, the 2 month change in job openings was the lowest ever by a lot. This is while the labor market didn’t even get worse as hiring increased and the other labor market reports from December were fine. It was quite the curious data point.

As you can see from the chart below, openings growth overshot to the upside in 2018 and is now overshooting to the downside. It did the same thing the prior two mini cycles in this expansion, but to a lesser extent.

Yearly growth was -14.1% in December which was the lowest of this expansion. The sequential 2 year growth stack fell 6.2%, but the comp was still near the peak, so we can partially forgive this weak growth. The comp got 3.1% easier and growth fell 3.1%. The 2 year growth stack was still positive as it was 6.5%. The main reason we can look past this decline is hiring increased.

Openings don’t mean anything without hiring. That became apparent this cycle when openings rose the farthest above hiring by far (this data only exists for 2 full cycles). Now openings are coming back in line with hiring. Some are saying a greater percentage of openings are leading to jobs because of a greater willingness to hire and train workers as the labor market gets more mature. Others say this decline in openings is because of business uncertainty. Openings don’t mean much if they stay in place without getting filled. That’s why we started focusing on hiring more when openings got way ahead of themselves earlier this cycle.

There’s nothing that indicates the labor market is getting much worse like openings state. You can see in the chart below that payrolls have been on a steady incline unlike job openings. In this JOLTS report, hires rose from 5.827 million to 5.907 million which is slightly below the record high of 5.991 million in April 2019. Yearly growth increased from 0.1% to 3.3%.

Yearly hiring growth was 1.7% in 2019 which was 0.2% below the cycle low of 1.9%. This makes more sense than openings because the labor market is showing signs of running out of slack. There just isn’t a sharp decline. The slack in the labor market has been coming from people who had given up looking for work, but have since come off the sidelines.

Construction job creation was strong as other labor reports have indicated. Construction hiring rose from 439,000 to 484,000 which was 4,000 below the cycle high. Q4’s yearly growth rate was 22.2% which was the highest growth since Q2 2011. The residential housing market is strong and construction was helped by the warm weather. Hiring in accommodation and food services rose from 897,000 to 966,000 which was 29,000 below its expansion high. The quits rate in the labor market has stayed at 2.3% in the past 4 months. That’s 0.1% below the cycle high.

We Will Never See Full Employment?

Powell was asked at a press conference if the Fed can achieve full employment. He stated, “We’re never going to say we’ve accomplished that goal.” That’s interesting because the Fed has been saying it’s close to full employment for a few years now. In October 2017, Patrick Harker stated, “While we’re essentially at the point of maximum employment…”

There are other quotes similar to this. The point being, this entire cycle the Fed overestimated the level the unemployment rate would bottom at because it believed there was structural unemployment caused by the financial crisis. Now that the labor market is getting close to full, the Fed is saying it will never be full. That sounds like the Fed will be wrong again. More importantly, this is a dovish statement because the Fed will never rest on trying to support the labor market with low rates as long as inflation is held in check which it has been this entire cycle.

In Q4 2019, the total amount of household debt rose $193 billion to $14.15 trillion. That’s a 1.4% increase. That’s a record high and the 22nd straight quarterly increase. Record debt isn’t a bad thing if assets also increase. It’d signal a problem if the debt didn’t increase. Non-housing debt hit a record $4.2 trillion. Housing debt rose to $9.95 trillion which is $40 billion off its record high in Q3 2008. It’s remarkable that 11.25 years later, mortgage debt is still below the peak. It will hit a new peak finally in 2020.

Within non-housing debt, credit card debt increased the most as it was up from $880 billion to $930 billion. Auto debt was up from $1.32 trillion to $1.33 trillion despite its high delinquency rate. The percentage of auto debt given to borrowers with below a 620 credit score rose from 19% to 20% which is still below the cycle peak of 25% in Q2 2015. Last cycle it peaked at 32%. Finally, student loan debt rose from $1.5 trillion to $1.51 trillion. Its 4.7% yearly growth rate is the slowest ever as it fell from 5%. It was impossible for student loan debt to grow in the double digits forever as it would have encompassed the entire economy.

As you can see from the chart below, the 90+ day delinquency rate on mortgages rose from 1% to 1.1%.

Hiring was solid in December. Don’t worry about the decline in job openings. They were too high in 2018 and are just normalizing. Powell stated the Fed will likely not rest on trying to support the labor market, which is a dovish statement. Households are in fine shape, but the delinquency rate on auto loans is worrisome. That could be partially why automakers expect sales to fall in 2020.