Was The September Labor Report Positive or Negative? 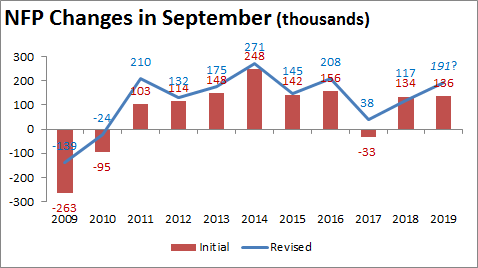 The fun aspect of the September labor report is that there are a few ways to look at it. Before we get into the details, let’s review how the market saw it. The market loved the report because it was a Goldilocks one. It wasn’t weak enough to signal a recession and it wasn’t strong enough for the Fed to consider canceling future potential rate cuts this year. That’s why stocks rallied after a report which missed estimates and was a continuation of the decline in yearly payrolls growth we have seen all year.

The BLS report wasn’t as bad as the Markit and ISM PMIs projected. The Markit report projected less than 100,000 jobs added. We’re not saying the stock market should fall because the trend of weak payrolls growth continued, but it did fall after the weak ISM manufacturing report showed a continuation of weakness in that sector. It’s notable soft data has been much weaker than hard data probably because of the trade war. Goldman Sachs’ current activity indicator shows 0.4% growth using survey data and 2.5% growth using hard data. We’d rather see hard data outperform.

The negative way to review the labor report is headline job creation missed estimates by 9,000, coming in at 136,000; private sector job creation missed estimates by 21,000, coming in at 114,000; and average hourly wage growth fell from 3.2% to 2.9%. Let’s take on job creation first and look at wage growth later. We’d say this was a solid report because the positive revisions were bigger than the miss. Specifically, August showed 168,000 jobs added instead of 130,000. July’s reading was revised up by 7,000 to 166,000. This doesn’t change the cyclical trend, but it’s still good news.

The 38,000 positive revision in August was actually below the average of 59,000 in the last 10 Augusts. September revisions are also usually positive as you can see in the chart below.

The BLS has revised the September report positively 9 of the last 10 years. The average upward revision in those years was 55,000. If this report is revised higher by that amount, it will come in ahead of the initial estimates. Our readers like to point out the big revisions this report often has. That’s why we look at the revisions and estimate where the next ones might be.

The government added the 3rd most jobs out of all the sectors. It added 22,000 jobs which beat estimates for 10,000. These jobs weren’t census related though as state and local governments hired 24,000 workers. It’s no surprise education and healthcare led the charge again as it added 40,000 jobs. The ADP report had it at 42,000. Manufacturing lost 2,000 jobs which isn’t terrible considering how poor the manufacturing PMIs were. The chart below shows the 12 month change in job growth.

The less-cyclical healthcare sector has had the highest growth. The more jobs in this sector, the less cyclical the labor market will be.

The household survey showed good results. The population increased 206,000. The labor force increased 117,000, the number of employed people increased 391,000, and the number of unemployed people fell by 275,000. This all caused the unemployment rate to fall from 3.7% to 3.5%. That’s the lowest rate since December 1969. As you can see from the chart below, the gap between the 3 month average of the unemployment rate and the 1 year low of the 3 month average signals there is a 0% chance of a recession.

Similarly, the U6 underemployment rate fell from 7.2% to 6.9% which is the lowest rate since December 2000. The lowest ever reading (since 1994) was 6.8%. It’s very close to a record low. The number of people not in the labor force fell 89,000. The labor force participation rate stayed at 63.2% which beat estimates for 63.1%. The prime age labor force participation rate stayed at 82.6% which matched the cycle high. It’s surprising it didn’t fall because it rose 0.6% last month.

The headline story in this BLS report was that hourly wage growth fell sharply. Specifically, monthly wage growth was 0% which missed estimates for 0.3% and August’s 0.4%. Yearly growth fell from 3.2% to 2.9% which missed estimates for 3.2%. That’s the weakest growth since July 2018. As you can see from the chart below, changes in average hourly earnings growth are impacted by which day the 12th of the month falls.

In September, it fell on a Thursday which is the worst average. In October, it will be on a Saturday which has a slightly higher average.

Since the length of the workweek was steady at 34.4 hours, average weekly wage growth also fell. It went from 2.9% to 2.6% growth which was the lowest reading since October 2017. The 5 basis point decline in the August CPI cushioned than decline slightly.

Usually, these workers do the best at the end of the cycle. The labor market is fuller now, so their wage growth matters more. They are being helped by the hikes in states’ minimum wages. As the chart shows, wage growth for managers plummeted.

Considering the weak employment readings in the PMI reports, the September BLS report wasn’t terrible. The positive revisions to job creation to the prior 2 months were bigger than the miss in September. Average wage growth fell sharply, but it was still strong for production and non-supervisory workers. This report was weak enough to allow the Fed to cut rates, but strong enough to ward off real recession fears. Based on the unemployment rate, there is a 0% chance of a recession. Recessions don’t occur when the unemployment rate is at a cycle low.