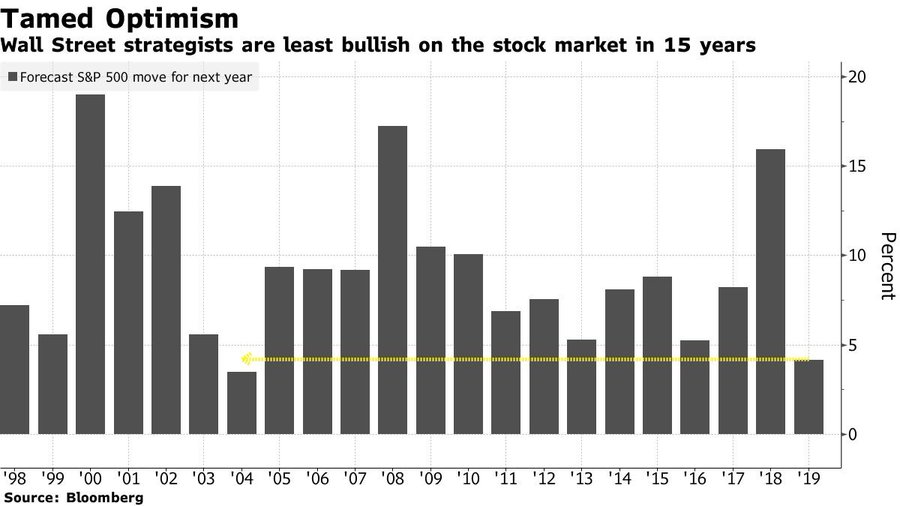 Specifically, the November Markit services PMI rose 1 point to 51.6 which matched its flash reading. It is still significantly below its long run average, but at least it’s above 50. The 52 composite PMI is consistent with 1.5% GDP growth which is slightly below the median Q4 GDP growth estimate which is 1.8%. Markit expects 100,000 in monthly job growth, but that’s less than 50% of the recent 3 month average according to the BLS.

New business growth improved from a slight contraction to positive growth which was the highest since August. International new business fell for the 4 the straight month. Just like in manufacturing, the 1 year outlook got worse. Businesses are worried about the global economy which is why they see no change in activity. The service sector’s workforce increased for the first time since August. This is way off from the official data. Maybe if this index was more accurate, it would reflect the economy better. The PMI could be in the mid 50s.

Just like the manufacturing PMI, the services PMI improved. It was helped by the US and China. The index increased from 51 to 51.6. Five of 6 subsectors increased, led by financial services. Business confidence hit a 4 month high. It’s no surprise that with both sectors improving, the global composite index was up as well. It increased 0.7 to 51.5 which is a 4 month high. October’s reading was a 44 month low. China’s PMI hit a 21 month high. The global new business index rose 0.4 to 51.2 which is a 4 month high. Employment rose from contraction to expansion as it increased 1.1 to 50.9.

It’s no surprise that with great real wage growth, a low unemployment rate, and a high demographically adjusted labor force participation rate, that the consumer is very confident. This has been a good holiday shopping season. The University of Michigan preliminary December consumer sentiment index rose from 96.8 to 99.2. That’s 0.9% yearly growth. Growth won’t be high because sentiment can’t get much better. If it doesn’t decline, it’s good news. The 3 year average is 97, which means it got above that this month. This is the highest plateau since the 1990s.

The current index was up from 111.6 to 115.2 and the expectations index was up from 87.3 to 88.9. The gain in December was primarily from upper income households who had record gains in wealth because of the rise in stocks. Those with incomes in the top third had their third best assessment of their personal finances in 20 years. Their improvement was helped by record low long term inflation expectations.

As you can see from the chart above, those over 55 are much more confident than those under 35. That’s probably a combination of wealth and politics. Those over 55 have more money in stocks, which have been rising, than those under 35, which have their wealth in potential earnings. Also, in this latest update, confidence among Republicans rose and Democratic confidence fell. Older people tend to be more conservative and younger people tend to be more liberal.

This is old data, but it’s very interesting. According to the BLS, in 2018 the number of people who experienced unemployment during the calendar year as a percentage of all people who looked for work hit a record low. It was 7.8%. The previous record low was 8.6% in 2000 & 2017.

The chart on the left shows the proxy for nominal income growth in November was 4.7%.

The actual data comes out December 20th. As you can see, it is calculated by multiplying payroll employment by average hourly earnings and the length of the workweek. The propriety survey on the right shows the 4 week average of the yearly growth in those who spent over $100 in the past week increased.

Wall Street is predicting a 4.3% gain in the S&P 500 in 2020. Wall Street is always positive because it wants clients to stay invested, however, this is a relatively bearish prognosis. It’s the 2nd most bearish prediction since 1998. It’s actually not something you want to be on the other side of. Wall Street was correctly bearish before the 2000 top, bullish before the 2009 bottom, and bullish on the current year which has provided over 20% returns. Remember, the label year is the prediction for the next year.

It’s easy to see why Wall Street isn’t optimistic. Stocks have already priced in the potential economic acceleration next year. Therefore, there shouldn’t be multiple expansion. If the market relies only on earnings growth to power returns, you’ll get 5.5% gains in 2020 according to FactSet estimates.

The US and global Markit services PMIs increased, suggesting that this might be the start of the cyclical acceleration. Consumer sentiment is optimistic and actual data shows the consumer has spent a lot this holiday shopping season. Wall Street is predicting 4.3% gains in 2020 which is actually very pessimistic for a group that never predicts declines. It’s not in their best interest to say stocks will decline. Wall Street has correctly predicted some of the biggest turning points in the past 21 years. However, it was early on the last crisis as it was very bearish on 2005, but it should’ve been bearish on 2008.