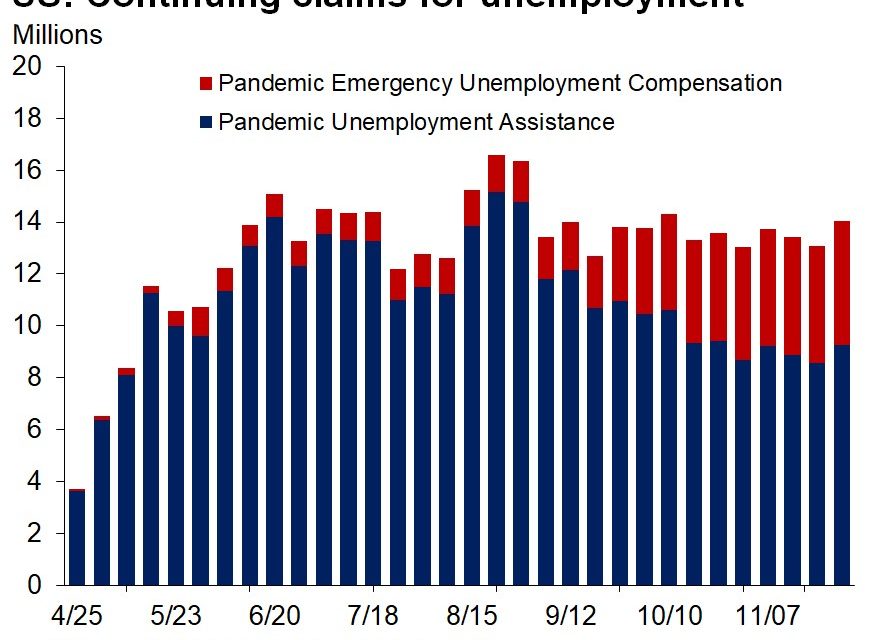 The reason we started this website is to follow financial markets and the economy based on all available data and perspectives. We didn’t want someone feeding us a story. As a result, this by itself makes our content lack sensationalism. That’s good if you want to know what is really going on, and bad if your objective is to have more readers, but that’s neither here nor there. You wouldn’t want someone only showing you what supports their perspective or previously held views. Therefore, even though we have put out the possibility of their being negative job creation in December, just two days ago, we will discuss the surprising sharp fall in initial jobless claims in the week of December 19th. Firstly, let’s mention last week’s report was even worse than initially shown as claims were revised up 7,000 to 892,000. This week claims fell to 803,000 which was below estimates for 875,000. Economists mostly expected a continuation of the weakness, but instead there was a sharp drop in claims.

It’s not as if this decline was caused by the seasonal adjustment. Non-seasonally adjusted initial claims fell from 942,000 to 869,000. For at least one week, initial claims got better. It’s worth mentioning a large portion of this drop was in California which is known for having suspect data. It stopped accepting claims earlier this year to get rid of some of the fraud. There was a 48,000 decline in California.

Furthermore, there was a decline of 18,000 in New York. Given the large decline in high frequency data in New York, this is surprising. It could be a one week wonder. Then there was a 7,000 decline in Texas. We don’t expect an uptick in claims when the $300 in extra benefits start going out. That adds up to about 85% of normal pay. People want to work, not get slightly less pay for 11 weeks and then get cast aside by the government. It’s worth mentioning, the bill has been delayed by Trump’s call for a $2,000 check instead of $600 which was soundly rejected by Republicans in Congress.

PUA claims fell 57,000 to 398,000 which pushed down the combined total by 8% as you can see in the chart above. This decline was impacted even more by the top few states. In fact, the top 3 states equal the entire decline. They fell 33,000 in Nevada which makes sense because of the big spike recently which was probably some sort of error or fraud. They fell 13,000 in Oregon and 11,000 in Indiana.

The chart below shows the about 14 million people who would have lost unemployment benefits if it wasn’t for the stimulus. Given the fact that there has barely been any decline since June, it might be a little optimistic to say 11 weeks is enough. It depends on how many people politicians are willing to allow to go without benefits. Hopefully, this falls sharply in February and March as the economy reopens, but expect them to be all gone is a bit of a stretch.

In total there are 20.36 million people on some sort of benefits (in the week of December 5th) which is down from 20.65 million. As of December 24th, 1.23 million doses of the vaccine were given out in America which is way below the 20 million goal. However, consider Pfizer had a delay. Plus, the first, most important goal, is to get everyone who wants the vaccine 80 years old and over vaccinated. As of 2010, there were slightly over 11 million people 80 and over.

Continuing claims fell from 5.507 million to 5.337 million. They continue to fall, but there are over 20 million people on all benefits as we mentioned. Unfortunately, much like the unemployment rate, this signal of improvement is a little too good to be true.

Personal consumption expenditures were down 0.4% monthly after increasing 0.3%. That missed estimates by 2 tenths. Real spending is down 2.7% from pre COVID-19 levels. That’s all because of services which are down 7.1%. Real spending on goods is 7% higher than before the recession as people are spending more time in the home which is leading to more durable goods purchases. Plus, people purchased more used cars to avoid public transportation.

As you can see from the chart above, there was a 0.9% increase in spending on food and beverages as people stocked up for the pandemic like in the spring. Food services spending fell 4.1% as restaurants started to close. This category will do even worse in December. The savings rate fell from 13.6% to 12.9% which is still above the pre pandemic level which was 8.3% in February. We want people to save less because they are confident, not because they are running out of money.

The University of Michigan consumer sentiment index actually rose in December from 76.9 to 80.7. Present conditions increased from 87 to 90 which is much different from the Conference Board survey. Expectations were up from 70.5 to 74.6. There has been large movement because of politics. 54% of Democrats and 32% of Republicans expect a continuous expansion over the next 5 years. Those numbers were 27% and 60% three months ago. The totals are about the same in each period though. They are just switched.

This was a surprisingly good jobless claims report, but the stimulus is still needed to keep 14 million people from losing their benefits. We will look for the data to start improving in February or March as the vaccines go out. The PCE report was mostly weak as consumer spending fell, but wages and salaries actually hit a record high because the weakness in income growth was caused by sole proprietors. Consumer sentiment improved in December which is the opposite of consumer confidence.