Volatility Could Be Coming In The Fall 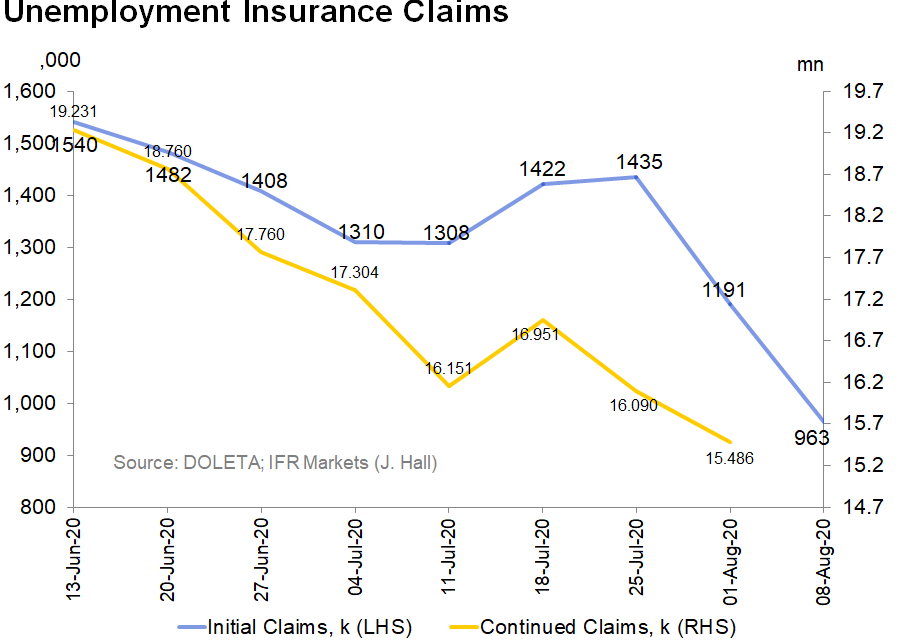 The labor market is starting to improve at a stronger rate after having a setback in July. You can see in the chart below how initial jobless claims stabilized and even rose a couple weeks in July. With the strong decline in claims since the BLS’s July survey week, we expect the August BLS report to be stronger than July. Then again, July’s report wasn’t correlated with other data like claims, so it’s tough to be certain. Next week’s initial claims reading is in the survey week, so we will look out for that reading.

Specifically, in the week of August 8th adjusted initial claims fell from 1.191 million to 963,000 which was below the consensus of 1.15 million and the lowest estimate which was 1.05 million. To be clear, claims aren’t falling because the weekly additional benefit from the federal government was lowered from $600 per week to $300. The decline is likely catalyzed by the decline in new daily COVID-19 cases. Other economic reports like Redbook same store sales growth have and will also show the economy improved in August. The decline in initial claims in the past 2 weeks of 244,000 and 228,000 is phenomenal. At that rate, initial claims would be back to normal in 3 weeks. To be clear, the labor market and the economy won’t be back to normal by then as there are millions of continued claims which we will get to later.

Non-seasonally adjusted initial claims fell from 988,000 to 832,000. In the past 4 weeks, the average decline has been 170,000 which would get claims back to normal in 4 weeks if that rate continued. The decline will likely taper off. We are just highlighting the recent good news. The biggest declines were in Florida, New York, and Texas which saw unadjusted claims fall 23,000; 22,000; and 11,000. PUA claims also fell, but that was partially because of a crackdown of fraudulent claims. Specifically, PUAs fell from 656,000 to 489,000. The additional weakness in the labor market as shown by PUAs is far from over though as there were 10.7 million continued PUA claims.

Anyone saying the economy is starting to get back to normal because unadjusted initial claims are below the last recession’s peak is foolhardy. The point of using initial claims to highlight the economic improvement is to gauge where cyclical stocks are headed. However, the labor market is still in trouble. In the week of August 1st, there were 15.5 million continued claims which was down from 16.1 million.

At the peak of the last recession, there were only 6.6 million claims even though the current labor market and population aren’t that much larger now. The 604,000 decline is below the prior week’s 861,000 decline. The good news is there should be a strong decline next week based on the big decline in initial claims. We’re still at least a few months away from getting to the worst point in the last recession which had been the worst recession since the Great Depression.

With retail and professional investors practically all in on the stock market and it being near its record high, everyone wants to know what the catalyst will be for the next decline. The presidential election is the next big event. As you can see from the chart below, the VIX term structure is elevated in the fall as investors are buying protection in case there is volatility.

It’s difficult to see this election causing a sharp correction in stocks because Joe Biden already has a 59% chance of winning and has an average lead on Trump of 7.7% in the national polls. This is an expected risk. The less likely event would be the economy storming back, helping Trump win the election. That’s not a negative catalyst since Biden favors raising corporate tax rates.

This bull run won’t end because of a widely expected event. It might not even take a catalyst. The speculation can simply get too far and then end. That’s not an interesting thesis. Surely, after the decline in the hottest stocks, some will come up with a reason why they fell. Sometimes these types of reasons are people looking for answers when the real answer is just prices got too high.

People get confused by valuation being a reason stocks fall because there never is a specific price that’s too high. The market can blow through every valuation warning sign for months before it reverses course. That’s why we say valuations matter in the long run, but not in the short run. The fat tail catalyst for a sharp correction, with the hottest stocks crashing, would be if the Fed acted. There would need to be a policy which took froth out of stocks without hurting the economy because the Fed wouldn’t hurt the economy just to get froth out of the market.

Disruption Is The New Popular Term

Clearly, there is innovation in sectors outside of technology. There is innovation in every industry even though it might not be as sexy as AI or 5G. The most popular term is disruptive technology. There is no rule to determining the success of these growth stocks which are in almost every industry. As an individual stock investor, you must measure the risk of incumbent companies getting disrupted and the valuations of the new companies taking share. There is nothing wrong with investing in disruptors. However, recognize the recency bias behind selling value stocks and buying the new companies growing quickly.

Value stocks have been underperforming for 13 years which is long enough for many analysts to say value is never coming back. The catch is when a group of stocks is left by everyone, they become the most valuable. Furthermore, some analysts say cyclical stocks (which make up a lot of value) can’t outperform now because the end of the recession and bottom in the stock market occurred months ago. Be very careful of analysis that effectively says these stocks can’t do well because they haven’t done well.

Jobless claims are falling which is great for the labor market. There are still months of improvement left before continued claims even get below the peak of the last recession. The VIX expects wild trading in October because of the election. It’s tough to see the election causing a significant correction since it’s already known. The most surprising thing would be if Trump wins, but that would ensure taxes stay low, making it arguably a good thing for stocks. Disruptive technology stocks have been huge winners in the past few years which is encouraging more people to buy. Value is eschewed because it hasn’t done well.