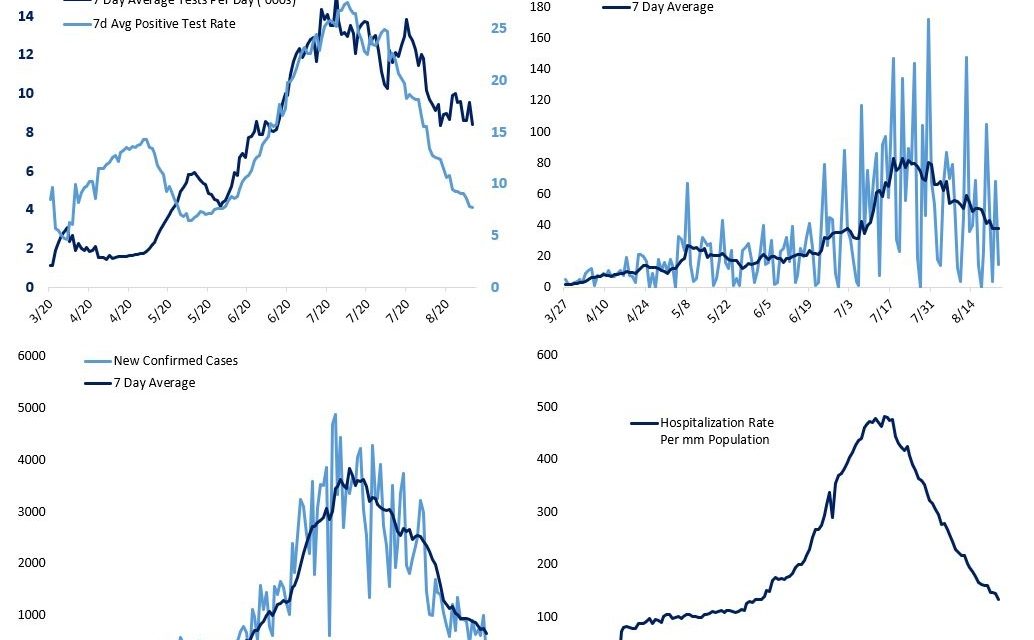 It was very difficult to determine how quickly states would start giving out the $300 or $400 in federal weekly unemployment benefits. So far, Arizona is the only one to start giving out the money, but 26 states are now set to give out benefits in the coming weeks which could set up nicely for a modest boost in consumer spending in September. South Dakota is the only state that refused the subsidy; Kentucky and Montana are giving out $400. New York and Texas are 2 of the 26 states set to give out benefits which is important because the first group of states didn’t include any big ones. The charts below show the weekly benefits. As you can see, there is a small bump in the week of August 21st. It will increase modestly in the following weeks.

There are rumors a stimulus is becoming more likely in September. The Senate is adjourned until September 7th. That makes the August jobs report, which is coming out on September 4th, critical. If it is weak, a stimulus is more likely to pass. In other words, this could be a win/win for cyclical stocks. Either the report is great, which implies the recovery is on track, or it’s weak and a stimulus is passed. It makes complete sense to pass one more stimulus because we are right before an election and the economy is still weak.

The impact of COVID-19 is shrinking because the hotspots are successfully dealing with the virus. Arizona was the first hotspot to see an increase in cases in June. On Monday, there were no COVID-19 deaths in the state. As you can see from the charts below, the positive rate, hospitalizations, deaths, and cases have been falling steadily.

The heftiest economic restrictions are gone. The question is when the economy fully goes back to normal in terms of people working on-premise, kids all going back to school, people dining in restaurants, and people flying again. The 7 day average of national deaths has fallen to 980 which is the lowest since July 27th. That’s probably not good enough to get a complete return to normalcy. There is no specific number that will change behavior, but a continued decline will eventually get us there. It’s worth noting that even with some in person schooling opening in August, there hasn’t been a spike in new cases.

Small business is mirroring the labor market in that some jobs were permanently lost and many came back. As of August 15th, 1.5% of small firms were permanently closed and 8.5% returned to normal. An additional 15.2% said they would return to normal in less than 1 month or that there was no effect from COVID-19. The problem with permanent closures is we might not see an immediate increase in new openings especially with the sheer domination of the tech giants. These big tech firms have outgrown some of their initial businesses and are hungry to take more over more of the economy. That being said, it’s worth noting Facebook provides small firms with tools to advertise, sell, and create events. It’s not all bad news from big tech.

It seems like once in a generation investors get reminded of valuations. There was the nifty 50 bubble in the 1960s and 1970s, the technology bubble in the late 1990s, and this current bubble. These bubbles are created through flawed simplification. Investors believe if they buy good companies with strong competitive advantages, price doesn’t matter. These quality and growth firms should trade at a premium, but the relative premium is where the muddy waters get involved.

As you can see from the chart below, Apple and Amazon trade at 2021 PE multiples of 33.31 and 55.43. That’s a particular problem for Apple since it’s no longer a growth firm.

This table leaves off Netflix which also has a high PE ratio. Obviously, analyst estimates play a major role in investing based on forward multiples. Keep in mind, when investors get excited about a stock, analysts do too, which can create a toxic combination if the optimism isn’t warranted. It’s extremely easy for analysts to come up with models that fit with the current price instead of being objective.

It’s worth noting that the other 495 firms in the index have a PE multiple of 18.56. Since this includes many cyclical stocks, these estimates could be too low if the recovery beats estimates (meaning they could be cheap). Normally, cyclical stocks outperform at the start of a recovery. However, these cyclicals don’t do well in a pandemic. The market decided to price stocks as if this new world of COVID-19 will last forever. That sounds ridiculous because the virus won’t last forever. However, the thinking is that previous trends were accelerated. We will see if these trends reverse when the economy returns to normalcy in 2021 (assuming another wave doesn’t come).

Hedge fund hotels or hedge fund VIPs have done well in 2020. As you can see from the chart below, the 2 year forward PE multiple of the hedge fund VIP basket is at 28 as it has gone vertical. It’s further above the S&P 500’s PE multiple than ever before (since 2002). 31.5% of these stocks are in the tech sector.

The top 5 stocks in order are the following: Tesla, Sea, Carvana, Apple, and NVIDIA. It’s problematic that 3 of those 5 aren’t profitable (Apple & NVIDIA are profitable). When managers all crowd into stocks, there are sometimes crashes like Valeant (although Valeant’s fundamentals played a major role in that decline).

The additional $300 in weekly unemployment benefits coming in September should help consumer spending. COVID-19 deaths have been falling. National results should follow Arizona’s lead since it was the first hotspot in the 2nd wave. The big 5 internet stocks are expensive, but the rest of the market doesn’t have a high multiple when you consider the potential for a cyclical recovery through 2021. Hedge fund hotels have done really well. There might be too much crowding in them.