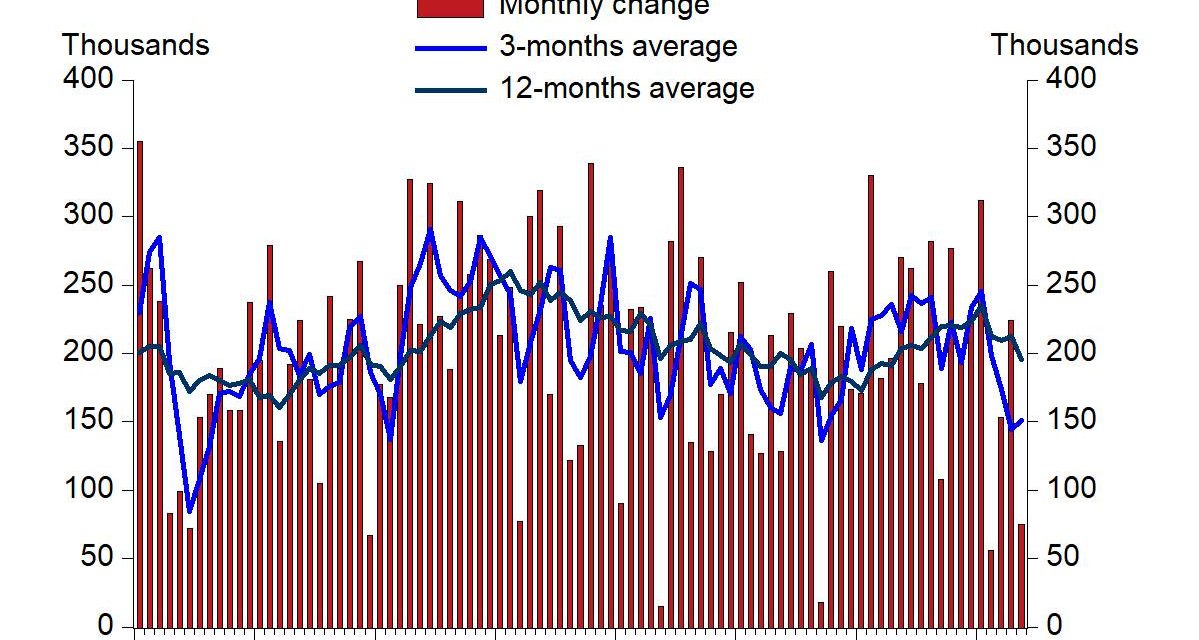 The best way to describe the May labor report is most of the stats were consistent with a full labor market; the notable exceptions were the declines in the prime age labor force participation and yearly wage growth. In a full labor market, you see job growth consistent with population growth, the unemployment rate low, and high wage growth. This report was tarnished by the negative revisions to March and April. They were pushed down by the exact amount of jobs created in May. Technically, there were no new jobs created.

The May reading gets all the headlines, but we follow the revisions just as closely because that data is more accurate. In the past few years, we’ve seen shocking headlines which end up being revised in the next couple months. In a sense, investors were shocked by results that ended up being inaccurate. Usually, when a report misses estimates by a lot, it gets revised higher and when a report surpasses estimates, it gets revised lower.

As you can see in the chart above, there were 75,000 jobs created in May. The 12 month average of job creation is firmly in a downtrend. The April report was revised down 39,000 to 224,000 and March’s reading was revised down 36,000 to 153,000. May’s reading missed estimates for 180,000 and the low end of the estimate range which was 90,000. Economists clearly had tunnel vision when it came to setting estimates as they only focused on the positives which were found in the jobless claims, the small business survey, and the consumer survey. Also, both ISM surveys’ employment readings increased.

There certainly were more positives than negatives, but it wasn’t impossible to see this coming as year to date job cuts were up 39% and the ADP report showed only 27,000 jobs were created in May. Economists have been so used to the ADP report being inaccurate, they missed the obvious by not lowering their estimates. To be fair to economists, even the bearish Markit report expected 150,000 jobs created. We wouldn’t be surprised if this BLS report is revised modestly higher in the next 2 months.

There has been some hype about the possibility of the government starting to hire workers for the census, but that didn’t occur in May. The federal government only added 4,000 jobs in May and 1,400 were at the post office. There will be a burst in hiring within the next year, but that hasn’t started yet. As you can see from the chart below, the government had a net change of -15,000 jobs. Since we’re focused on the private sector, this means private sector job creation missed estimates slightly less than headlines indicate. There were 90,000 private sector jobs created which missed estimates for 175,000. That’s an 85,000 miss instead of 105,000.

The net -7,600 job creation in retail trade is consistent with the industry having the most announced layoffs this year as seen in the Challenger Job Cut report. This BLS report was largely in line with ADP as there were 27,000 jobs created in education and health compared to the 33,000 seen in the ADP report. That category isn’t cyclical which makes surveys more consistent. The biggest difference in this report is in construction. The BLS report shows the industry added 7,100 jobs, while ADP shows 36,000 jobs lost. That’s consistent with this industry being cyclical and ADP having a low correlation with BLS in this industry. Relatively speaking, the 3,000 jobs added in manufacturing is solid because most indicators show the sector in a slowdown. The ISM report was correct to have an improvement in its employment index.

U3 & U6 Unemployment Rates

The cycle peak was 3.6% in October. This is the lowest reading since January 2018. The only good news for workers is inflation is also falling as May headline CPI is expected to fall from 2% to 1.9% and oil recently hit a 5 month low. The 5 year breakeven inflation rate fell from 1.84% in April to 1.71% in May.

The headlines tell you this report was bad because of the negative revisions and the disappointing May job creation. The details of the household survey in terms of the number of employed people, the size of the labor force, and the number of unemployed people was actually an improvement from April which had terrible numbers. The prime age participation rate shows the labor market has slack, while the U6 rate says it doesn’t have much slack. Weekly earnings growth fell, but at least inflation is also falling.