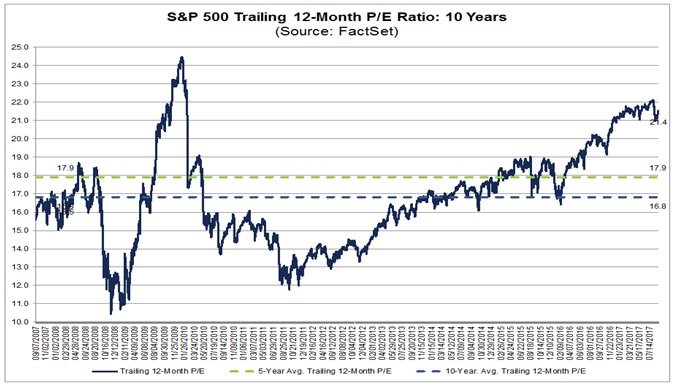 In this article, we will provide clarity to our discussion with two of the top financial minds on Twitter: Michael Lebowitz, the founder of 720 Global, and Dale Wettlaufer, the CEO and CIO of Charlotte Lane Capital. Keep in mind, the goal of discussions on Twitter with some of the top minds is to learn from them by playing devil’s advocate. If we ask why something is true or say an argument is unclear, we’re not disagreeing with them; we’re pushing them to provide their best arguments to learn more. The mindset of an investor should always be to learn. You gain nothing by winning an argument, other than a quick hit of endorphin. It’s not about winning or losing a debate. If anything, being proven wrong means you learned more. We think there was some great learning points in this discussion which is why we’re elaborating on it.

The conversation started out with Mike complaining about the state of the market because of the “crappy economic data”, North Korean missile strikes over Japan, and other terrorist activity are occurring while the stock market rises. He claims this means the market isn’t acting freely, implying the Federal Reserve has a hand in the action. The reason why we commented on this is because earnings have improved this year among S&P 500 companies, providing a backdrop for favorable action. Political conflicts causing selloffs have been buying opportunities in the past few years as we live in one of the most peaceful periods in history. While there’s a reasonable case to be bearish on stocks, conflict with North Korea may not be one of them.

“Crappy economic data” is an opinion which can be argued, but investors need to keep in mind much of the bad economic data has been caused by hurricane Harvey. The industrial production and retail sales results missed estimates because of the storm, which won’t have a long term impact on the economy. As we detailed previously, the broken window theory is false, and destruction does not help the economy. The worst affected may never recover their businesses nor standard of living which is heartbreaking, but for the most part, this weakness will pass. 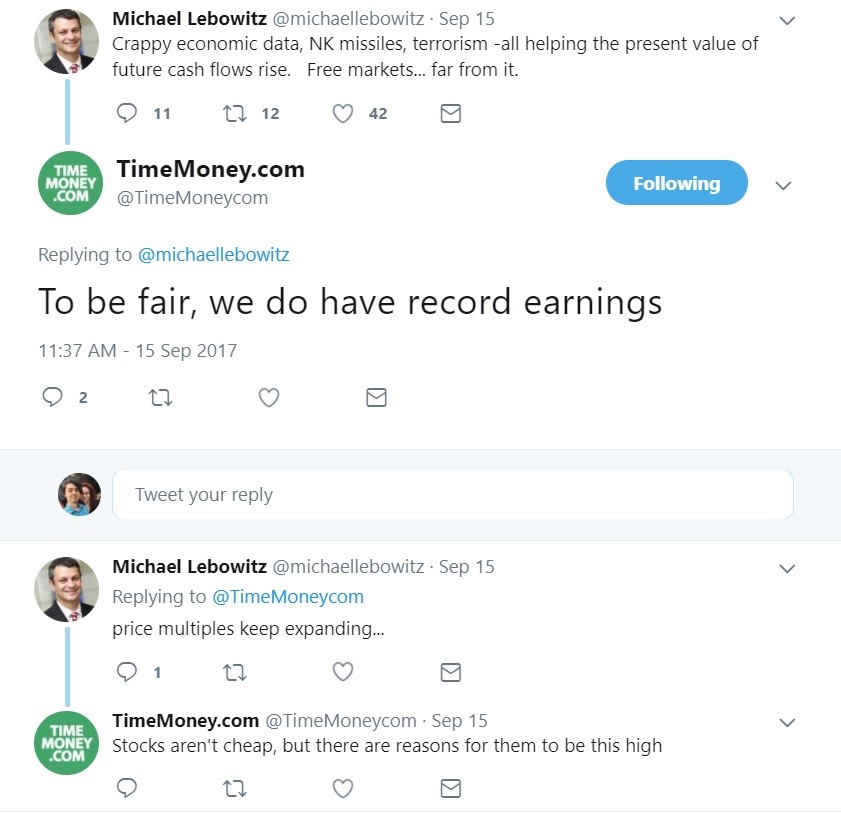 Mike says P/E multiples have been expanding. It depends which ones you look at. The 10-year Shiller PE has been increasing. However, with earnings increasing the trailing twelve-month P/E multiple has fallen from the cycle peak a few weeks ago. The point we made is stocks have above average multiples for a reason. We’re in a Goldilocks scenario where we have easy monetary policy, decent economic growth, strong earnings growth, and baby boomers loading up on stocks at their peak wealth age range. The political scenario is potentially promising if there is deregulations and tax cuts. While this may not lead to a windfall for corporations, there isn’t a scenario where taxes will be raised which lowers risk. The important takeaway here is that valuations aren’t an absolute way to predict where stocks are going; they’re more of a gauge to see if trends have gotten out of hand. There’s no reason to be surprised at stocks being ‘expensive’ because the environment supports that.

The next part of the discussion was with ValueTrap on Twitter. As you can see, he picks out a chart which shows stocks don’t have record earnings to counter our claim. That looks like a trailing twelve-month calculation. It also excludes financials, making it distorted. There’s nothing wrong with excluding financials, but we were referring to the entire market. As you can see from our tweet, Q2 operating earnings for the S&P 500 were the highest ever. Then ValueTrap shows how earnings growth has been a tepid 1.7% in the past 3 years. That’s because of the earnings recession in 2015-2016. He makes the fair point that earnings growth hasn’t supported the rally in stocks enough to justify these current prices. 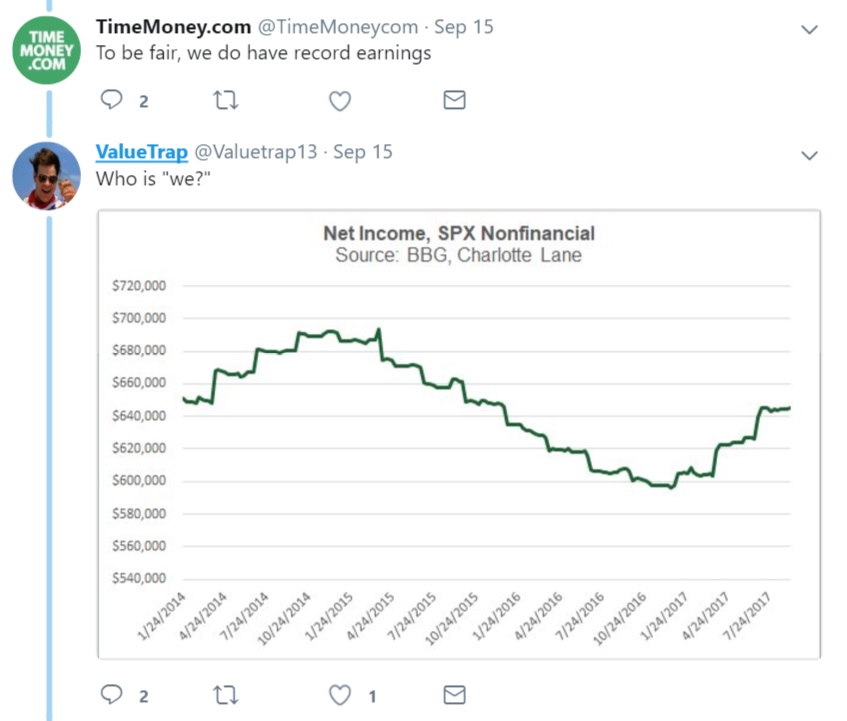 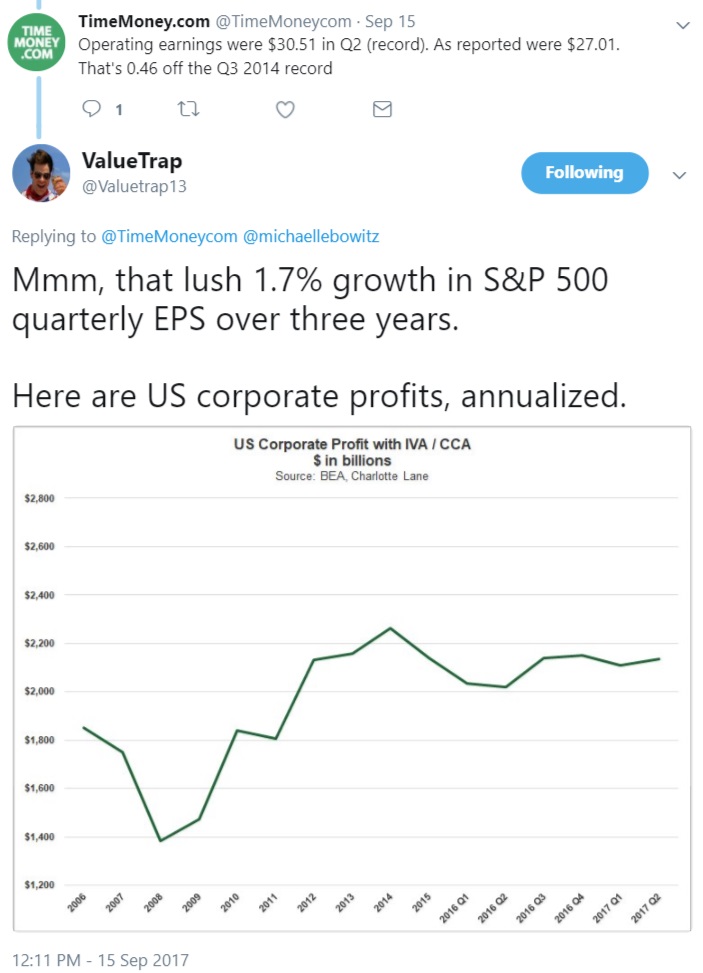 The next point we make is critical. One philosophy of investing, which we think is reasonable, is that there aren’t good or bad securities, only good and bad prices. You can buy a bad business and make money if the stock is cheap enough and vice versa. We said that ValueTrap must be bearish on stocks because he thinks future expectations won’t be met. Complaining about how poor past results were isn’t a great argument for being bearish because everyone knows the past. Companies are valued based on future results. Those results are unknown, thus making a market. ValueTrap says the market isn’t always correct; it just reflects the aggregate viewpoint of investors. This is the right mindset. The further you go into the future, the less likely projections will come close to being met. This is why stocks vacillate instead of moving up in a perfect slope like he says. 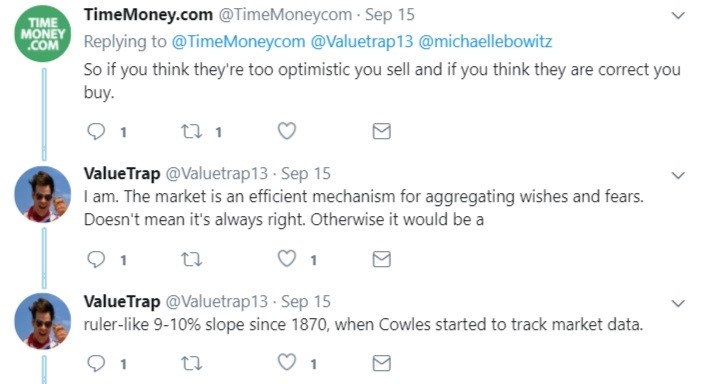 Stocks Don’t Go Up In A Straight Line

The final two points ValueTrap makes are in the two charts below. He says the market isn’t free because the central banks are purchasing assets. This is a great point because volatility has been squashed in equity markets and yields have been suppressed during the time of expanding balance sheets. The exact effect is unknown, but there’s no doubt central bank interventionism isn’t capitalism. The second chart is a poor point because he uses past results to indicate future earnings performance. Just because the chart makes it look like earnings are about to slow, doesn’t mean much. You can’t look at recent earnings and extrapolate past reports into the future. It’s fine to have lower earnings expectations than the consensus, but those are projections, not an analysis of past results. 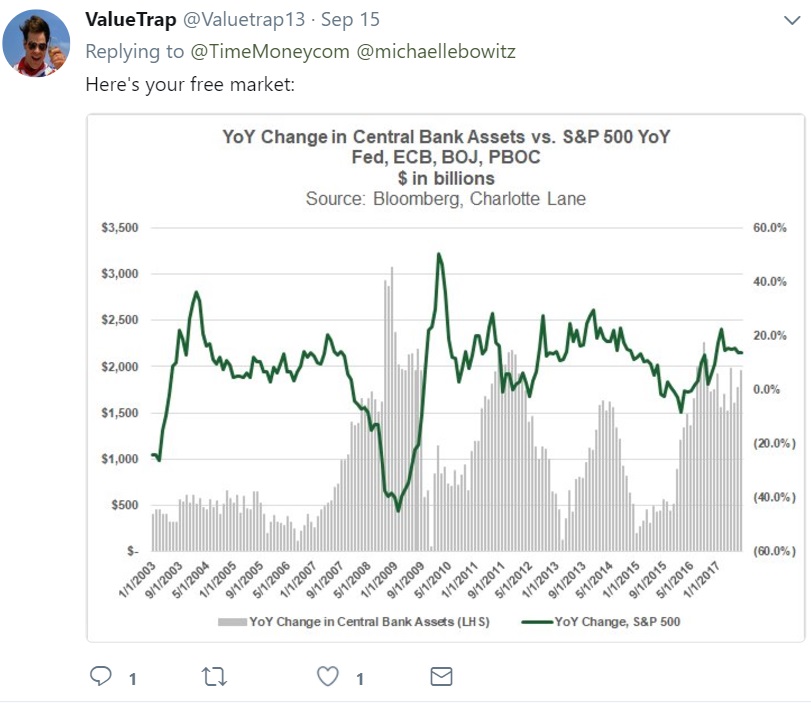 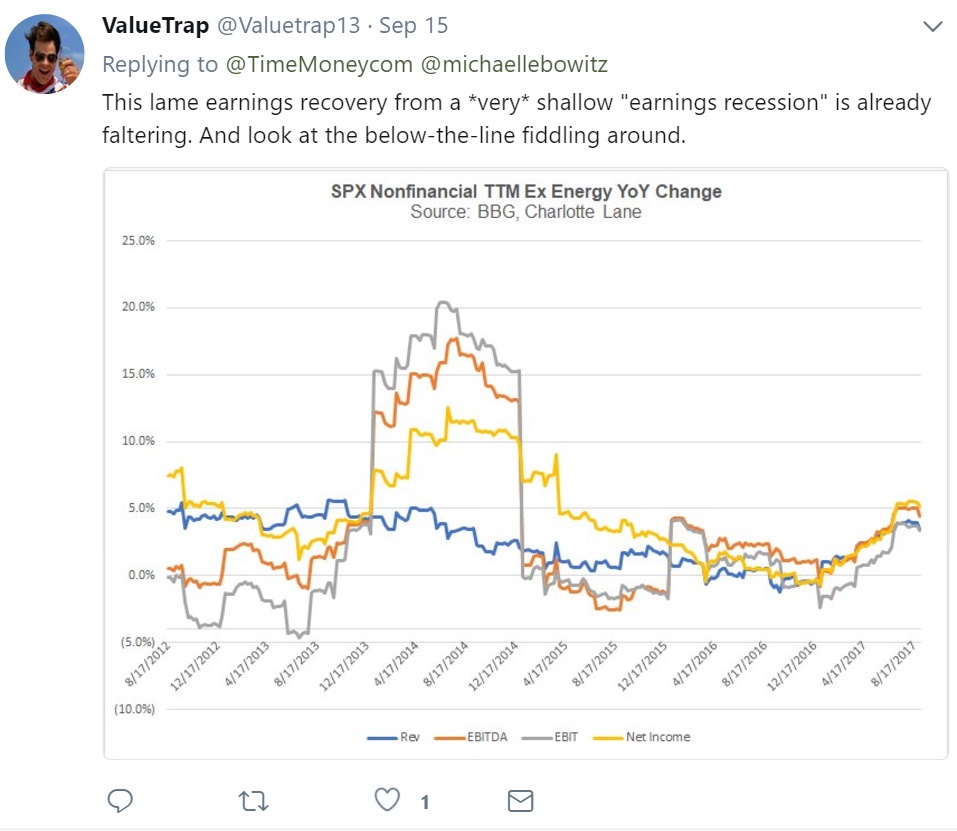 The final points Mike makes are seen below. He believes that the central banks will do whatever the stock market wants. The confusing part about this logic is it doesn’t make sense to be bearish if you think the central banks will always support the market; he’s making a bullish argument for the medium term. Central banks won’t be able to keep the market up forever, but it has supported this bull market for 8 years, so it would make sense to ride the wave while being hedged. The final point we make is whatever Draghi does this fall will have a big effect on stocks. Most are expecting him to lower the ECB bong buying program by 20 billion euros to 40 billion euros per month starting January 2018. 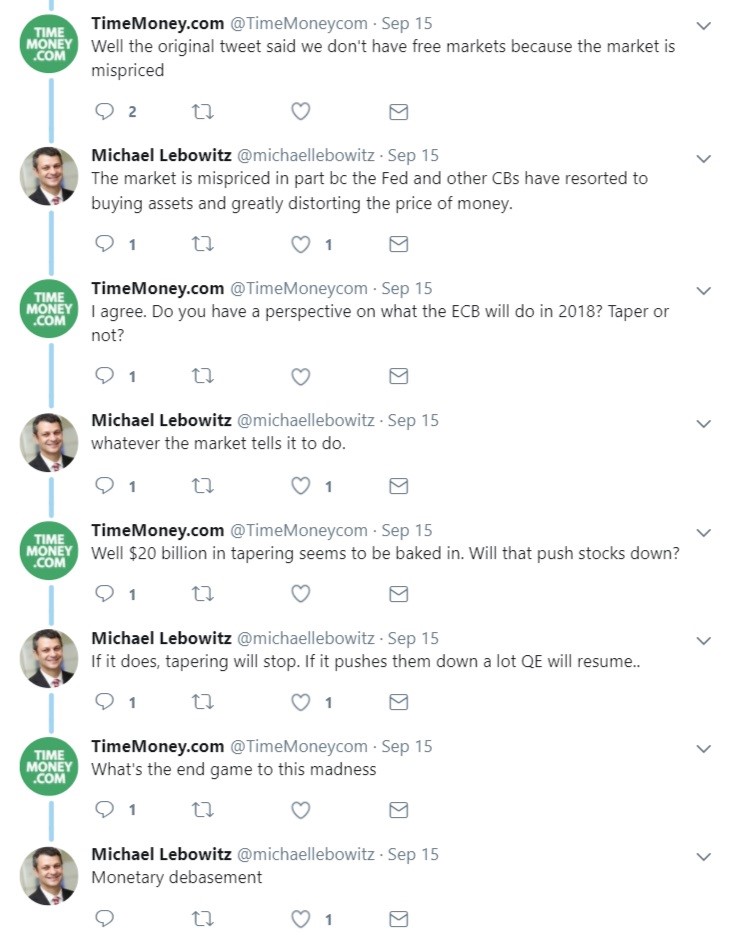 The way knowledge is exchanged now has changed from the way it was 20 years ago. There used to need to be cameras broadcasting interviews to a TV station; now we have Twitter to exchange ideas. The best part about the internet is we can look up exact stats instead of talking off the cuff in an interview. We had time to look up the exact Q2 earnings results. This is what makes this conversation valuable to observers, which is why we shared it in this article.