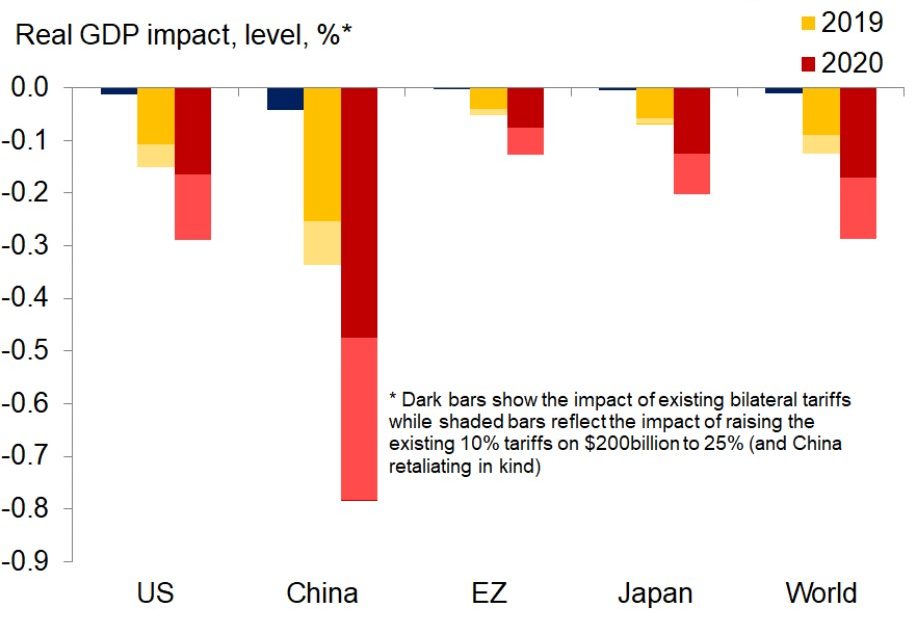 Heading into May, the trade talks appeared to be headed in a positive direction, albeit very slowly. We’re hesitant to trust politicians/officials when they discuss major dealings because history has shown us more often than not politicians kick the can down the road rather than getting anything done. In America, politicians face elections every 2-6 years which makes tough votes and decisions not in their best interest.

This healthy skepticism of an all-encompassing trade deal with China being done in the near term was accurate as according to President Trump, Chinese leaders now want to renegotiate part of the deal that was agreed upon. America’s goal had been to strike a deal with China that could be enforced.

It’s fair to be skeptical of the reasons the media gives you as to why stocks moved. In this case, the stock market was overbought and there have been a few negative economic reports recently such as the ISM PMIs. Hiring in the JOLTS report also fell 0.6% monthly in March. You can look at which stocks declined to determine if the sell off is trade related. We like to look at the Dow versus the Russell 2000, the semiconductors, and stocks like Emerson Electric to determine trade’s effect on the market. You can also use soybean prices which are a key export from America to China.

On May 5th, Trump tweeted that America would be raising the tax rate on $200 billion worth of Chinese goods from 10% to 25%. This occurred on Friday the 10th. He also threatened to tax an additional $325 billion worth of Chinese exports at a 25% rate. One nuance, is the tariffs go into effect when goods reach America. Anything that left China already won’t be taxed at the new rate. It takes 21 days for ships to go from China to America. With the direction these negotiations are headed in, there may not be a deal within that timeframe. China already plans to negatively react to these new tariffs according to some news stories.

Since the close on May 3rd, the Dow is down about 2.6% and the Russell 2000 is down 2.7%. That doesn’t indicate trade weakness. We used this metric because the Dow contains international industrials affected by trade and the Russell 2000 contains small caps, which aren’t as affected by trade. The SOXX semiconductor ETF signals trade is an issue as it is down 5.92%. That’s much worse than the S&P 500’s decline of 2.5%. Emerson stock also signals trade is an issue as it fell 6%.

Emerson Electric’s CEO stated the trade disputes are “something we have to manage. I can’t sit here and cry and hold my breath. I’ve got to deal with them. I still believe we’ll get a deal done. I think the issue really boils to — I think both parties are testing each leader on the give and take.”

As you can see from the chart above, through February 2019, earnings call sentiment on trade was the most negative for consumer discretionary, industrials, tech, and materials. It was the least negative for consumer staples and energy. One thing to keep in mind with the trade war’s effect on the market is it was performing well until now; there are corrections almost every year. Specifically, in the past 40 years, 38 have had declines of at least 5%. There haven’t been any in 2019.

In a previous article, we mentioned a full blown trade war between America and China could hurt global GDP growth by 45 basis points. With the global economy already facing cyclical headwinds, this could be a fatal blow to the expansion. The chart below shows Oxford Economics’ estimate of the effect of U.S. China tariffs of 25%.

As you can see, the effect on real GDP growth in 2020 could be 0.3% in America, 0.8% in China, and 0.3% globally. China’s economy has seen a modest pickup recently because of its stimulus. That might not save its economy next year. It’s possible China wants to wait out President Trump’s presidency which could end in less than 2 years. However, Senate Minority leader Chuck Schumer tweeted in support of the President. Schumer is a key Democratic leader. This trade war may not end if Trump isn’t re-elected. On the other side, Trump is motivated to get a deal done so he can use it to run on in his re-election bid.

Where Tariffs Will Hit

As you can see from the chart below, the new tariffs, which is tranche 3, will hit consumer goods which is obviously a negative because the consumer drives about 2/3rds of U.S. economic growth.

The final tranche of tariffs, which could be announced in the next few weeks if the negotiations continue to go poorly, is mostly consumer goods.

Too Much For Chinese Firms

The chart below shows most listed Chinese firms have profit margins below 25% which means the tariffs could destroy their businesses. Just like how China switched to Brazilian soybeans, American firms will need to switch to cheaper alternatives with this new tariff rate.

As we mentioned in a previous article, the market is in a tough position because it is overbought, the positive catalyst that is earnings season is over, the trade war is getting worse, and economic reports are coming in soft. This is far from a disaster, however, as there is at least a 5% correction almost every year. The trade war isn’t the main catalyst of a potential global recession as the global economy isn’t in good shape for cyclical reasons.