This Stat May Make You Rethink The Economic Recovery 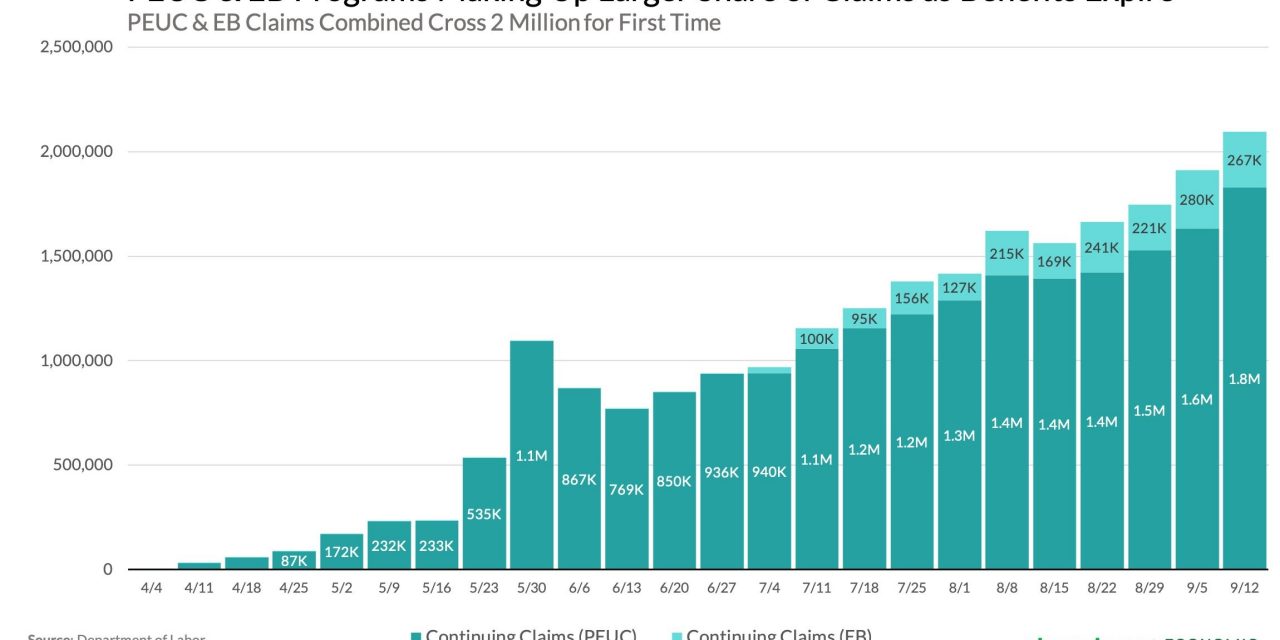 Before we get into the details of the jobless claims report, remember that California’s data didn’t update because the state didn’t accept unemployment claims. That will be the same for next week. Technically, you can argue claims will be higher than normal in these 2 reports because the labor market is improving, but California’s data is stuck. It will be interesting to see how much of a backlog forms as a result of not accepting people. There might be an increase in claims in California in the first week the state starts accepting claim applicants again.

The rate of decline in initial claims has come down which makes sense because it’s much closer to approaching normalcy than continued claims. For example, in the last recession, NSA initial claims peaked at 957,000 and they started the expansion (in 2009) at 581,000. We are now below that peak and nearing the start of the last expansion. On the other hand, SA continued claims are now at 11.767 million which is almost double the previous recession peak of 6.635 million (also the last week of the recession). The last recovery started the moment continued claims started falling. If that’s the case, this expansion started mid-May. This recession lasted a few weeks, but it packed a powerful punch.

PUA jobless claims rose from 616,000 to 650,000. Because of that increase, when combined with initial claims, the total had no change from the prior week as the chart above shows. Because California and Arizona likely have many inaccuracies and represent a large portion of PUAs, it’s a flawed data point. California’s PUAs couldn’t fall this week because the data wasn’t updated. Maybe, when the data is updated in 2 weeks, we will see PUAs fall in the state. Arizona had a 15,468 increase in PUAs which brought it to 220,156 which doesn’t make any sense given its small population. Arizona’s increase represented almost half of the weekly rise. Furthermore, the state represents 34% of total national PUAs even though it only has 2.2% of the population. That’s why we can’t take the PUA numbers at face value.

Continued claims fell 980,000 in the week of September 19th. They were down from 12.747 million to 11.767 million. That was the biggest weekly decline since the third week of August. Keep in mind, some people are starting to exhaust their unemployment benefits because they last 26 weeks. People are being transferred to pandemic claims and extended benefits.

The chart above shows the endless spike in continued claims via those two programs. Their total exceeded 2 million for the first time. This shows the ugly underbelly of the COVID-19 economy in which some industries haven’t made it in the new economy where social distancing is important. We can’t have a fully viable economy until COVID-19 is vanquished. Keep in mind that PUA and PEUC benefits expire in December which means there will be a wave of millions of people losing their benefits if a stimulus which extends those benefits isn’t passed. We are still awaiting Abbott’s new rapid tests to be fully deployed to help limit the spread and open the hardest hit areas of the economy.

Treasury Secretary Mnuchin and House Speaker Pelosi have been trying to negotiate a stimulus plan. The President testing positive for COVID-19 definitely changes the dynamics of the negotiations. The House passed a $2.2 trillion spending package, but that plan likely won’t pass the Senate – it’s pure theater.

The best economic stimulus would be a vaccine, better treatment, and better testing for COVID-19. Until we have that, the bottom quarter of the population is going to be in rough shape. The previous stimulus was the timeliest, most successful fiscal spending plan in American history. That doesn’t mean the government can back away from the problem now.

As you can see from the charts above, COVID-19 caused the lowest earnings workers to take the biggest hit in terms of job losses. In the 1990 recession, low wage jobs actually outperformed; in the following two recessions, low wage workers only moderately underperformed. This recession is different because the leisure and hospitality industry has been hurt by the virus the most and it employs the lowest wage workers.

The August PCE report showed the damage from the decline in unemployment benefits. As you can see from the chart below, the decline in benefits wasn’t even close to the increase in compensation. Furthermore, compensation growth was the lowest in 4 months. Compensation is more sustainable, but it can’t save the economy in the near term because so many people can’t go back to work normally.

This weakness in benefits and compensation caused personal income to fall 2.7% and disposable income to fall 3.2%. However, spending actually increased 1% because the savings rate declined. This is likely because many upper income people were more comfortable with spending money. The savings rate fell from 17.7% to 14.1%. We doubt many low income people have enough extra money to save that much. That being said, they probably did save less than July because of the decline in benefits.

The unemployment claims report was good in that NSA claims fell. Don’t be fooled into thinking we are out of the woods though as continued claims are almost double the peak in the last recession. Furthermore, if you include pandemic programs and extended benefits, the total is more than double the peak in the 2007-09 recession. The COVID-19 recession has hurt low income jobs the most. That’s why we need a stimulus so desperately. The August PCE report wasn’t great because the decline in benefits sunk incomes. Spending can’t grow this much faster than income for much longer. The savings rate dropped severely, but it’s still historically high.