This Rally Is Justified In Both Markets & Housing? 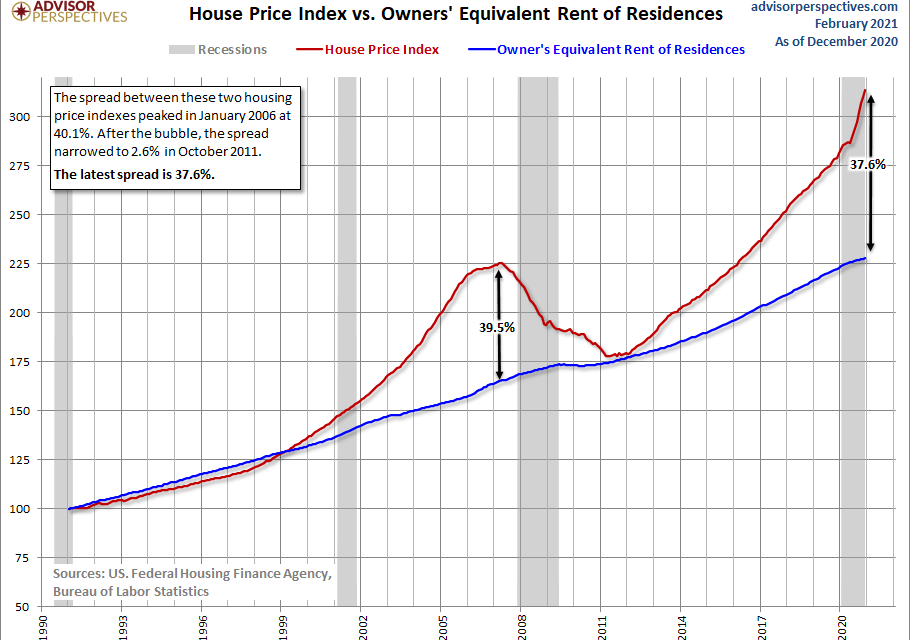 The stock market has had a great 2021 even though it entered the year more expensive than average. The market isn’t in an “everything bubble” even after the rally. There are opportunities to make money in the companies that will benefit from the reopening. Furthermore, we have seen strong S&P 500 EPS revisions. As you can see from the chart below, since June 2020 EPS estimates have risen about 7% which is the exact opposite of what usually happens. They usually fall about 5% in this period prior to reporting results. Estimates have only risen historically coming out of recessions and after the Trump tax cut.

Estimates are always beaten, but the past three quarters were much better than usual. It will be interesting to see how Q2 2021 turns out because expectations are heightened. Analysts expect 45.25% growth. Q4 2020 EPS already was a record for a quarter. Furthermore, the rate of estimate increases is actually going up. In this past quarter, Q1 EPS estimates have risen 2.57%. The 3 year average is a 2.92% decline. Energy estimates increased *185.81%*.

It’s clear energy earnings growth will be in the triple digits because of weak comps and higher oil prices. The biggest question is how much the internet companies are hurt by a return to normalcy. The big tech firms earn way more than the entire energy sector. If they see weakness, the market could correct. We are in an interesting market because six months ago the stay at home stocks did well which brought up the index. Now, the reopening stocks are doing well which is also boosting the index. It’s has been a win-win market for passive investors. We aren’t saying this won’t continue. It’s just that usually transitions aren’t this smooth.

We think home price growth needs to cool off, but we aren’t in a housing bubble. When these high growth rates are comped, yearly growth will fall. Furthermore, an increase in interest rates will make these high prices less affordable. Finally, there was a housing craze during the pandemic caused by people moving to the suburbs. That has likely run its course now that we are extremely close to the end of the pandemic.

The December FHFA home price index was up 1.1% monthly which was on top of 1% growth last month. It beat estimates by 3 tenths and the highest estimate by 1 tenth. Yearly growth was 11.4% which increased from 11.1%. Home prices can’t grow at a double digit pace indefinitely. It’s almost certain that the FHFA index will be up much less in December 2021.

As you can see from the chart above, the rampant increase in the FHFA index has put it 37.4% above the owner’s equivalent rent index. It was 39.5% above the owner’s equivalent rent index at the peak of the housing bubble. We should see higher rent inflation coming out of the pandemic and less single family house price increase. People will move back to the city after the pandemic. It was a major mistake to buy a house just due to the pandemic because the rule of thumb is to buy a house only when you plan to live in it for 7 years or longer.

Every City Has House Price Growth

Similarly, the Case Shiller home price index rallied enormously in December. The 20 city monthly adjusted growth rate was 1.3% which beat estimates by 3 tenths and the highest estimate by 1 tenth. Yearly unadjusted growth was 10.1% which was up a full point from last month. The hottest city is Phoenix which finally reached a new record high in housing prices for the first time in over 14 years.

Phoenix had 13.8% yearly growth and 30.1% growth in 3 years. Seattle has re-accelerated as its yearly price growth was 12.7%. Amazingly, the weakest growth was 6.9%. That’s even high! Las Vegas had such weak growth because tourism is still low. It should rebound in the next few months. Las Vegas is the furthest from its record high as it is down 10.4% from peak prices 179 months ago. As you can see from the chart below, 100% of cities had housing prices growth. The 3 month average has almost always been at 100% since the recovery gained pace in late 2012.

There Is No Bubble

There is no formal definition of a bubble. That’s why recent central bankers have been hesitant to use it. That, along with the fact that it’s a controversial opinion to make even if it’s on cryptocurrencies which aren’t systemically important. We pose that housing isn’t in a bubble even though we think recent price growth is unsustainable. That’s because there isn’t euphoric buying from unqualified buyers like in the late 2000s. Furthermore, there is actually a housing shortage rather than a glut.

As you can see from the chart below, the months of single family inventory skyrocketed in 2006 and 2007 as the housing market was peaking. 2020 and early 2021 is much different as there is record low inventory. It’s highly probable that higher prices and rates cause sales to fall and higher prices eventually increase supply. However, that will only normalize inventory. It won’t put the market in a downward spiral like it was in from 2008 to 2010. It’s worth mentioning that housing is getting much more expensive to build due to the spike in raw materials such as lumber and copper. This is why it’s no longer the perfect environment for home builders.

Earnings estimate revisions have been very strong. They are powering the market higher. That’s why we don’t think this is an overall bubble. There is only a bubble in specific areas of the market which are usually popular with retail investors. The housing market is doing very well. Home price growth won’t stay at this level, but there isn’t a bubble because there is a supply shortage of houses and the buyers are well qualified. This is nothing like the late 2000s.