This Is How Many Jobs Could Have Been Created In September 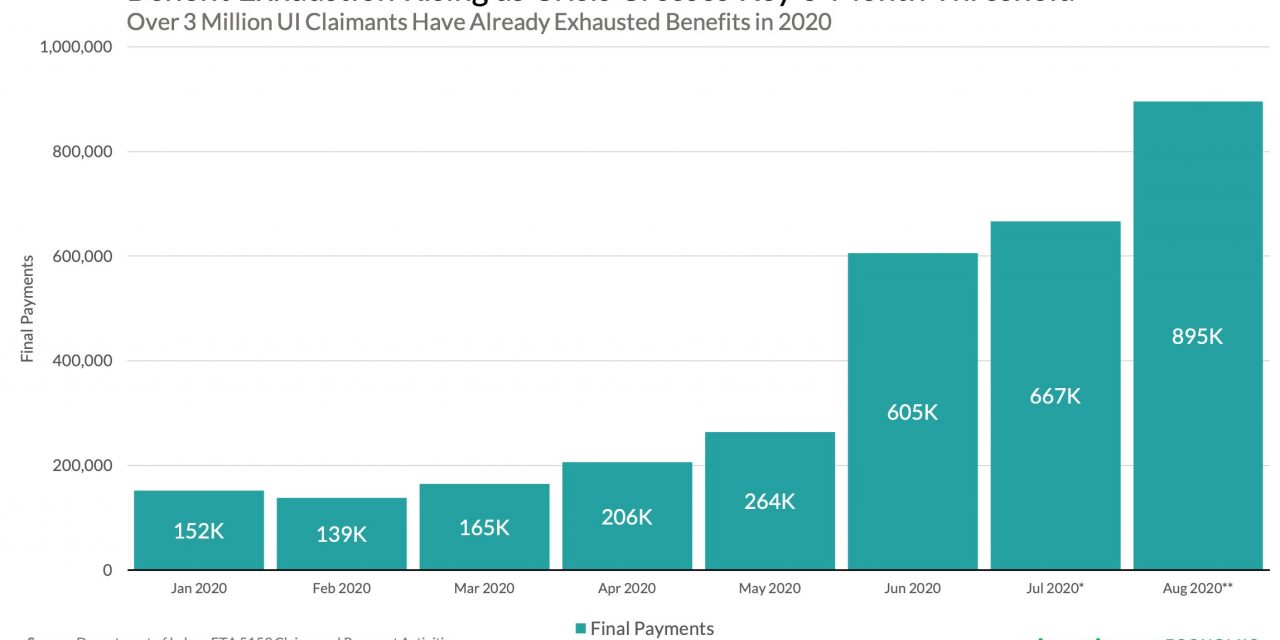 The economy is potentially on the precipice of a sharp spike higher if we get a stimulus, increased rapid testing, and positive results on treatments/vaccines in October. As for now, we have an uneven recovery where the leisure and hospitality industry is still struggling. Labor market growth will be hampered until the economy can fully reopen.

In the week of September 19th there were 870,000 seasonally adjusted initial jobless claims which was up 4,000 from the prior week. That was 10,000 below expectations. This is seasonally a weak time for the labor market which is why non-seasonally adjusted claims rose more than seasonally adjusted claims. NSA claims were up from 796,000 to 825,000 which is still below where they were 2 weeks ago. It seems like initial claims are plateauing; small restaurants are still struggling because of the economic restrictions in certain cities (NYC in particular).

NSA initial claims and PUAs combined fell 1% because of the decline in PUAs. PUAs were down 45,000 to 630,000. That’s the lowest total in 4 weeks. PUAs in California have normalized as the fraud and data issues are being fixed. Arizona’s data is still too high as there were 204,499 initial PUA claims. That’s about 1/3rd of the total even though Arizona has a population of 7.3 million which is 2.2% of the country.

Continued claims fell from 12.747 million to 12.58 million in the prior week. That was the BLS survey week. Claims from survey week to survey week fell 2.9 million in August and 1.6 million in September, signaling a slowdown in job creation. As you can see from the chart below, high frequency data from Homebase suggests there will be 600,000 jobs created in September. That report will come out on October 2nd.

The next 2 weeks of jobless claims need to have an asterisk next to them because California is not accepting unemployment claims to improve its process. California accounts for 28% of initial claims. More of the fraud and data errors might be wiped away and maybe people will get their claims filed quicker afterwards. In the meantime, this will hurt the newly unemployed. This could have a minor impact on national spending.

Continued Claims About To Be Exhausted

Millions of people getting benefits are about to exhaust them as the program lasts 26 weeks and the recession started about 26 weeks ago. This will cause normal continued claims to fall, but that obviously should be taken lightly because of the people running out of benefits. This is unlike any other recession because almost all the job losses happened in a few weeks. As you can see from the chart below, 895,000 claims exhausted their benefits in August. That will rise sharply in September and October.

The exhausted claims are going to shift to pandemic programs and state extended benefits which is important because people still need the money to survive. You can’t just ignore these people and say the labor market is back to normal when millions leave regular continued claims in October.

PUA and PEUC claims expire in December. At least that gives the economy a couple more months to get back to normal. Since there will be so much data on vaccines and treatments released in October, we could be looking at a much improved labor market by the end of the year as businesses anticipate a return to normalcy. Keep in mind, the pandemic programs and normal benefits could be impacted by a future stimulus.

The Democrats are about to unveil a $2.4 trillion stimulus which is about $1 trillion less than their plan in August that didn’t get accepted by the White House. With the Dems willing to negotiate and Congress passing a bill to fund the government about a week before the deadline (rare for Congress lately), the odds of a stimulus passing are increasing. Unfortunately, it took about a 10% correction in the stock market to motivate Congress. You can look at the IWN small cap value index to see if a bill will pass. If that index rallies, it means investors see an increased likelihood of a bill passing. The market will price it in before it actually passes and way before it impacts the economy.

Low Wage Workers Hurt The Most

We already know the low wage workers without high levels of education were hit the hardest by this recession because most can’t work from home. That’s why this pandemic needs to be ended. As you can see from the chart below, those making less than $16 per hour haven’t seen nearly the employment recovery that higher wage workers have seen.

Going from an average of 761 deaths per day down to where the economy can fully reopen will be huge for leisure and hospitality. The good news is sports plan to have fans in the stands in 2021 which means more workers at the stadiums. Furthermore, Indiana went into stage 5 of its reopening plan which allowed for the full capacity of restaurants, bars, conventions, sporting events, fairs, and festivals.

Palantir is the latest IPO set to occur. It plans to do a direct listing on September 29th. This adds to the supply of SaaS companies, which will limit the industry’s equity price momentum. It’s basic supply and demand that you learn in economics 101. The NAAIM investor exposure index fell 4 points to 55.3 which is normal. The deviation was 82.7 which is the highest since 2008 and the 2nd highest ever. Investors are all over the map on where they see stocks going because we have a tech bubble, a stimulus being debated, a presidential election, and a pandemic with treatments/vaccines results to be released in October.

The initial unemployment claims report wasn’t great, but there could have been 600,000 jobs added in September and there could be a stimulus passed in the next 1.5 weeks before Congress goes on recess. The 26 weeks people go on continued claims is about to end because the recession started about 6 months ago. Low wage employment was hurt the most by this recession. The NAAIM index shows extremely high deviation in exposure.