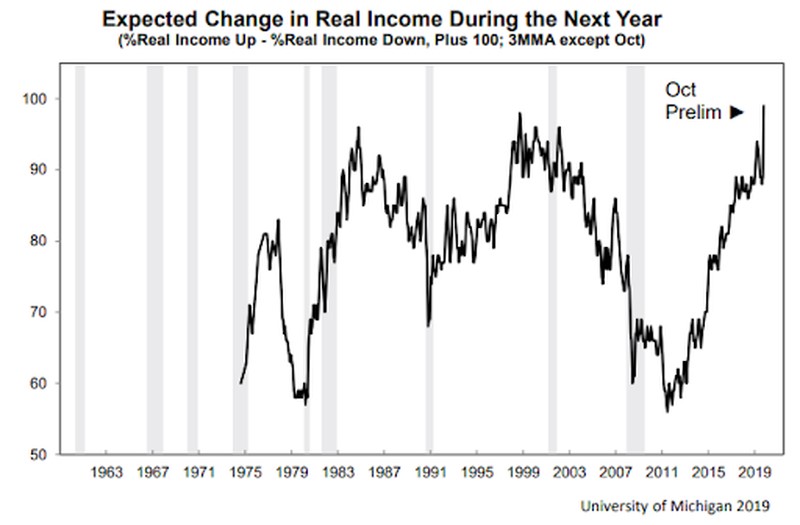 The August University of Michigan consumer confidence report was highly discussed because it showed a big decline in confidence. It caused some to think the trade war was significantly hurting consumer spending. We now have the benefit of hindsight which tells us retail sales growth improved, but PCE growth didn’t. In the subsequent two months of University of Michigan reports, confidence has improved even though new tariffs were added and the trade war got worse. The preliminary October reading we are about to discuss doesn’t include any data measuring confidence after the announcement that phase one of the trade deal with China would be worked on. That modestly optimistic news could further help confidence.

The October reading didn’t show a huge improvement in confidence, but the fact that it showed any improvement was a surprise given the worsening trade war. While they aren’t big impacts, it wouldn’t have been irrational to expect negative effects from the impeachment proceedings and GM strikes. Economists were proven wrong as the overall index increased from 93.2 to 96 which beat estimates for 92 and the high end of the estimate range which was 93.7. Very few economists saw an increase coming. As you can see from the bottom chart below, this was the largest positive surprise since 2013. It appears to be the 3rd biggest surprise in the 21st century.

Specifically, the current conditions index increased from 108.5 to 113.4 and the expectations index increased from 83.4 to 84.8. The expectations index was down 5% from last year, but it’s still relatively strong. The trade war was slightly less of an issue than in September. The percentage of negative mentions of the trade war fell from 36% to 29%. The latest round of tariffs didn’t seem to cause more people to care about them. Maybe consumers are reacting to overall inflation instead of the specific goods affected by the tariffs. Overall inflation isn’t a problem as CPI was just 1.7% in September.

Inflation is expected to be low and nominal wage growth is expected to be high. This explains the chart below which shows the net percentage of consumers expecting their real incomes to rise in the next year reached the highest point in 20 years.

In September, average weekly wage growth was 2.6% which is higher than inflation. Real wage growth has been strong this year especially for production and non-supervisory workers. It shouldn’t be a shock that consumers care more about real incomes than news about the trade war, politics, or the GM strike.

The GM strike was negatively mentioned by 5% of people. Investors worry the GM strike signals a recession is coming based on the timing of the strikes in the last two cycles. It’s logical for there to be a strike at the end of the cycle because it’s when sales dwindle, but wage growth is strong. Workers want a competitive wage, but GM can’t pay up because sales are starting to weaken. At most, this is a negative signal. It’s not big enough to catalyze a recession.

No Recession, Slowdown Not As Bad As 2016

It’s critical to see if this slowdown is worse than the one from 2015-2016, because if it is, the economy is very close to a recession. As you can see from the chart below, the weekly activity index suggests it isn’t as bad.

Growth in yearly real GDP percentage points is about 2.25%. It bottomed at about 1.4% in early 2016. Growth is significantly below its peak of about 3% in 2018. We like this index because it’s open about what’s in it. The caption below the chart gives the details in fine print. If you think its growth rate will fall further, try to pick out which segments you see worsening.

Because comparisons got easier, the ECRI leading index’s growth rate improved from 0.8% to 1.1% even though the index fell from 146.1 to 145.4. As you can see from the chart below, comps are about to get easier.

The weak growth in the fall of last year predicted the current slowdown. On October 18th, the September coincident index should be updated. It’ll tell us more about how close this slowdown is to the 2016 trough.

The University of Michigan consumer confidence index improved in October because less consumers were worried about the trade war. This might imply an improvement in real PCE growth is coming. That would be great for GDP growth which is likely going to struggle in Q3 as the consensus sees 1.7% growth. Consumers are very optimistic about real income growth. The Redbook same store sales growth weakness in department stores versus discount stores is disconcerting.