These Are The Stocks That Won In The Past Decade 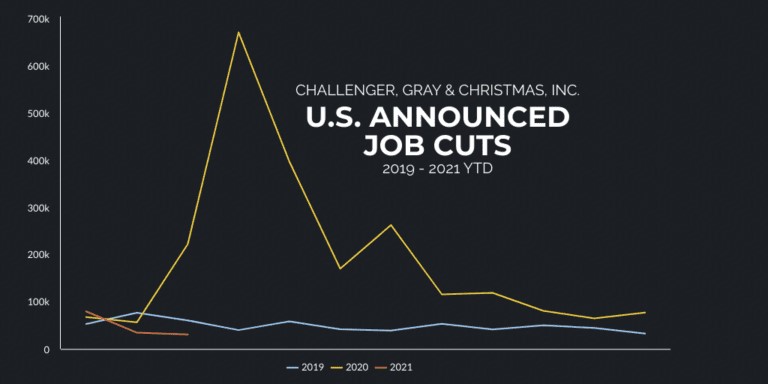 The number of job cuts in March fell again. As you can see from the chart below, they are even below where they were in 2019. It’s only a matter of time until the labor market becomes as full as it was in 2019. Cut announcements fell 11% from 34,531 to 30,603. Washington state had the highest year to date layoff announcements as they totaled 35,907. That’s much higher than 2nd place Texas which had 24,300.

The telecommunications industry had the most cuts in March as there were 5,155 announcements. There were only 1,987 cut announcements due to a demand downturn. Demand is skyrocketing. That’s no longer an issue. For context, there were 37,121 cuts for that reason in the first 2 months of 2021. 12,356 of the cuts in March were due to market conditions which is a vague category. That’s what you say when you don’t have a great reason. When would market conditions not be the reason for layoffs?

The worst part of this report was that there were only 97,767 hiring announcements which was down from 146,403. That stat isn’t correlated with the BLS readings though. There were 929,860 hires in September which was the highest of 2020. September didn’t have anywhere close to the highest job creation last year according to the BLS. Announcements might cause a delayed reaction, but it’s not like the months following September had fantastic BLS readings either. The leisure and entertainment industry had the most hires at 25,035 in March.

Peak ISM: Soak It Up

The ISM manufacturing PMI rose from 60.8 to 64.7 which was a 37 year high. This is probably the cyclical peak in the diffusion index. However, just because this is the peak doesn’t mean this is the peak in industrial production. It’s simply that the ISM survey asks businesses how they are doing compared to last month. It’s doubtful this percentage of businesses will say business got better in the next few months. How could they? The comps will be much tougher.

This was a spectacular report which is ironically bad for stocks because high readings occur at business cycle peaks when stocks have already ramped. Sure enough, the prior 6 month rally in the Russell 2000 already priced in this great report. To be clear, since the recovery has more room to go, we aren’t saying stocks have peaked. We’re saying they are very unlikely to increase at the same rate as they have in the past few months, unless there are new catalysts of course.

As you can see from the chart above, the prices index is still insanely high as it’s at 85.6. No commodities were down in price. Tons of commodities were in short supply such as corrugated boxes, semiconductors, and steel. The winter storm hurt the supply chain. 0.5% of respondents said prices were lower. 71.6% said prices were higher. A machinery company stated, “Widespread supply chain issues. Suppliers are struggling to manage demand and capacity in the face of chronic logistics and labor issues. No end in sight.”

Not A Housing Bubble

The chart below shows the home price to rent ratio. It includes the next few months if they stay at the current pace which they probably won’t.

This ratio looks exactly like the housing bubble in the early 2000s. However, this is the inverse. Last time, housing prices were too high. Now, rents are too low. There won’t be a crash in the housing market. Instead, there will be a spike in rents. This will add to the inflation that we are seeing in the ISM report. This summer will have very high CPI readings.

The Winners Come From Small Caps

Most investors looking for compounders are trying to find the small percentage of winners that will generate returns in excess of 20% per year. In truth, if you want to beat the market and compound your wealth, you can’t buy the winners of the past that have become $500+ billion businesses. It’s not possible for the FAANG stocks to destroy the market because they are the market.

As you can see from the table below, of the stocks with the highest compound annual returns in the past 10 years, most had market caps below $10 billion at the start. That probably equates to about $30 billion in today’s market cap.

Keep in mind, we are in a period with a lot of centralization. If the market becomes less centralized over the next 10 years, larger companies might even do worse. It’s very difficult to compound at over 20% per year when you have a market cap of $100 billion or more.

Our prediction that the latest round of checks wouldn’t enter the stock market like the prior two rounds was correct. As you can see from the chart below, the retail model portfolio has underperformed in the past few months in spite of the checks. That’s because new retail investors can spend the money in the real economy. There is intense desire to go out and live life normally. Travel is quickly normalizing.

SPACs haven’t been doing as well this year as they were in the 2nd half of 2020. That’s because supply is overwhelming demand like we predicted. As you can see from the chart below, there are hundreds of intended SPACs coming. This will be a tidal wave that completely ends the SPAC mania for years to come.

There aren’t many job cut announcements anymore because demand has come back. It’s rare for a business to want to lay off workers. Workers are becoming a hot commodity. Wage inflation should start to increase for low education workers. The composition effect will lower wage growth, but individual industries with tight labor markets will hike pay. This is likely the peak in the ISM PMI, but industrial production will has room to increase further. Rent inflation is going to increase in the next few months. Large cap stocks usually don’t compound at a high rate. Mega cap stocks almost never do. The party in the meme stocks and the SPACs is over despite the stimulus checks going out.