The US Is In Secular Economic Decline 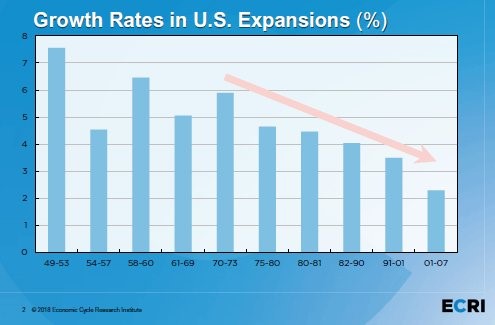 A statement popular in business is “if you’re not growing, you’re dying” (attributed to William Burroughs). It’s a great quote because it shows how quickly a business can fail. Unfortunately, America’s economy is trending in the wrong direction as growth is falling towards the flatline in expansions. If an economy barely grows in expansions, it doesn’t look good for the whole business cycle as recessions will inevitably lead to sharp economic declines.

The chart below shows the average growth rate in U.S. expansions has fallen for 5 cycles in a row.

This current business cycle has had very low growth; it’s only appealing factor is it is the 2nd longest expansion since 1854. The population growth has slowed, but even adjusting for that issue, growth has declined. The U.S. economy has become less dynamic as productivity growth has slowed. Business is dominated by mega-corporations with little room for startups as we discussed in Here’s Why Startups Are Dying In The US and What The Number Of Public Companies Means. That’s a big shift for the US which is built around the ideals of capitalism which encourages both success and failure – you cannot have one without the other.

Where Are The New Companies?

One major issue preventing dynamism is the cost of education. College costs have increased significantly as a function of government backed student loans despite the fact that information is cheaper and more ubiquitous than ever. High college costs mean 20 year olds don’t have the freedom to work at a start-up for little or no pay to start their career. Some may apply for an internship which pays little, but the goal is always economic security because student debt is a source of so much economic insecurity. There’s also a societal shift among young people where they rely on their parents until an older age than previous generations. That shift doesn’t encourage risk taking, moving across state lines, and shifting jobs often which as we detailed previously is the source of being paid competitive wages.

In fact, youth employment is lowest in 20 years as we detailed previously. To make matters worse, the percentage of 20 year olds who switch jobs has been in a secular decline for decades, with millennial’s currently switching jobs the least on a percentage basis compared to previous generations since the 1990s. The older someone is, generally the less risk they take. If parents have more influence and financial responsibilities to bear as a result of young adults being more reliant on them, they’ll take less risk.  The need for economic security, parents pressuring young adults into safer jobs, and less entrepreneurial teens all combine for a less entrepreneurial generation despite entrepreneurship being a popular dream for many.

The charts below detail the effects of a less dynamic country.

The employment share at new companies is declining. That’s occurring simply because new business creation is down. The fact that the percentage of people moving across state lines is falling and the job turnover rate is declining speaks to a population that is more risk averse. We’re not disparaging working as a professional for a big business, but working in a small business or a startup which may not be profitable and can be extremely risky with a high degree of uncertainty of a stable income means that it’s illogical to take such risk with your employment especially when there is significant student debt to be paid off. The problem is if less people take that risk, there’s less innovation and competition in the country. With less innovation and less small business, the standard of living for a majority of the population declines.

Clearly, regulations hurt business creation. That’s the tradeoff in attempting to maintain public health. Regulations increase costs. Every cost to a new business can be the difference between it succeeding and failing. The chart below shows the federal regulations by sector. 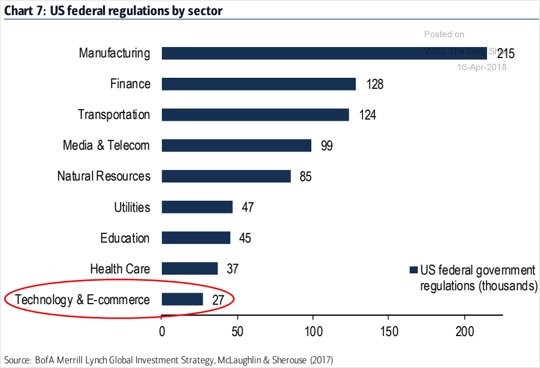 Manufacturing is the most heavily regulated sector. Consequently, manufacturing jobs have left the country for Asia. Countries the jobs are outsourced to are willing to accept lower standards for workers because there aren’t better options for low skilled workers and there’s little opportunity for them to learn a skill. This is why the trade off of lower standards to gain manufacturing jobs makes sense to them. There’s always a call for ‘smarter regulations’ in America, but that’s a fundamental misunderstanding of how government works. There are countless stakeholders who need to be appeased. ‘Smart government’ implies the government can set regulations that help each stakeholder in a personally specific way. That’s not realistic. Therefore, regulations often hurt one party in favor of another.

The interesting part of the chart above is that the technology and e-commerce sector is the least regulated in the group, yet natural monopolies have formed which hurt the ability for a startup to compete. Competing with the top technology firms is incredibly difficult because they spend billions on intellectual property, capex and lobbying the government to set regulations to help them. To be clear, this is not an argument in favor of breaking up tech companies as many suggest. Companies that grow and dominate industries as a consequence of providing great services that are in demand by consumers and businesses is great. The problem becomes when companies attempt to secure market share not by providing better services, but by creating laws that protect their economic moat, thus restricting competition by increasing the barriers to entry.

Because of the internet, it’s easier than ever to create a business, but it’s even harder to earn market share. Some startups in the past operated on inefficiencies which have been eliminated by the internet. For example, 20 years ago there may have been a better product in another city, but there was no way to find out about it nor have it delivered easily without the internet. Now startups must compete on a global scale upon launching which is a difficult task. One example of increased competition is information in the form of content in any industry. It’s very easy to publish information online, however the amount of information being produced has increased so much as a result that it has saturated the market, thus making it harder for this content to be seen despite the reduced barriers to entry.

66% of industries saw an increase in concentration from 1997 to 2012. Obviously, that period includes two big recessions for small businesses. Even though 2001 was a shallow recession, the tech bubble of the late 1990s hurt a lot of new firms. Even though it includes those periods, it’s still worth noting how most industries have centralized.

The chart below shows the number of metro areas out of 336 where the business death rate exceeds the business birth rate. 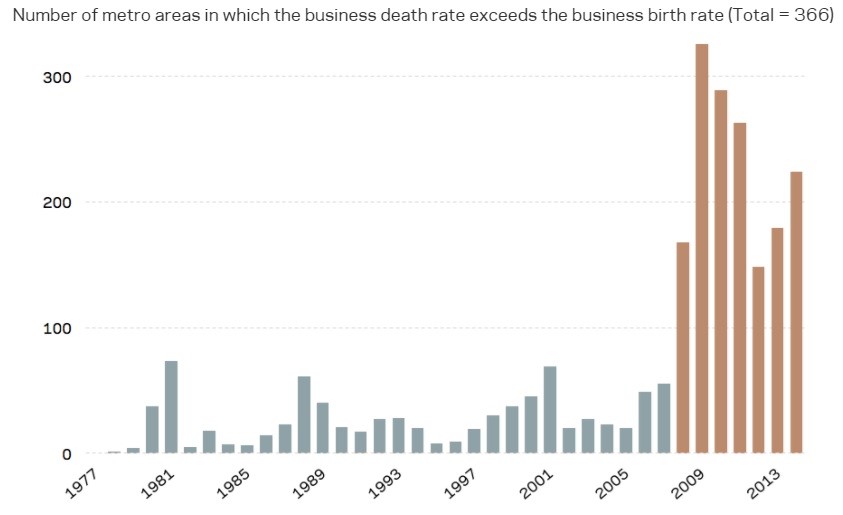 Years after the recession the death rate still exceeds the creation rate for more cities than in the past few decades. This gets back to our first point. If you’re not growing, you’re dying. America’s trend of fewer startups and small businesses is a long-term secular problem which has originated as a result of high student debt which affects both young adults and their parents, a lack of economic stability, and greater barriers to entry in business as a function of more regulations and higher startup costs, despite the internet and technology as a whole being so ubiquitous in the United States.