The Top Internet Stocks Were Disasters 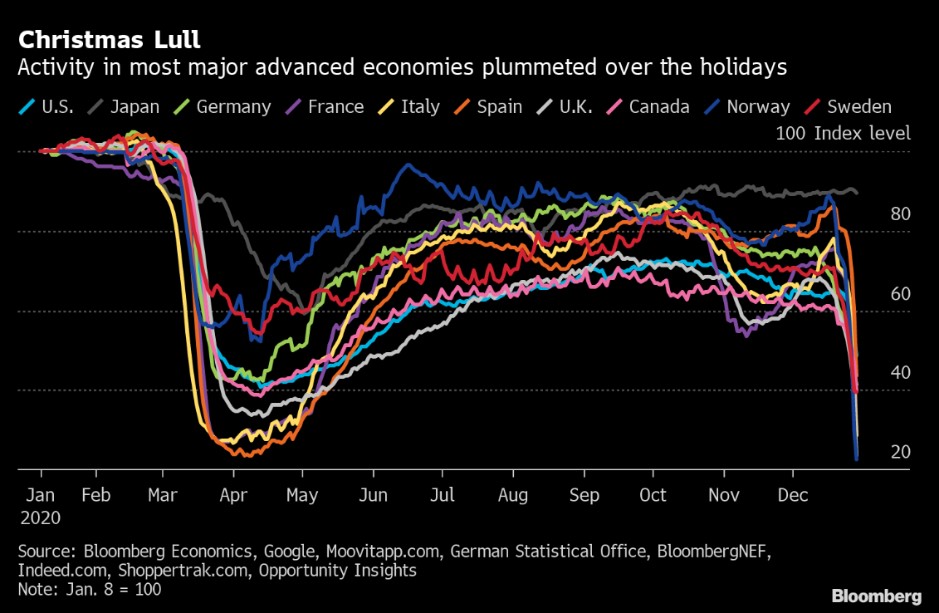 The $900 billion stimulus is here. Further good news is the money will go out quickly. The $600 direct payments started going out on Tuesday evening. Even better news is there won’t be a delay in unemployment benefits. The 14 million people on benefits that could have lost them won’t see any issues. Plus, the 20 million people on unemployment benefits will be getting the extra $300 per week right away. This will help consumer spending in January. To be clear, 11 weeks of benefits won’t be enough to get to the end of this pandemic especially with the slow vaccine distribution at the onset. 11.4 million vaccine doses have been given to the states, but only 2.1 million have been administered.

The bad news is the $2,000 checks (additional $1,400) will not be going out because Mitch McConnell plans to attach unpopular items to this vote because it would be politically treacherous for Senate Republicans to vote on just the stimulus checks. It looks very bad if they vote no, but some of the diehard base doesn’t support the checks. Checks certainly aren’t fiscally conservative.

That’s not to say we oppose the checks. We’re just saying why some might oppose them. The monkey wrench in this situation is the Georgia Senate elections which could shift the balance of power in the Senate to the Dems which would increase the likelihood of another stimulus. The Georgian GOP candidates support the stimulus checks, but what is important is who controls the Senate because McConnell determines what the Senate votes on. He’s extremely powerful.

Our expectation was and still is that this wave of COVID-19 cases won’t tank the U.S. economy like what occurred in the spring. That’s certainly the case with manufacturing data. It seems to be less so the case with the consumer, but with this latest stimulus, the consumer should get some help. That being said, the chart below shows economic activity fell to a standstill around the holidays which could be construed as a good thing because it means the virus didn’t spread any more than it already has been spreading.

However, we’re sure the data will alarm some people. It appears this decline was more holiday related than anything because it’s not as if COVID-19 was dramatically worse during the holidays compared to the week before. Don’t get us wrong, it was a bit worse and it’s not under control in America. We’re just saying activity will bounced back in January. It won’t be back to normal until we reach herd immunity though.

Redbook same store sales growth in the past two weeks has been very good which is confusing because it seems like most consumer data hasn’t been good recently. However, we won’t cover up this data just to keep narrative going. Same store sales growth last week was 6.5% and growth in the week of December 26th was 8.9%. It appears in the weeks leading up to Christmas, spending improved.

We are anxiously awaiting what the retail sales report shows. As you can see from the chart below, department store sales growth has improved rapidly since August, but it’s still at about -20%. It will be interesting to see where it winds up next year because this group has been in a secular decline. Let’s see if this disruption reinvigorates the category or pushes more people permanently online.

The Hot Internet Stocks From 2000

The table below shows some of the top internet stocks from 2000. We are not trying to criticize someone’s picks especially from 20 years ago because no one has a perfect track record. The point here is to keep looking at the late 1990s and 2000 to see what might happen to the current crop of bubble stocks. The results won’t be pretty if they match these. The average pick was down 68.64% in 2000 alone. This is what can happen to the hot stocks and cryptocurrencies in 2021 if sentiment shifts. There are only two options. Either the bubble accelerates at an even faster clip or it implodes. There is very little chance we see a permanently high plateau.

As you can see, these stocks went on to have even worse returns in the following two decades with Verisign being the notable exception. Successful firms like Intel and Verisign still didn’t regain all their losses. Those who only look at Microsoft are guilty of survivorship bias. Disruption bulls believe the 1990s investments sowed the seeds of the current boom. While that is true, let’s not ignore all the people who were wiped out from the speculation. Investors in internet stocks today forget about that, probably because some weren’t even alive then.

There is a lot of talk about trying to find stocks that will 10x because people have recency bias as there have been many huge winners in 2020 since March. With that being said, let’s look at the slide below which measures where the gains came from in the biggest winners of the past 5 years.

The median stock had no gains via dividends, 65.71% via multiple expansion, and 33.65% via EBITDA growth. In fact, 23% of firms diluted shareholders by more than 50%. This shows the regime we have been in. No wonder investors in 2020 love dilution and growth and don’t care about valuations. 5 years sounds like a long time, but this is just the cycle we are in. It will look a lot different in the next 5 years.

The stimulus passed, but the $2,000 checks aren’t coming unless the Dems win both Senate seats in Georgia on January 5th. The latest polls are within the margin of error. The high frequency economic data shows mobility tanked over the holiday. Redbook same store sale growth has spiked in the past 2 weeks. The top 10 hottest internet names in the 1990s crashed in 2000. All except one have done terribly since then. In the past 5 years, the biggest winners diluted shareholders and experienced a lot of multiple expansion. Momentum drove the winners to great heights.