The Tail Wags The Dog 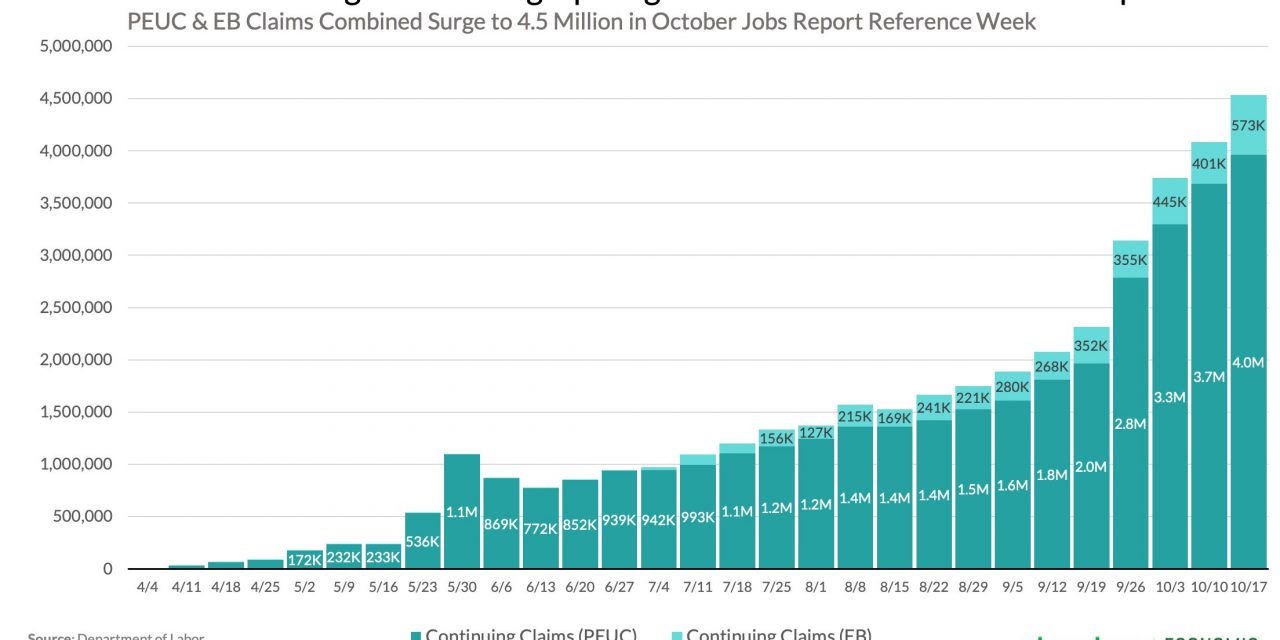 The stock market had a great four day rally in early November because election related hedges were unwound. It’s amazing to see stocks rise on the worst case scenario playing out. We were told an uncertain election was the scenario investors feared yet stocks went up anyway. The Nasdaq 100 rose a massive 9.3% in 4 days. That’s a good year’s worth of returns in less than a week. As you can see from the chart below, the options market’s volume is greater than the stock market’s volume which means the tail wags the dog often. This rally isn’t even about extreme optimism. It’s just market dynamics playing out. Normally, long term investors don’t care, but this was such a large move, it’s worth mentioning.

In the case of the big tech stocks, which rose the most, they liked the possibility of the GOP potentially winning the Senate because there is less of a chance of fines and regulations. However, that’s too simplistic. The GOP and the Dems both don’t like big tech; it’s just for different reasons. There is also still a possibility the Dems win the Senate after all. Furthermore, the GOP winning the Senate means there’s less of a chance of a capital gains tax hike which would have caused forced selling in the biggest winners (tech) to get out ahead of the tax increase.

The other good news for tech was the potential for lower inflation because the Dems favored a bigger stimulus. Without the blue wave, we won’t get an inflation causing big stimulus. There will still be some fiscal support though. The regional banks had their worst day versus the market ever on Wednesday and they rallied over 4% on Thursday. This shows how crazy the factor movement became. Don’t take short term moves at face value even if they are huge.

This was an okay jobless claims report, making it slightly worse than the recent good ones. Continued claims fell more than the total of PEUCs and extended benefits rose; non-seasonally adjusted initial claims fell. That sounds great but continued claims didn’t fall that much more than those benefits programs. Plus, initial claims only slightly fell.

Seasonally adjusted initial claims in the week of October 31st fell from 758,000 to 751,000. However, last week’s original reading before the revision was 751,000 which means claims were the same as what we thought they were last week. Non-seasonally adjusted claims fell from 738,709 to 738,166 as the chart below shows. The cycle low is still the week of October 3rd which was 731,249.

The combination of initial claims and PUAs stayed the same as PUAs were up 4,000 to 363,000. The PUA data is inaccurate. Nevada had a major increase in the prior reading last week and only fell 7,085 this week. Nevada has 14% of PUAs even though it only has less than 1% of country’s population. Nevada’s unemployment rate is 12.6% which is high because it relies on hotels in Las Vegas. However, it’s not 14 times as bad as the rest of the country. The PUA data is simply unreliable.

As you can see from the chart above, PEUC claims were up 277,564 and extended benefits were up 172,123. There was a 601,929 decline in continued claims which means the labor market improved adjusting for people’s normal benefits expiring. Since COVID-19 is getting worse in November we could see another wave of layoffs. We didn’t see a wave of layoffs in the summer COVID-19 spike, but we might not be so lucky this winter if hospitalizations surpass the summer peak. They are now at 53,322; the peak in the summer was about 60,000. Even if there aren’t shutdowns, the economy will slow.

The good news is Challenger job cuts fell from 118,804 in September to 80,666 in October which was a 32% decline. We’ve seen a high volume of social media posts showing the economy getting worse because of a few highlighted job cut announcements. Have some faith in the official data over a few headlines cobbled together. This isn’t to say we won’t see a rise in November. It’s just that the data was fine in October. It was still up 60.4% from last year, but when you consider that year to date cuts are up 320%, that doesn’t sound bad.

No Parties For Inning One

On an adjusted basis, continued claims fell 538,000 in the week of October 24th which was less than the 649,000 decline in the prior week. This is the smallest decline since September 12th even though millions of benefits expired this month (the recession was at its worst 6 months ago). This is the 4th straight week of smaller declines in continued claims.

There are now 7.285 million continued claims. The peak last cycle was 6.635 million. We should get below that level in a few weeks. However, there is no party for getting to the start of a recovery. We need to see COVID-19 resolved with a vaccine or treatment before the labor market has any semblance of normalcy. If there is a vaccine released by the end of the year, we will see thousands of people in the leisure and hospitality industry go back to work within a few months. The labor participation rate will increase nicely at that point.

There has been a lot of unusual market action in the first week of November because election related hedges came off. The options market’s volume is greater than that of the equities market. The jobless claims report was simply okay. You can call that a minor win since the virus is spreading rapidly. Job cuts actually fell a lot despite the negative news posted on social media. Continued claims are on the precipice of getting to the peak of the last recession. We won’t declare victory until COVID-19 is resolved enough to fully bring back the leisure and hospitality industry.