The Source Of The Speculative Bubble 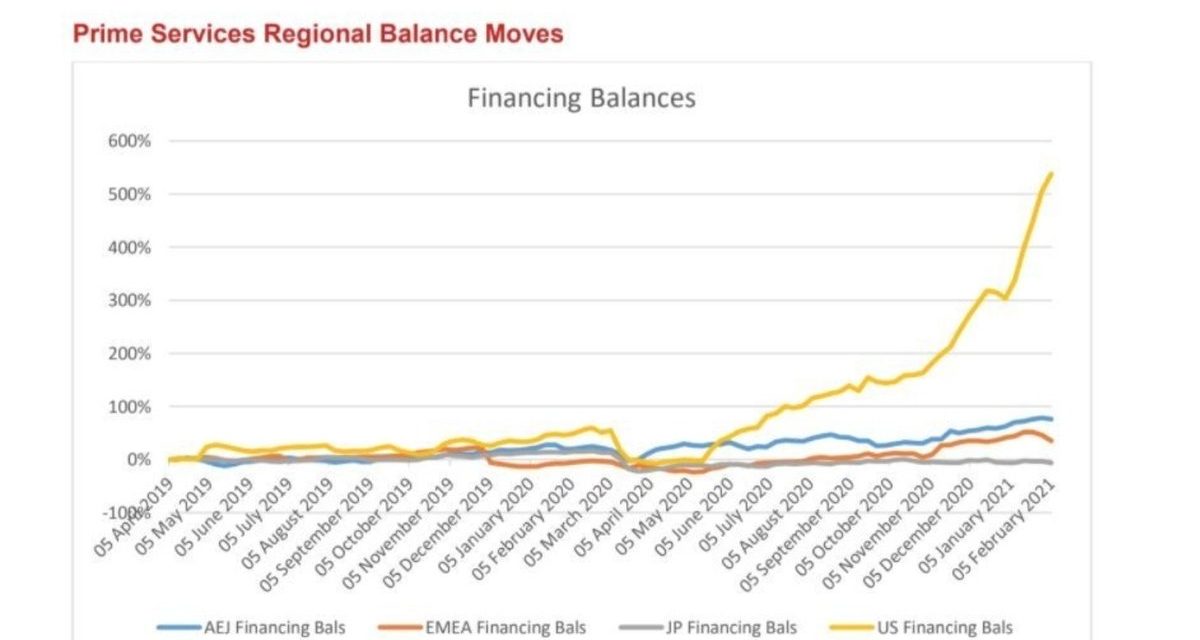 The ADP report showed 517,000 private sector jobs were added in March which beat estimates for 500,000. It’s interesting that even though this was a beat, it was framed as a soft reading because some are calling for over 1 million jobs added in the BLS report. The consensus calls for 538,000 private sector jobs added. Clearly, the ‘whisper number’ is higher than the consensus.

Don’t focus too much on one reading. We don’t know whether the labor market recovery will start in earnest in March or April. It doesn’t really matter. All that matters is that the rate of improvement keeps up. This ADP report supports the point that the labor market is adding more jobs than prior months. Job creation is accelerating. As you can see from the chart below, the ADP reading shows employment is 6.97% off its record high. Let’s see what the BLS reading shows on Friday. It might be a little closer to its record.

Job creation was evenly distributed by company size. Small firms added 174,000 jobs, mid-sized firms added 188,000 jobs, and large firms added 155,000 jobs. The goods producing sector added 80,000 jobs. Natural resources and mining lost 1,000 jobs in spite of the improvement in the energy markets. There hasn’t been a large enough spike in oil prices to see a hiring surge. The construction industry added 32,000 jobs because the residential housing market is on fire. Manufacturing added 49,000 jobs which is in line with the very strong regional Fed reports. It will be interesting to see how strong industrial production ends up being. We could be close to as good as it gets in the cycle for the diffusion indexes.

The service sector added 437,000 jobs. The trade, transportation, and utilities industry added 92,000 jobs. The leisure and hospitality industry added 169,000 jobs which was the highest in this report. That’s actually lower than we expect for the BLS report. Some say the ADP reading is more accurate in surveying restaurants. In the past year, the ADP report has been very wrong most of the time. This report is slowly fading into becoming a non-factor. It’s an educated NFP (non-farm payrolls) guess.

If someone would have told you that there would be a pandemic that caused millions of job losses, but personal bankruptcies would fall, you wouldn’t have believed it. This unbelievable event is real life. Personal bankruptcies fell in 2020 and are falling again this year. In fact, personal bankruptcies are about half of what they were in 2019. This type of information allows us to start wondering out loud if the federal government went overboard with stimulus.

Many policymakers don’t believe there is such a thing as too much stimulus especially in an emergency. Either the government just found a solution to all future recessions or inflation is coming. If this is a new solution, every prior recession in the past few decades caused more harm than was necessary. The size of the inflation boost will tell us everything we need to know about whether this policy solution was a success. Of course, we aren’t minimizing the positives. The $600 weekly unemployment boost last year was the best-timed fiscal policy in decades. However, $1,400 payments this year to many people who have jobs, might be overdoing it.

The Source Of The Bubble

There are reports of a family office blowing up in March which caused forced block sales in some equities. That caused them to crash. It’s important to review the potential leverage in the system to determine if it’s possible other, bigger unwinds will occur. It’s notable that the decline in speculative software stocks hasn’t brought them to their historical average valuations (still expensive). If such a small decline in the Nasdaq can cause a blowup, we might be in for a shock when larger declines happen.

As you can see from the chart below, Nomura’s prime finance gross balances in the US exploded from June 2020 until February 2021. That’s a period when many stocks rallied. If other unwinds occur, they can cause a domino effect that causes more forced selling. Lower prices can act like a feedback loop just like momentum led us higher in the prior year. When valuations are extreme, there is no floor for prices when the momentum reverses, especially with low short interest.

Inflation Is Bad For Valuations

The chart below is yet another illustration of how important inflation is to valuations.

The most expensive high growth stocks would get killed by 3% core PCE inflation. That’s unlikely to occur though. It takes a lot to get core PCE inflation to move at all. Headline CPI could get to 3%. However, PCE inflation is usually below CPI. Core inflation will be lower than headline inflation this summer because energy prices are likely to increase. July 1992 was the last time core PCE inflation was above 3%. That’s an improbable feat in the current environment, at least at this point in time. With that being said, even 3% headline CPI will cause somewhat of a problem for the market; it should cause a major problem for stocks trading at above 20 times sales.

There has been a burst in activity in non-fungible tokens. This is noteworthy because it seems like right around when NFTs took off, the meme stocks started to fall. Bubbles popping haven’t catalyzed a return to normalcy in the past five years. Instead, new bubbles form. We are in the era of mini-bubbles. These crashes aren’t enough to impact the system luckily. They turn an asset into a gambling vehicle, leaving it worse off after the crash.

The ADP report was solid. It wasn’t the exciting report some bulls are whispering about though. Personal bankruptcies have been falling. They are half of what they were before the pandemic in 2019. The fiscal stimulus made sure of this. Now, it’s starting to look like the government is overdoing the support. Let’s see if that creates a big sustained rise in inflation. Core PCE is unlikely to get to 3%. That would impact the whole market significantly, not just expensive growth stocks. NFTs are the new shiny object, while meme stocks aren’t as popular as they were 6-8 weeks ago.