The Noise Is Real? 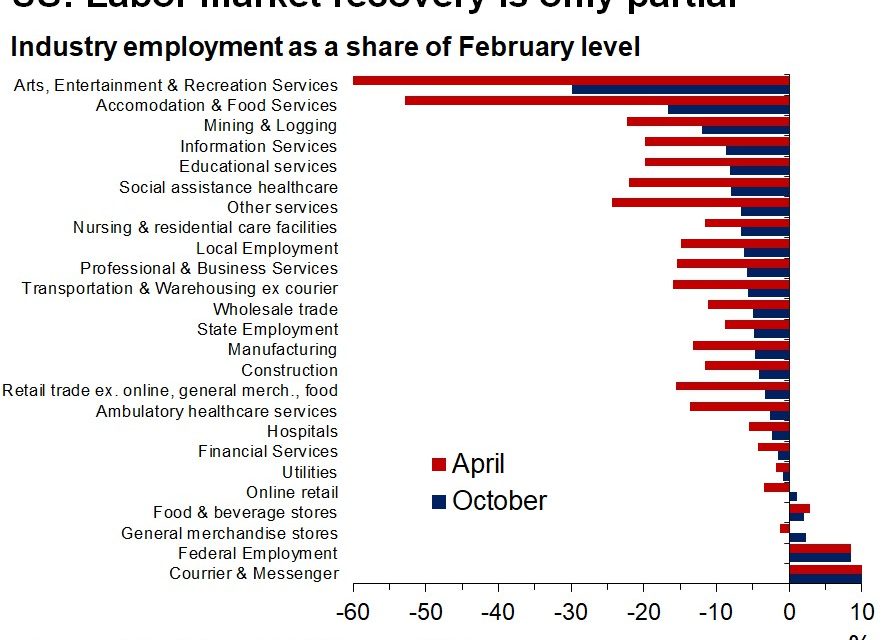 There is a common perception that short term market action is always noise. People especially are likely to think it is noise when it goes against their positions. For example, if you own a stock that’s down 10% in a few days, you probably will say it’s nothing. Generally, you do want to ignore noise, but not always.

Clearly, not every short term move is incorrect. The initial decline in February wasn’t noise. COVID-19 wasn’t noise. Now, the vaccine isn’t noise. This can reopen the economy in 2021. You can’t discount the market’s reaction as noise. It completely changes the outlook for the economy next year. We are already seeing people giving revisionist history that we already knew the vaccine would be effective. That’s crazy talk.

The stock market had one of its biggest sector rotations ever on Monday precisely because the vaccine wasn’t expected to be that effective. The 10 year yield is up from 77 basis points on November 5th to 97.9 basis points on the 10th, which was a new 6 month high, because investors became more certain about the potential for a cyclical upturn. We are seeing fast growing tech stocks fall after reporting EPS and sales beats and strong guidance because the market sees a future where tech isn’t as relied upon. It’s hard to underestimate an economic transition back to the way it was before the virus.

The market sometimes doesn’t properly price in events. However, if the event you are predicting will impact markets has already happened, you need to check your premises. The event we are referring to is the 3rd wave of COVID-19 cases. The vaccine caused the market to look past the virus because it could be gone by next year. We will have widespread testing, access to vaccines, and therapeutics. We have been discussing the 3rd wave for over one month. Yes, it will get worse. Yes, there are more hospitalizations than in the summer. However, the market will likely largely ignore this because it has. Try to find someone who doesn’t think COVID-19 will be bad in December that can change their mind (few exist). This doesn’t mean that you shouldn’t be concerned about risk of downside in the short-term (weeks/months) because of the impact that the virus has on the economy. Whether that risk is materialized or not is a different story.

Once investment banks started coming out with lists of stocks to avoid once the economy reopens, you knew we were about to enter a new paradigm (we saw these lists come out right before the vaccine data). We got the vaccine data about two weeks earlier than expected. Now, the economic outlook has changed. As you can see from the chart below, Goldman expects U.S. GDP to get back to its pre-COVID-19 level by Q2 or Q3 2021. Furthermore, it expects Europe to get back what it lost by Q4 2021. It is losing GDP in Q4 2020 because of its new lockdowns in November.

You can see Goldman puts in an acceleration sometime in the spring when the vaccine should be widely given out. Don’t bet against this occurring just because it ‘feels’ like markets overreacted. People said the market rallied too fast following the March bottom. They were wrong. When the facts change the market changes. In March, the facts that changed were that the Fed was buying corporate bonds and cases in Italy were peaking. The new facts here are the vaccine and therapeutics. A reopening of the economy is more important than a fiscal stimulus which is why the market doesn’t care as much about the lack of a big stimulus passing soon if ever.

Where The Jobs Will Be

The labor market is set to have another spike in job creation sometime early next year as businesses plan for a grand reopening. The jobs will be created in the industries most hurt such as arts, entertainment, and recreation services. On the other side, we could see some jobs lost in the hottest industries in the new economy. As you can see from the chart below, courier and messenger employment had the biggest employment growth from February to October.

At the least, that job growth will slow. We could even see layoffs as the economy reshapes. No one is saying the world will exactly go back to the way it was, but more people will work in offices and shop at stores than they do now. The market loves to get overly excited. It got too excited about the new economy. It could overcorrect in the next few months.

Now that Joe Biden is expected to be President, expect the NFIB survey to fall. That’s the historic precedent when a Democrat wins. For now, we have the October reading to review. The index stayed exactly the same at 104 which surprises us slightly because COVID-19 was a major issue in the Midwest last month. The 3rd wave didn’t start in November. The underlying results aren’t as boring as the headline. Uncertainty increased to the highest level since November 2016. That’s obviously related to the election. Let’s see if it falls after the election like it did 4 years ago.

Within this report, the net percentage of firms with plans to increase employment fell 5 points to 18%. The net percentage expecting the economy to improve also fell 5 points to 27%. The vaccine data would have changed this sentiment if it was known. The November report will be interesting because we have an expected new President and optimism about an economic reopening.

As you can see from the chart below, the percentage of firms planning to add to inventories hit a record high (up 12 points) going back to 1973.

You can see the question started being asked every month in the mid-1980s. This means small firms saw higher demand than expected. It caught them off guard so they are ordering more from suppliers. That will get the wheels of the economic machine going.

Investors are hard wired to ignore big shifts in the market, but you can’t ignore this one because we are faced with a major economic transition as the vaccine will allow the economy to get back to normal in 2021. We could easily see hundreds of thousands of leisure and hospitality jobs created this coming spring. Goldman sees U.S. GDP recovering by the middle of the year. Even before the vaccine came out and while COVID-19 was running rampant in the Midwest, the net percentage of small firms planning to add to inventories hit a record high.