The Market Is Wrong About Rate Hikes 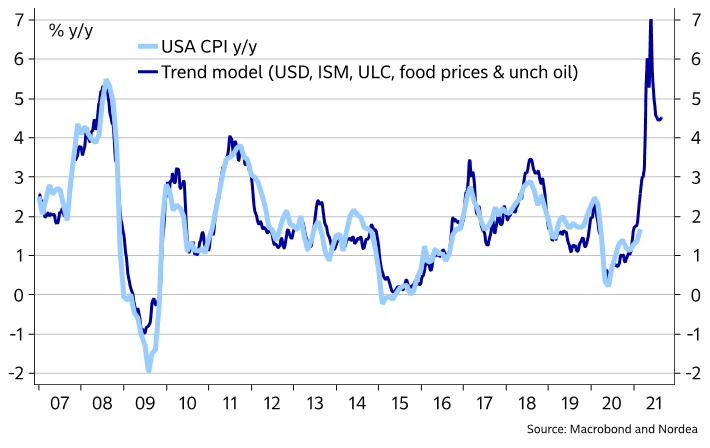 The latest jobless claims report from the week of April 3rd wasn’t great. This is one of the bears’ last credible arguments that the labor market isn’t accelerating. However, we wouldn’t hang our hats on this metric because of how unreliable claims have been since the pandemic began. Data has been all over the map due to mistakes and fraud. It’s entirely possible that claims drop 100,000 in a few weeks due to some type of adjustment we don’t realize needs to occur. Since the ISM surveys show companies can’t find enough workers and the BLS report showed almost 1 million jobs added in March, it’s hard to believe the labor market isn’t rapidly improving.

The huge decline in PUAs since the week of March 6th is almost all related to the data becoming more accurate. We find it a bit jarring that there are still 893,000 new total applicants each week given the strength in consumer spending and the reopening. It will be hugely problematic if claims stay above 700,000 through May because by that point the economy will almost be fully open. We think there will be a sharp decline in claims in the next few weeks due to the data getting better and more jobs being created.

Continuing claims in the week of March 27th fell slightly from 3.75 million to 3.734 million. This has always underestimated the problem during the pandemic. Unfortunately, the total number people on all benefits programs only fell 50,862 to 18,164,588. That’s pretty high since the economy is reopening. Obviously, this was a few weeks ago though. This should fall below 15 million by the end of April or something has gone very wrong.

Last year, there were 3.44 million people on all benefits programs. The 3rd week of March was one of the first weeks of bad data in 2020. Unfortunately, 1 year later the labor market isn’t better. We’re going to need a couple more months for that to happen. It’s pretty likely that by September, when the extra $300 per week runs out, it won’t be a big deal because most people will be employed again.

The JOLTS report from February was impressively strong considering the fact that we know the labor market got better in March. This definitely contradicts the jobless claims data. As you can see from the chart below, job openings rose from 7.099 million to 7.367 million which beat estimates for 6.85 million and the highest estimate on the street. Openings are above pre-pandemic levels and almost at the record high which was set last cycle. Hiring also improved. Hires were up from 5.465 million to 5.738 million. That’s only the highest since November, but it’s pretty close to the pre-pandemic reading of 5.979 million.

Last year the small business confidence index improved more than it probably should have given the dire circumstances facing these firms. We moved against relying on the NFIB index and switched to alternative data points like the one shown below. Alignable surveyed businesses in hard hit sectors asking them when they expect a full recovery in sales. 62% of small firms in the event management business don’t expect a full recovery until 2022 or later. If they are solely focused on America, this is too pessimistic of them. We will see a massive spike in gatherings following the end of the pandemic. Small firms in all these industries will power the next leg up in job creation this summer.

No one believes the spike in inflation this summer is going to be sustained. If you think you are contrarian by believing this spike will be temporary, think again. Powell thinks it will be temporary and so does the market. The 10 year yield wouldn’t be below 2% if inflation was expected to stick. It would probably be above 4% if that was the case.

As you can see from the chart below, utilizing the dollar, ISM, and ULC data, while keeping food and oil prices constant gets us to a 7% CPI reading in the next couple of months. The main question is how long inflation stays elevated and what level it falls to. If it stays above 4% for long, that could be a problem for the long bond and growth stocks.

The market is using the spike in inflation to justify expecting a higher Fed funds rate in 2022. As you can see from the chart below, the market is pricing in about an 86% chance of a hike next year. That’s going to be incorrect.

The Fed will not hike rates next year. If it was to hike rates next year, it would probably start guiding for the end of QE and a rate hike within the next 6 months. In other words, there will be another clash between the market and the Fed soon. The market always gets the next meeting’s decision correct, but often gets intermediate term predictions wrong. It will be interesting to see how a decline in expectations for a 2022 hike impacts markets. This should be good news for stocks.

Initial claims make the labor market look worse than it is. We expect them to fall sharply by the end of May. The JOLTS report was quite impressive even though it’s February data. March should be even better. Small businesses in hard hit areas of the economy will see a boom. Their confidence will increase this summer. The CPI report will get above 3% for a few months this year. Let’s see how long it stays there. The market expects a Fed rate hike in 2022, but that won’t happen.