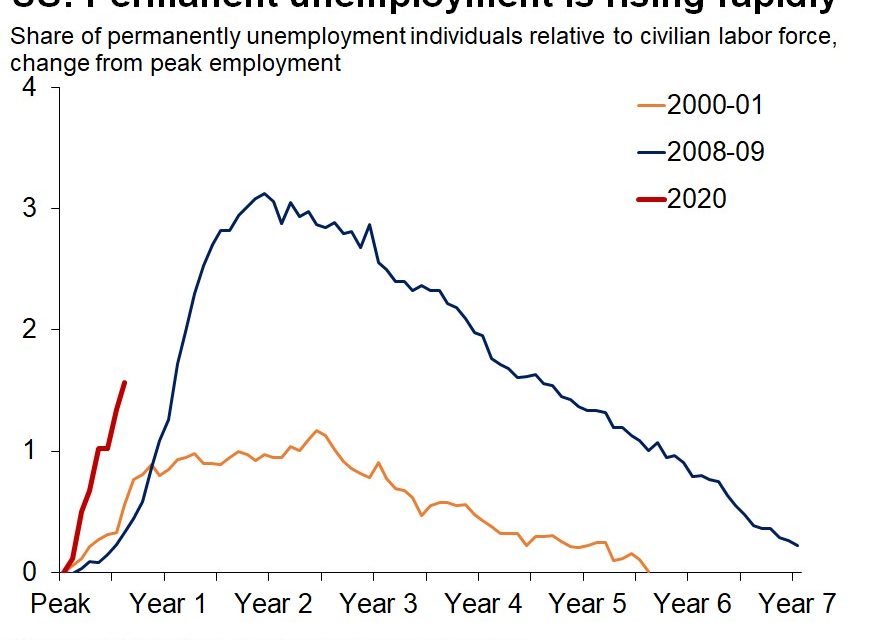 Government job creation played an important role in the September report as well, but this time in the opposite manner. There were 661,000 total jobs created in September which missed estimates for 894,000, but that’s misleading because there were 216,000 job losses from the government as the chart above shows. There were 877,000 private sector jobs added in September which only slightly missed estimates for 900,000. It wasn’t down much from August’s 1.022 million.

The government was only expected to lose 6,000 jobs because of the census. It actually lost 34,000 from the census, but that wasn’t the main reason jobs fell in the public sector. Instead, the losses came from local and state education which lost 291,000 and 49,000 jobs. Outside of education, local governments added 96,000 jobs. These losses in education are likely temporary which is good news. They were impacted by the late start to the school year. The chart below shows private sector job creation excluding education was the same as August. There wasn’t a slowdown like the headlines show.

The interesting aspect of this story is the education sector didn’t actually lose any jobs on a non-seasonally adjusted basis. It created jobs. Since this was September when so many children go back to school, the seasonal adjustment expected education to have created more jobs. However, as we said, schools opened later.

Leisure & Hospitality Gains Back Its Losses

On the other hand, all the job gains from the leisure and hospitality industry didn’t actually occur either. This industry created 318,000 seasonally adjusted jobs, but lost jobs on a non-seasonally adjusted basis because the industry usually loses jobs when the summer ends. It’s worth reviewing these aspects because seasonality was broken by COVID-19. This isn’t a normal year with normal seasonality. Leisure and hospitality simply didn’t cut as many jobs as it usually does because there were less to cut. As you can see from the chart below, the industry is still down 3.84 million jobs from February which is the most by far out of any industry.

The manufacturing sector created 66,000 jobs which doubled the consensus which shows how strong the cyclical upturn is. However, it was way below the 130,000 jobs estimated by ADP. It seemed clear ADP was too optimistic. This sector isn’t that labor intensive.

The correct way to look at these statistics is on a nominal basis. The total number of people temporarily unemployed fell from 6.16 million to 4.637 million. That decline got us 877,000 private sector jobs added. Of course, some people who became employed came from permanent unemployment and a few came from out of the labor market. However, there weren’t that many in those two categories as total permanent job losses rose from 3.41 million to 3.756 million and the labor force participation rate fell.

As you can see from the chart above, this recession is now worse than the 2001 one, but still not close to the 2007-2009 one which peaked at 6.818 million (the chart uses permanent percentage of peak employment). The key takeaway here is there are about 4 million easy to recover jobs left. The time is running out to get most of those people employed again. The problem is COVID-19 is still going, causing businesses such as independent restaurants to close.

The Worst Part Of The Report

There are 10.743 million fewer jobs than there were in February before the recession. Payrolls are 7.05% off the high. The unemployment rate fell from 8.4% to 7.9%. We had the perfect combination to get the rate lower as people left the labor force and more people got jobs. Obviously, we want the latter, but not the former. The good news is the underemployment rate fell from 14.2% to 12.8%. That means about 0.9% of the decline was related to less people working part time for economic reasons or being marginally attached the labor force.

That’s because the 16-24 age group are were all of the jobs went. Many of these are in the low paying jobs in the leisure and hostility industry. They are important to get back because low paying jobs took the brunt of the hit in this recession. Remember, there actually wasn’t any non-seasonally adjusted job creation in leisure and hospitality. It’s just that young people weren’t fired at as high of a rate as usual. We’re just speculating, but it’s possible that because of delayed start to school and some people doing online school/not going, young people had more time to work. Also, recognize that if COVID-19 gets worse, like it is in a few states in the Midwest, these jobs can go away again.

Private sector job creation barely fell in September compared to August. The government swung from creating a ton of jobs to losing jobs largely because of the delayed start to school. On the other hand, the job creation in leisure and hospitality, which was the highest out of any industry on a seasonally adjusted basis, can go away if COVID-19 comes back. Interesting, no jobs were actually created in leisure and hospitality and none were lost in education on a non-seasonally adjusted basis. That’s the magic of seasonal adjustments. September is a key month where people go back to school and summer activities end. The unemployment and underemployment rates fell, but the labor force participation rate also fell especially among prime age workers.