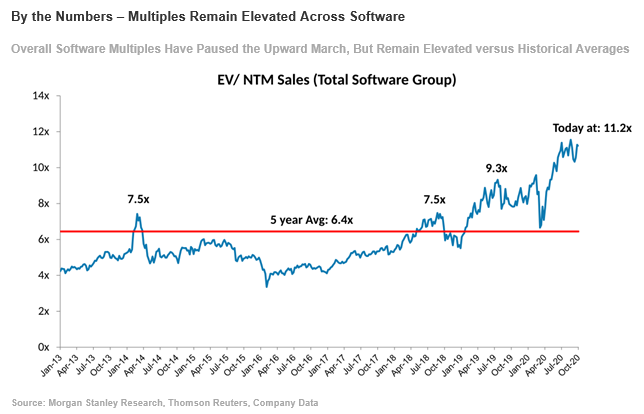 This has been a very unpredictable year. We have had a decade’s worth of news crammed into 1 year. Somehow in the midst of the chaos, the Fed believes it can figure out what the world will look like in 2026. To be clear, when talking about 2026, the Fed is literally making a forecast. However, as we have said many times, current guidance is about manipulating today’s market. Future policy is up in the air. It won’t matter to the 2020 market if we get to 2024-25 and the Fed actually raises rates; by then 2020 will be long gone.

As you can see in the quote from Chicago Fed President Evans in the graphic above, if inflation rises slightly above 2% in 2024, the average of the rate (starting in 2020) won’t get to 2% until 2026. In theory, the Fed would hike rates in 2026 in that made up scenario. The key point here is Evans completely made up the time the Fed should start the average. What if the Fed started the average in 2008? Then inflation could stay above 2% for even longer. These are the mental gymnastics Fed members go through to keep rates at zero. That’s not to say the Fed should raise rates. It’s just that the Fed is using its old way of thinking instead of reacting to the pandemic.

The Fed should be looking at COVID-19 to see when the economy will improve. Then it should wait a few quarters for the hardest hit areas to recover before hiking rates. It’s interesting that Evans says his made up scenario assumes great fiscal and health support. Firstly, fiscal support could boost inflation more than he thinks, albeit temporarily. Secondly, forecasting inflation linearly so far in the future is fruitless. We understand it’s just a framework; the problem is it’s not a good one. If it’s just oversimplifying to explain what an average is, that’s quite silly. We’ve known for a couple years that the Fed won’t go crazy with hikes the moment core inflation ticks above 2%.

There are misnomers about the election. The theory is if Biden wins, corporate tax hikes are coming, but they will be countered by a de-escalation of the trade war with China. Firstly, tax hikes are far from a certainty because the Dems need to win the Senate. Next, consider that having 51 or 52 Senators for 2 years doesn’t give the Dems absolute rule. There could easily be a few Democratic Senators who don’t go along with the plan if it’s controversial. It’s much harder to raise taxes and cut spending than it is to cut taxes and increase spending. Furthermore, if Biden wins, America and China won’t suddenly live in perfect harmony. Biden has talked tough on China. There has been a mini competition between Trump and Biden on who can talk tougher. Ending any geopolitical issues won’t counteract a tax increase (if taxes are actually raised).

The chart above shows the estimated earnings decline from three Biden tax proposals. As you can see, S&P 500 earnings can drop in the high single digits with communication services being hit the hardest. Energy would be hit the least. Frankly, many energy companies don’t have earnings to tax in the first place. That’s one benefit of losing money.

As we mentioned, if Biden wins, the issues with China won’t go away. Even though Trump and Biden differ on a lot, they don’t differ on everything. Biden will try a different strategy with China which might not involve tariffs, but it will cause some economic uncertainty. It’s extremely difficult to predict geopolitics for the next 4 years, but there are greater risks to the downside than the upside.

As you can see from the chart below, about 70% of Americans have an unfavorable opinion of China. This isn’t just Trump supporters. Both sides of the political spectrum don’t like China which is a problem since China and America’s economic relationship is the most important in the world.

The Bubble Is Still Here

Some might be thinking the Nasdaq 100’s 13% decline in September was enough to get rid of the froth in the market. That’s simply not true. When you have a bubble, a small correction doesn’t end it. As you can see from the chart below, the software industry’s EV to next 12 months of sales multiple is almost double the 5 year average. It’s a rough time to buy software stocks because we’re at peak demand growth since businesses and consumers have been forced to stay inside due to COVID-19. In Q1, the ratio of firms expecting IT spending to increase versus decrease was 2.4 times. In Q2, that fell to just 1.7 times which is 0.2 above the pre-pandemic reading.

The graphic below shows how small trader call options can have an outsized impact on the market. This goes into the details of how we had such a bubble in August. It was unimaginably large. Here’s a crazy stat: Square’s $80 billion market cap is larger than Goldman Sachs’ $69 billion market cap.

The Fed gave an example where it might not raise rates until 2026. It’s possible that in 2 years we look back on that statement and laugh because inflation is either much higher or lower than the Fed’s projection. If Biden wins and the Dems with the Senate, there might be a tax hike. It’s hard to hike taxes if there’s just a 1 or 2 seat majority. Nothing too controversial will pass. Biden is tough on China like Trump. The good news is tariffs might be admonished. Software still has bubble valuations and demand is increasing at a lesser rate. Small traders have had an outsized impact on the market because of options.