The End Of The Manufacturing Recession? 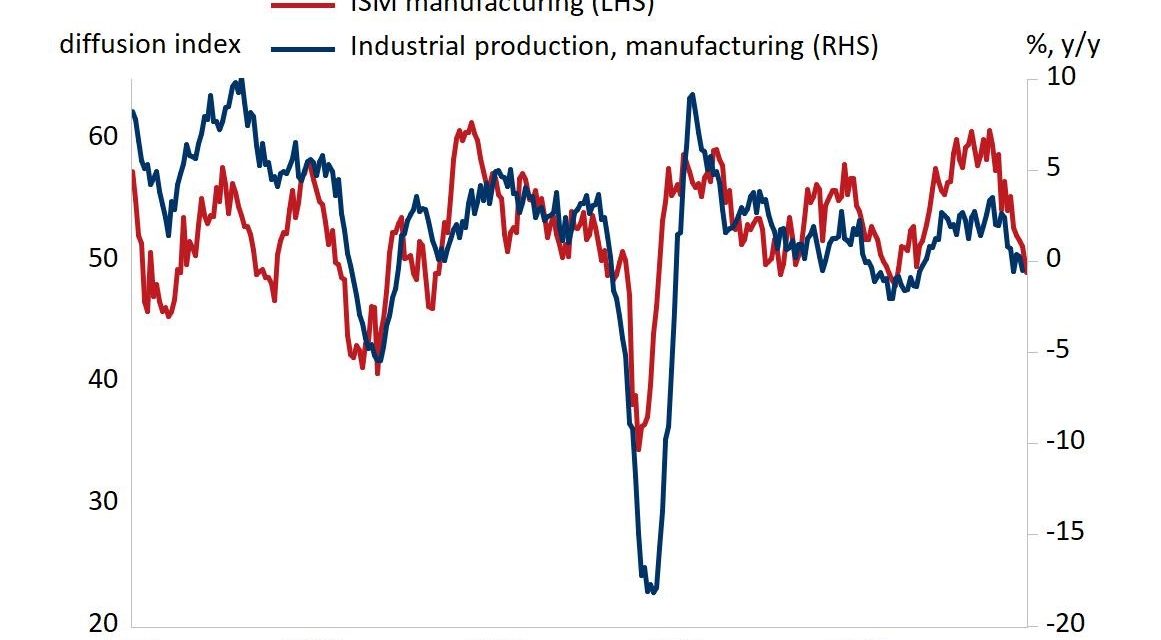 After the very weak ISM and Markit August manufacturing PMIs, it seemed clear the economy was destined for a terrible August industrial production report. That didn’t end up happening, although, manufacturing production was still down from last year. Some economists are saying the ISM report was way off because it asks firms how business is doing compared to the previous month and monthly production growth was great in this hard data report. However, as the chart below shows the ISM PMI is still highly correlated with yearly manufacturing production growth, so it’s not as if the report is a complete waste of time to review.

Is This A Manufacturing Recession?

Yearly growth wasn’t as strong. Yearly industrial production growth fell from 0.5% to 0.4%. This report depends on the eye of the beholder because 2 year stacked growth looks good. It improved from 4.4% to 5.7%. The August comp was the 2nd toughest comp of this mini-cycle. The results are similar for manufacturing production. Yearly growth improved from -0.5% to -0.4%. That’s the first back to back negative yearly growth readings since the fall of 2016 when the 2015-16 manufacturing recession was ending. The 2 year growth stack improved from 2.1% to 2.9%. The yearly growth trough in the last manufacturing recession was -2% in late 2015. There is broader weakness in this slowdown, but the depth isn’t there yet.

The mining industry had 1.4% monthly growth because it recovered from the damage created by hurricane Barry in July. Even so, yearly growth fell from 5.9% to 5.1%. The big difference between this manufacturing slowdown and the last manufacturing recession is mining production won’t get as bad because oil prices didn’t crater. Starting in November, yearly oil prices will either be barely down or up solidly. Mining production won’t fall 12.4% like it troughed at in April 2016.

The chart below shows how much worse the 3 month change in the 3 month average of industrial production was with energy versus without it in the 2015-2016 recession. The chart also shows the solid recent growth. Growth never got this high in the last recession. This is just 1 month of data, which can be revised, but if more reports like this come out, the manufacturing slowdown could be ending. If there is a cyclical upturn in 2020 and a trade deal this fall, the deal will be given the credit for the cyclical change just like the trade war was given all the blame for the cyclical downturn.

It’s doubtful much of the Housing Market index included data from after the recent rise in rates because low rates were said to be one of the causes of the rise in the index. Short term noise won’t change the trend in the housing market anyway. To be clear, the movement in rates was large at the start of September as the long bond index had its worst 10 day start to a month since at least 1987 and the average 30 year mortgage rate increased 36 basis points from the trough on September 4th. If rates continue to rise, discount this positive reading. If they don’t, it is valuable to study.

Specifically, it increased from 67 to 68 in September. The August reading was revised up 1 point to 67 (the chart doesn’t include this revision). As you can see from the chart below, this was the best reading since October 2018. The present sales index improved 3 points to 75 which was the best reading since May 2018. The 6 month expected sales index fell 1 point to 70. The prospective buyers index was steady at 50. It hasn’t shown improvement (above 50) since October 2018. The NAHB stated the shortage of skilled labor, lack of affordable building lots, and rising costs hurt affordability.

The Northeast was the star of this report as the index rose 8 points to 65, making it the 3rd best region. The Midwest was the worst as it was steady at 59. The South wasn’t hurt by hurricane Dorian as it rose 3 points to 72. The West was the best as it rose 1 point to 76.

What Would Cause A ‘Risk On’ Event?

The Bank of America September fund manager survey asked investors about the most bullish possible policies for risk assets. The chart below shows a German fiscal stimulus was the top answer. The 2nd most prominent was a 50 basis point Fed rate cut. That’s dubious because it could backfire and scare investors and consumers. The economy is in a slowdown, but the consumer is still spending strongly, making a double cut unnecessary. Even the manufacturing sector looks less bad now. Why cut 50 basis points in one meeting?

As you can see from the chart below, the net percentage of fund managers expecting a global recession in the next year hit -21%.

The manufacturing recession might just be a slowdown. It’s tough to say as the August industrial production report was solid, but the sector isn’t out of the woods yet. The NAHB Housing Market index showed great improvement in present sales and sales in the Northeast. A German fiscal stimulus was considered the best potential action for risk assets. A relatively high net percentage of fund managers see a global recession in the next year.