The Effects Of Heated Trade Rhetoric 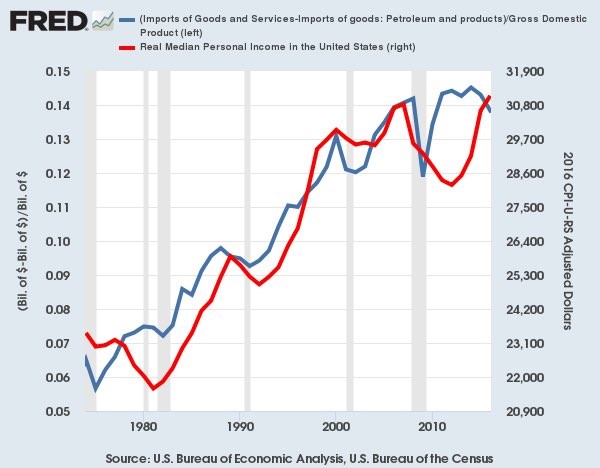 The intensifying trade talk between America and the EU and China have been the number one cause of market volatility this year. 9 out of the first 9 S&P 500 firms reporting earnings in Q2 beat estimates, but that’s irrelevant to the market when there is the potential for a trade war. The Charles Schwab chart below shows how the Russell 2000, which includes small caps that are domestically focused, has outperformed the Dow which includes multinational firms with many industrials. 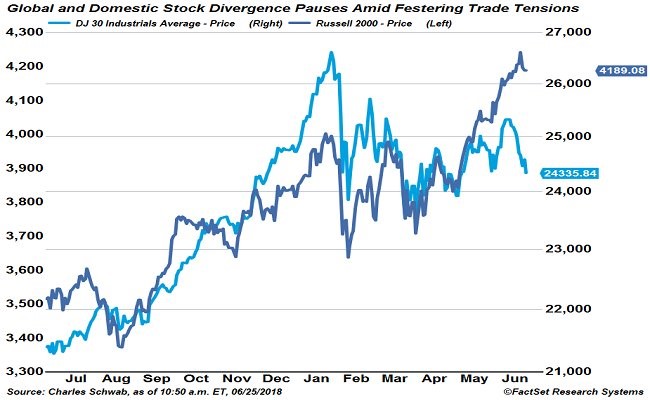 The domestic firms benefit from the strong dollar and can be helped by the protectionism which reduces the threat of foreign competition. The Dow Jones and S&P 500 are hurt by the strong dollar and tariffs since companies part of these indexes are multinationals that convert foreign profits into US dollars and benefit from trade. It’s possible that without these heated trade talks and with a lower dollar that the S&P 500 and Dow would be up almost as much as the Russell 2000 is now. As of the June 26th close, the Russell 2000 was up 8.66% year to date, while the S&P 500 was up 1.85% and the Dow was down 1.76% year to date.

The Wall Street Journal reported on Sunday that the Trump administration would propose to block any companies which have a 25% Chinese ownership or greater from investing or buying US firms with “industrial significant technology.” The negotiations between the US and China are unique because America’s largest deficit is with China, China has strategic importance in the North Korea geopolitical issue, and China is the country most associated with purportedly stealing American intellectual property. Since Trump wants a lower trade deficit and secure intellectual property, he’s definitely pushing the boundaries further with China than he is with other countries. Since he is demanding more from China than China is from America, you can say this is an advantage for him if you assume compromises meet in the middle.

The most bizarre part of this situation is after stocks sold off on this news on Monday, Treasury Secretary Steve Mnuchin tweeted that the statement about intellectual property will “not be specific to China, but to all countries that are trying to steal our technology.” This statement was odd because the President has mostly discussed Chinese IP theft. Secondly, the clarification made the market even more nervous because it opens America up for deeper trade battles with even more countries. Later Monday, Trump’s trade advisor Peter Navarro, who is known to support tariffs, stated in an interview that “There’s no plans to impose investment restrictions on any countries that are interfering in any way with our country. This is not the plan.” There is clearly contradiction by members of the White House team. This could be by design as tougher restrictions are floated to make the Chinese back down or it could be miscommunication.

The conclusion of this intellectual property dispute occurred on Wednesday when the President released plans to strengthen use of the Committee on Foreign Investment in the U.S. There was no specific 25% Chinese ownership restriction like mentioned in the Wall Street Journal story. Trump’s statement didn’t mention China. You can think of the lightened tone towards China as a change in strategy, while this move to strengthen CFIUS is a nudge in the protectionist direction. The House version of the bill puts more stringent reviews on investments from China, North Korea, Iran, Russia, and Venezuela. Reviews aren’t as negative for markets as blanket restrictions can be. This tactic where the White House didn’t go as far as the market feared is either a grand plan to get the market to accept changes or simply the White House seeing what it can get away with and backing down when stocks fall.

Effects Of The Tariffs

The stock market prices the trade dispute like other issues. It computes the expected probability of there being a real trade war factored in with the negative impact on corporate earnings. Game theory gives us the best understanding of how this issue will unfold. The options are: China gives in to Trump’s rhetoric, America folds to China, neither side folds causing a trade war, or both sides back down and compromise. The biggest worry is neither side backs down because it always makes sense to keep ratcheting up the stakes to make the other side lose.

The stock market plays an important role in this game because if US stocks fall, Trump could give in. A stock market correction could be the best option for the bulls. If either side is bluffing in the trade rhetoric, which there is currently no indication suggestion this to be the case, then this raises the stakes of the continued intensifying rhetoric which eventually could lead to the tariffs being raised so high that they could significantly derail global trade.

Most of the tariffs haven’t been implemented yet which explains why there’s not much data, other than from primary metals, explaining the impact of the trade war. The concept that the trade rhetoric is insignificant enough to ignore no longer applies because the game theory and the latest actions shows both sides are capable of escalating the tensions further.

The latest data point which shows the effect of the tariffs is the consumer confidence survey. Because China put a tariff on American soybean production, the west north central states, which include the largest soybean producers, saw their consumer confidence fall 22.6 points according to the Conference Board. There could be even bigger impacts seen in the next few weeks as the new tariffs are implemented. This gives Trump less time to negotiate from a position of strength.

We will leave you with the point that trade is good. It allows for specialization which provides producers with efficiency gains. These gains are passed on to the consumer which increases purchasing power. The American consumer has a plethora of cheap options for many goods because of globalization. The FRED chart below compares the real median personal income to the imports of goods and services minus the imports of oil products divided by GDP.

The two metrics are correlated and have increased in the past few decades as the US consumer has benefited consistently with increases in globalization. Sustained tariffs and trade barriers would prevent firms from continuing to make progress, hence hurting consumers. It doesn’t seem like a realistic option worth pursuing when you consider the increases in the standard of living in the past 40 years and number of choices available to Americans.