The Bulls Are Too Confident 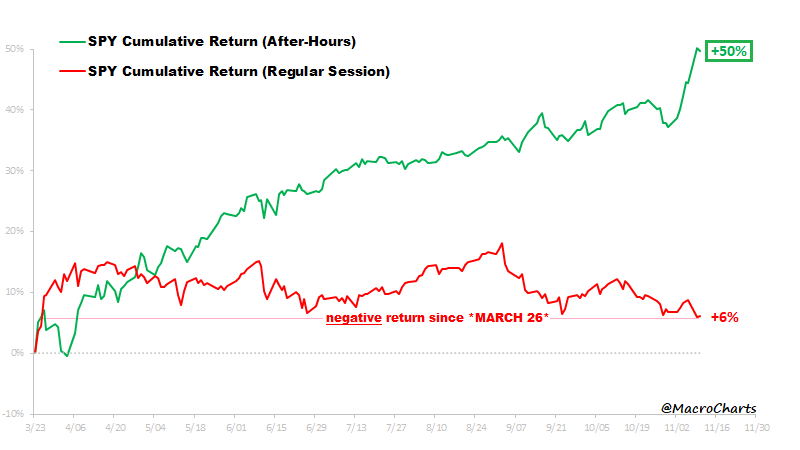 As of Wednesday, the stock market is in a state of euphoria similar to other major tops. The S&P 500 rose 9.26% in the past 8 days. That’s about a year’s worth of returns in less than 2 weeks. Election related hedges unwound and we got good news on the Pfizer vaccine as it is 90% effective. The problem is the market had its dessert without eating its vegetables. If the work from home and online retail plays fell as much as the cyclical value stocks rose, the market would have fallen because FAANMG is much bigger than the banks and energy combined. The software stocks fell, but not close to the amount they rose since March. This week has been a blip on the charts if you zoom out a year. This rally has had broad participation. As you can see from the chart below, 76.5% of Russell 3000 stocks are above their 200 day moving average which is the highest since 2013. Most of the market is overbought. Cyclical stocks are overbought on a short-term basis and growth stocks are expensive. That’s a terrible combination.

The vaccine catalyzed intense optimism. Furthermore, the tech stocks fell which was a bullish catalyst for this survey because many respondents have stated in the past few months that there was a tech bubble. Most of the bulls came from being neutral. Neutral fell 11.3 points to 19.3% which is way below the average of 31.5%. The percentage of bears isn’t extremely low as it fell 6.6 points to 24.9% which is slightly below the historical average of 30.5%.

As you can see from the chart below, since March 26th, the S&P 500 is only up 6% in the regular trading session, while it is up 50% in the after hours session. Some investors assume funny business, but there isn’t any. Investors holding stocks overnight are taking extra risks. They were rewarded for that risk in a very unstable time. Holding stocks over the weekend in April was a risk that was rewarded handsomely. We have had many extremely strong Monday rallies in this bull run.

COVID-19 To Be A Fall Disaster

It’s amazing that there is such euphoria in markets amidst the heartbreak that is COVID-19. The 7 day average of deaths from COVID-19 is 1,080 which is only 101 below the peak on August 4th. With hospitalizations higher than the summer peak, it’s highly likely deaths will rise further. The economic restrictions are coming even if there aren’t outright shutdowns.

People are fatigued by COVID-19, but the headlines probably will scare policymakers into action. In New York, gyms, restaurants, and bars must close at 10PM starting on Friday. The restrictions will increase as the positive test rate increases. Pfizer is only able to produce 25 million vaccines globally by the end of the year. The good news is Moderna’s vaccine is very similar which means we are likely to have two companies focused on distributing them. Moderna will be providing preliminary results soon. The fact that the results have been delayed could suggest that the effectiveness of the vaccine is high because it is taking longer for people to get the virus that got the vaccine (not the placebo).

It’s possible that many of the businesses who said they wouldn’t survive from April to September already folded. This month’s survey likely took place before the vaccine results came out which means small firms might be more confident now. However, if they barely have enough funding, they might actually be more negative because the near term looks worse than before. The next two months will be so bad for many firms that they won’t make it to the likely reopening of the economy in the spring/summer.

The chart below shows the number of new business applications with a high propensity to have a payroll has increased dramatically in the past few months. Disruption creates opportunity. Plus, there were millions of people who lost their job who needed a new source of income. It is easier than ever to create a business online. This is likely where a majority of businesses were created since social distancing rules are still in effect.

The million-dollar question is how many of these firms survive once the economy normalizes. Part of that answer depends on what the new normal looks like. We could see online shopping as a percentage of consumer spending fall and more people go back to the office. However, some online shopping will stick and we should see a movement towards flexible work schedules (at home & in the office).

The vaccine and election have catalyzed euphoric speculation in the stock market as it has had a year’s worth of gains in eight days. The investor sentiment survey is the most bullish since January 2018. Investors have gotten paid handsomely to own stocks after hours because of the added risk. Small businesses are less confident about their survival as they face a dreadful December because of COVID-19. The good news is this disruption catalyzed a record-breaking number of new businesses that have a high likelihood of hiring workers.